Who Will Win the Rugby World Cup

It started with an off-the-cuff conversation in the office. I’m pretty excited about it already. Others couldn’t care less. But let’s ignore those people.

And now, with just under a year until the 2015 Rugby World Cup kicks off, we’ve delved into the passionate, whole hearted conversation surrounding the competition and picked out a whole bunch of stats about what people (other than just us here in the office) really think about the tournament.

Using Brandwatch Analytics to gather, segment and present our data we’ve been able to find everything from which stadium people want to visit, to which team they want to win.

The tickets are on sale…

Purchasing tickets can often be a difficult issue when hosting an international sporting event – concerns about price and availability are often common complaints.

Tickets for the 2015 RWC have been on sale for a month now, and our data reveals some interesting facts about it:

What are the games we want to watch?

Despite the competition being almost a year away, the games for the group stage have already been announced.

We looked into the numbers and we’ve been able to find which of the 26 games people are most excited about.

Here are the top 16 games people are most excited about:

Unsurprisingly, England’s match against close neighbors Wales, has caused the most buzz.

Which stadiums do we want to check out?

The fixtures for the RWC have been spread out across England and Wales in 13 different stadiums, giving British men and women from all around the nation a chance to see a game without traveling large distances.

Using social listening, we’ve been able to find the stadiums fans are most excited to go to and also the stadiums that aren’t generating a great deal of enthusiasm. 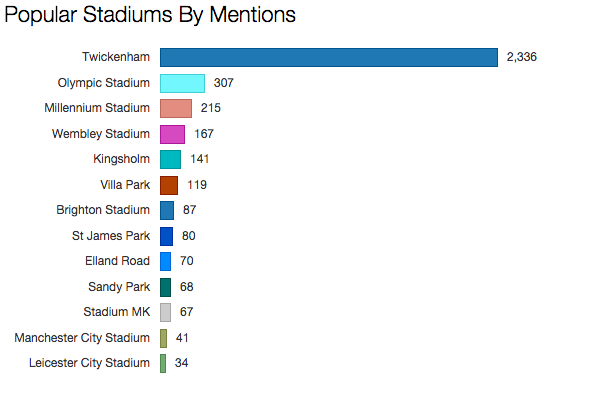 The home of English Rugby, Twickenham, comes first by a great distance.

Interestingly, the Olympic Stadium comes in second, ahead of the Welsh home of rugby – the Millennium Stadium.

Who do we want to support?

Whether you are a life long fan or a first time viewer, there’s probably a team you’ve thought about supporting for next year’s World Cup.

By analyzing the mentions of all 19 countries taking part (1 more country will be decided later via a playoff), we’ve found how popular each of the teams are:

Boosted by the prospect of performing in front of a home crowd, England lead the way with the lion’s share of the support – 31%. New Zealand come in second with 13.6% and Wales just behind with 12.9%.

Interestingly, when we combine the United Kingdom nations (England, Wales and Scotland) we see they make up 53.4% of all supporters. Currently, it’s clear the majority of online support is coming from within the British Isles where the competition is being hosted.

And who do we think will win?

The answer you’ve all been waiting for!

Who will win the 2015 Rugby World Cup? To figure this out, we’ve looked for predictions from professional content such as news articles and social content from blogs, forums and social networks.

We added each of these predictions together to find the team that the majority of people thought would win, and here’s what we found:

It turns out that a whopping 84% think that England will lift the golden trophy this time next year.

New Zealand and Australia come in second and third, but it’s clear the vast majority think that England will win their second World Cup in 2015. Now the long wait begins…

You can find data like this for yourself using Brandwatch Analytics, take a look at how it works here and get a demo!