Much like any other business connecting to customers, the use of social media for nonprofits is helping charities to connect with supporters and donors.

Much like any other business connecting to their customers, the use of social media for nonprofits is helping charities to connect with supporters and donors. According to [ed: possibly slightly dubious] research collected for this recent infographic, 98% of nonprofits are on Facebook and 74% are on Twitter.

Social media allows for much more than collecting donations; a good social media strategy for nonprofits can attract new supporters, raise awareness around issues, and put pressure on politicians and corporations. Here are three examples of nonprofits that use social media successfully to further their cause…

One of the most recognizable nonprofits in the world, Amnesty International has found success with social media by mobilizing their large support base and wielding their influence to make change.

Dialogue with People in Power

Amnesty International uses their social profiles to encourage politicians and lawmakers to support their issues.

By tweeting this in front of their nearly 100,000 Twitter followers, it also puts pressure on the politician since it’s done in front of such a large audience. 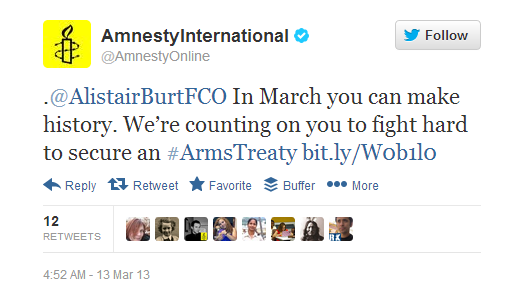 Content is well-coordinated across different social platforms, which increases the number of people a message gets in front of and can potentially increase involvement.

On the same day that they tweeted Alistair Burt, Amnesty International posted about the same issue on its Facebook page. 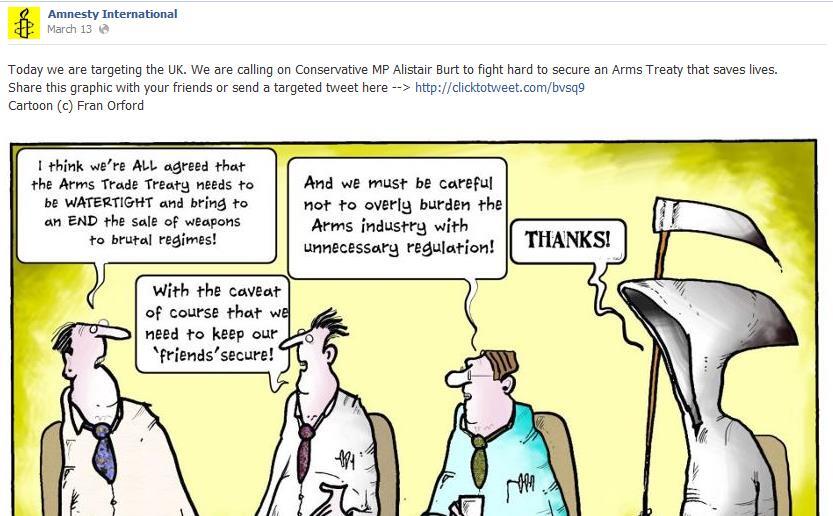 On their Facebook page, Amnesty International “likes” their international offices, which lets followers know they can also support the organization within their home country. 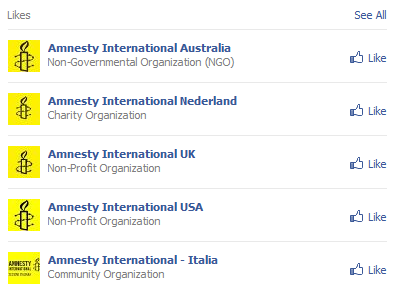 Like Amnesty International, Greenpeace uses social media to call out corporations and politicians. They recently pressured the supermarket chain Waitrose to cut its ties with Shell after getting 40,000 people to sign a petition.

According to this PR Week article, Greenpeace Executive Director John Sauven credited social media for much of the campaign’s success. But it doesn’t stop there…

In yet another campaign aimed against Shell, Greenpeace teamed with other anti-Shell groups and hijacked the oil company’s identity on a microsite called “Arctic Ready”.

Here, it appeared the company’s social media efforts had gone off the rails when fake user-generate anti-Shell ads started appearing on the microsite. A fake Twitter account appeared to be Shell trying to do damage control, but this was really the environmental groups.

The hoax attracted a lot of media attention, so while the campaign was controversial, it succeeded at getting Greenpeace’s mission in the spotlight. Interestingly enough, sometimes a regional arm of a nonprofit will have more success online than the parent organization (an example of this is Greenpeace Brasil, which at one point had more social followers than Greenpeace International).

This is proof that no matter how technologically connected the world becomes, most nonprofit success still begins at a grassroots level.

Providing additional social profiles for certain regions allows a nonprofit to focus on the issues that matter most to that area’s population. The increasingly visual aspect of social media works in favor of nonprofits who can say 1,000 words with an image. Oceana is one such nonprofit capitalizing on reaching supporters through visualizations.

Appeal to Emotions with Powerful Images

On all of their social profiles, Oceana uses strong imagery to get their supporters’ attention. Since they are advocates of marine life protection, sharing related photos and videos is an effective way to tug at supporter’s heartstrings. Unfortunately, they stopped updating Instagram profile, which could have also been an effective platform for reaching new supporters.

After releasing the findings of a seafood study, Oceana took it one step further and created visuals to share on their social profiles. By linking to a related petition within the image caption, they not doubt got a surge of support. As you can see, 174 of their followers shared the image, which greatly increased its reach. 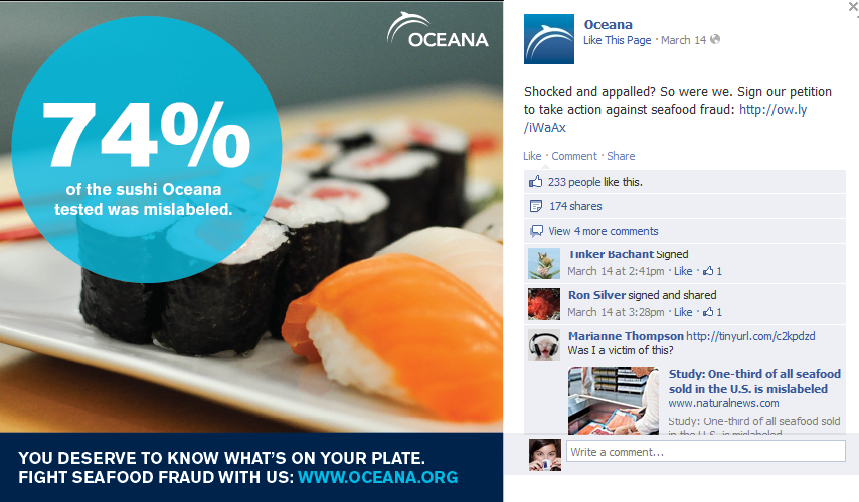 The type of support and action that used to cost thousands and take months to organize can be done in a matter of days or hours with a good social media strategy for nonprofits. With a smartphone or ultrabook etc, nonprofit supporters can stay connected 24/7 to the causes that matter most to them.

Which nonprofits are you most impressed with on social media?