Gucci vs Versace. This comparison pits the social media presence of two of the biggest fashion names against one another. Who will win this month?

Welcome to the fifth in the social presence showdown series, where competitors are measured, scrutinized and ultimately, a single leader is determined.

We’ve previously compared Coke against Pepsi, Mercedes vs. BMW and Pixar against DreamWorks.

Today we examine two hard-hitters in the fashion industry game: Gucci and Versace.

Gucci and Versace, both headquartered in Italy, are arguably the most recognizable names in luxury fashion.

Interestingly, they also happen to be the two most popular designers in rap music, according to GQ.

Yet today we’ll put the views of Migos and Kreayshawn aside. Instead, today’s analysis will examine the public conversations surrounding the two brands online to understand which brand has a stronger social presence.

Today, we’ll analyze the social conversations surrounding both brands to determine which, according to online audiences, is the leader in luxury fashion.

In terms of the volume of conversation, the results are mixed. 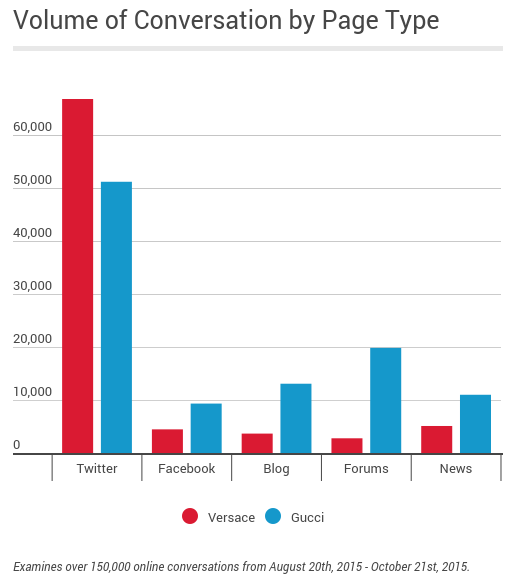 For the time period analyzed, Versace received 31% more tweets than Gucci did. However, on Facebook, blogs, forums and news sites, Gucci was the more popular brand.

Still, for luxury fashion brands, generating the greatest volume of conversation is often not the goal. These brands aren’t targeting everyone, but rather those who are willing and capable of spending extra on high-end products.

The following analysis reveals which states lean towards which brands in terms of overall conversation.

Not all press is good press

Luxury fashion businesses have traditionally held a firm grasp of their brand. One of the reasons the industry as a whole has been so hesitant to adopt in-depth social media strategies is that social allows everyone to publicly express any opinion about a brand.

Yet what many businesses do not realize is that those conversations will happen regardless of whether the brand does or does not create social accounts.

In this case, Versace’s sentiment is 5.3 percentage points more positive than Gucci’s.

Digging into the negative tweets surrounding Gucci reveals that consumers are most often disappointed in the company’s customer service and the quality of their jewelry.

Although Versace received complaints surrounding customer service and disapproval of some of their dresses, the negative comments were fewer and more dispersed.

The final clue: The Fashion Index

In this case, declaring a single winner is difficult.

The brief analysis exposes pros and cons to both brands: Gucci is more popular in the fashion capital of New York City and generates more conversation on Facebook, blogs, forums and news sites while Versace is generally more discussed in ultra-high net worth areas, is a more popular topic on Twitter and has stronger net sentiment.

Yet reviewing their scores on the luxury fashion social index reveals a little more about these brands’ online presence.

Namely, Gucci’s social presence and online following, as tracked by Reach Growth, are expanding rapidly. In fact, they ranked the third highest in terms of Reach Growth, just behind Tory Burch and Prada.

Meanwhile, Versace outperforms Gucci for Engagement & Content, which measures how well they effectively respond to their consumers and how well their content performs. In the context of Gucci’s customer service complaints, the analysis suggests that the brand may not be effectively listening and responding to their audience.

In a rare upset, Versace is ultimately the victor despite having a lower rank in the luxury fashion social index.

However, it’s important to note that Gucci is well positioned for the future. They have one of the highest Reach Growth scores in the industry and have clearly activated a key demographic: New Yorkers.

Today, Versace wins – but in three months time the data may tell a completely different story.