The social presence showdown: the definitive series on which brand the online world prefers.

As of now, we’ve explored the endless soda wars between Coca-Cola and Pepsi, as well as the race between Mercedes and BMW. In this month’s edition, we’ll examine two of the biggest names in animation: Pixar and DreamWorks.

Although it feels somewhat tasteless to pit the likes of Shrek against that of Wall-E, for the sake of the showdown we’ll have to suspend our idealistic conception of these two competitors.

This month’s aim is to determine which brand inspires more advocacy online.

As the analysis only examines 2015 data, the social conversation specifically casts DreamWork’s Home against Pixar’s Inside Out.

Now for the data dump…

In terms of the overall conversation, Pixar is a clear favorite. 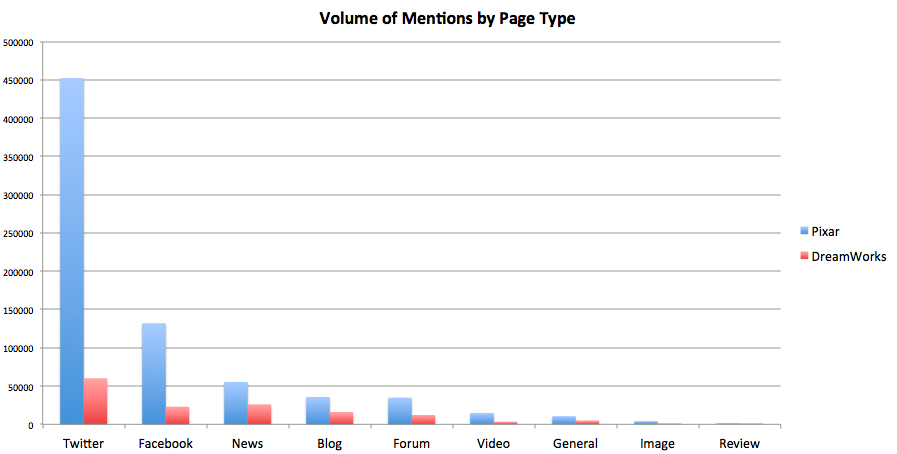 An overwhelming 88% of the online conversations gathered were directed at Pixar. A difference that large strongly suggests that Pixar has simply been a more popular topic in 2015.

Still, the analysis cannot end at the volume of mentions. Human emotions and opinions are not binary. We’ll need far more information about the context and intention of these conversations to determine which brand leads in 2015.

Adding context to the numbers

Pixar and DreamWorks movies are undoubtedly entertaining. Yet anyone who has seen Wall-E, Kung Fu Panda, Shrek or Ratatouille will recognize that the aim extends beyond the sedating effects of entertainment – their films intend to instil emotion and inspire hope in their audiences.

As such, an examination of the audience’s response to a DreamWorks or Pixar film cannot be confined to a simple Positive-Negative sentiment analysis.

The following analysis examines how often each brand is mentioned alongside several key adjectives or emotional terms.

Again, the online audience seems to discuss Pixar with more emotional terms than with DreamWorks for all the terms analyzed.

However, that may be a byproduct of the fact that people discuss Pixar far more often. As a proportion of the total brand chatter, these emotional terms are used in 30% of DreamWorks conversations but just 23% of Pixar’s mentions.

Is it possible that DreamWorks inspires a higher percentage of its viewers but simply has fewer viewers?

To answer that question, we’ll direct our analysis away from aggregate data toward a select group of specific conversations.

Namely, we want to know what people say when they compare the two brands directly.

When reviewing the actual opinions of those comparing Pixar and DreamWorks, two things become apparent.

Firstly, people prefer Pixar. Of the 80 tweets analyzed, Pixar was the favorite just under twice as much as DreamWorks.

Second, the public is generally excited about Home. The Tweet above provides a decent summary of the conversation. Viewers were pleasantly surprised by the film, which changed many preconceptions about DreamWorks and Pixar.

For this month’s showdown, Pixar is the winner.

They drive more conversation, inspire a greater number of viewers, and are cited as the preferred production company by more people.

Yet the dialogue is not unanimous – underneath the “nearly flawless run of Pixar” films lies a smaller yet devoted audience that is awaiting the underdog’s surprises.