Mobile Apps: Banks On the Move

How do Asia-Pacific consumers rate their mobile banking apps?

The rise of the smartphone has brought the era of mobile banking along with it. Today’s financial consumer expects maximum convenience, and that extends as far as their daily banking needs.

Now, any bank worth its salt offers customers its own mobile app, where they can perform tasks such as checking balances, making transfers and setting up regular payments.

Many banks, especially challenger banks, also package their apps with the ability for consumers to track spending and budget more effectively. With such a surge of convenience, you’d expect banking customers to be happier with the industry than ever before. But what are they really saying? Analysing online conversations is a sure-fire way to find out.

Asia-Pacific is home to leading financial centres Hong Kong and Singapore, along with the emerging banking destination of China, complete with the largest population of consumers of any country in the world. With regional consumer conversations around mobile banking on the rise, the region is showing distinct signs of increased interest in this trend.

In fact, a 2018 report from consultants McKinsey and Company found that 52% of bank customers in the region’s developing nations were using digital banking services, an significant increase from 33% just four years earlier. In the region’s developed countries (including Japan, Australia, New Zealand, Singapore, South Korea, Hong Kong and Taiwan) use of digital banking rose to 97% among city-based bank customers, increasing from from 92% three years ago. 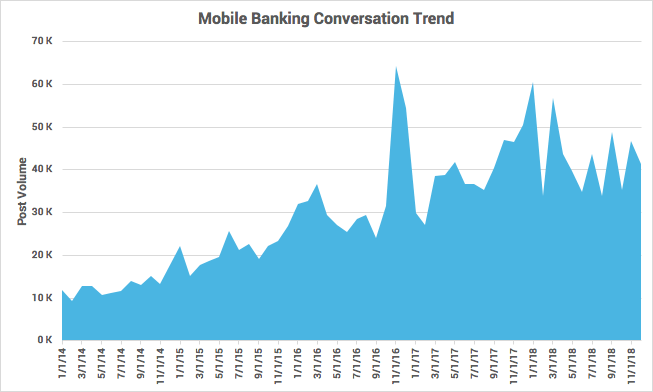 China is making strong headway as a force to be reckoned with in the region’s banking industry – and also in the online conversation about mobile banking. In terms of share of voice, assorted Chinese banks dominate. Bank of China accounts for the largest proportion, closely followed by China Construction Bank and ICBC. Outside of China, the Australian bank ANZ is the most significant contender, but its proportion of the discussion remains low compared to the Chinese banks. 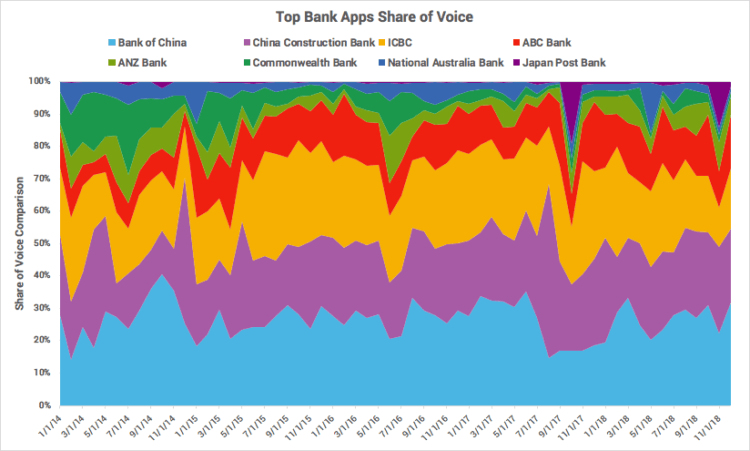 When it comes to commenting and discussing topics online, many consumers tend to be more vocal about the things they’re unhappy with. In the financial services industry, especially with the new crop of challenger banks, successful products and services can cause a ripple of excitement to spread among consumers. But they can also be quick to speak out critically about the negatives, so it’s important for banks to be wary of this inclination.

Looking at the sentiment of the discussion among a range of APAC banks, we can see that the Bank of China and ABC Group are the most positively discussed banks overall. In contrast, ABC, ICBC and Japan Post Bank attract the most negative sentiment, while the latter bank also scores the lowest in positive sentiment. It seems that Japan Post is doing something wrong, because its customers certainly aren’t happy. 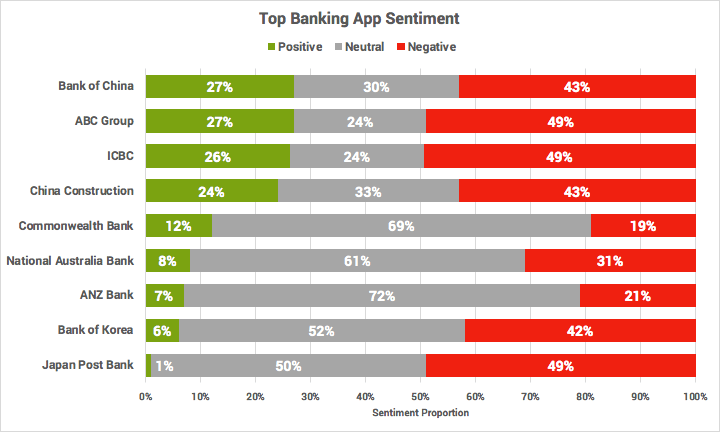 This is useful information about consumers’ general sentiment towards different banks, but it would be even more useful to know the specific topics and concerns that are driving their conversation. Below we can see that check depositing is the number one concern for mobile banking consumers in APAC. This likely relates to the traditional inconvenience of visiting banks in person to deposit checks, which goes against the ethos of 21st century mobile-first banking. 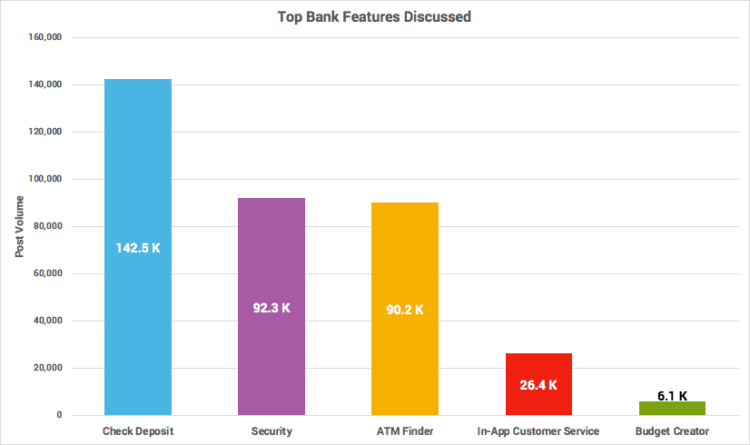 Many mobile banking apps now offer their customers the facility to deposit checks by photographing them within the app, a move which gets rid of a long-standing inconvenience.

Security is the next most-discussed concern, followed by the topic of ATM finders. Knowing that customers are discussing these topics can help banks to understand which apps are the most well-received among consumers, and which features might be worth including in future app upgrades and developments.

Mobile banking is a fast-growing industry, but at the same time it’s one where consumers have particular sensitivities around key issues, such as security. They are quick to complain, yet reticent to praise.

To stay ahead of the curve, banks should monitor consumer conversation carefully, to understand exactly where their brand is performing well and where it might be falling short.