How are consumers in the Asia-Pacific region talking about virtual and augmented reality?

The Asia-Pacific region is no stranger to the craze for virtual and augmented reality  that’s currently sweeping the globe. Once confined to science fiction movies and computer laboratories, virtual reality is now popping up in many different walks of life, offering audiences unique experiences in sport, travel, entertainment, and education.

Although virtual reality technology has existed in one form or another for many decades,  it was the Oculus Rift that really brought VR into the mainstream. Released in 2010, this groundbreaking headset allows the wearer to immerse themselves in multiple different worlds, whether escaping the winter blues for a sunny beach, watching sports from their own personal virtual stadium, or even jetting off into outer space.

One of the most popular uses for virtual reality technology has been in video games.  This is where Asia-Pacific has spearheaded the VR/AR revolution, with the region’s companies, such as Sony, Nintendo and Sega, turning out exciting products that would bring virtual reality to a whole host of new audiences worldwide.

The technology is also becoming deeply rooted among consumers in regional heavyweight China. According to a 2017 survey conducted by payments firm WorldPay, a massive 95% of Chinese consumers said they’d used VR or AR technology in the last three months.

Virtual reality can help people access new experiences even when they have limited means, for example, in education, where some MOOCs are now offering courses delivered via immersive virtual reality formats.

As with any popular new technology, virtual reality is evolving at a rapid pace. It might seem like a dream come true, but unless virtual reality brands gain a good grasp on consumer opinion, they risk missing out on knowledge of key trends and challenges that could make or break their chances of success in the fast-growing Asia-Pacific region.

Before diving deeper into the finer details, it’s important to take a look at the big picture and see how regional conversation trends around about the topic of virtual reality have been shifting over time. 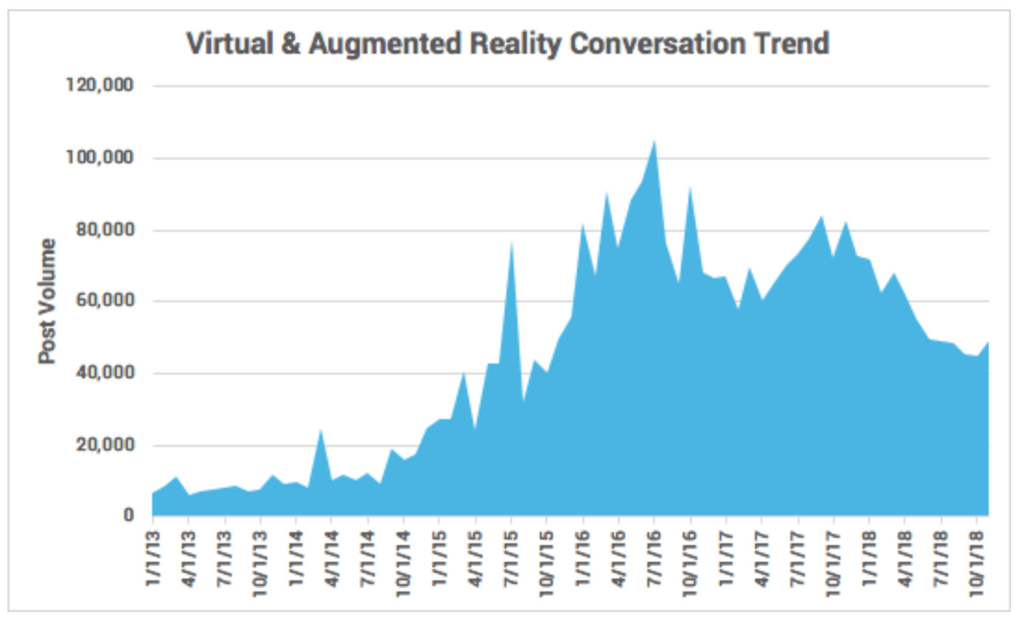 In the above chart we can see that the volume of online discussion about virtual and augmented reality peaked in summer of 2016, before gradually decreasing to its current level, less than half of the height reached at its peak. This could mean that the technologies are becoming better integrated into normal daily life and hence less noteworthy.

As Asia-Pacific is such a large and diverse region, it’s quite likely that the uptake of new technologies could be unevenly distributed across the different countries. Below, we can see that some of the countries with the highest GDP levels in the region – such as Australia, Singapore, New Zealand and Japan – are also the ones with the highest volumes of discussion about virtual reality technology. One might expect to find China high on this list, but the country’s lack of conventional social media platforms (Twitter and Facebook) is likely to skew its results. 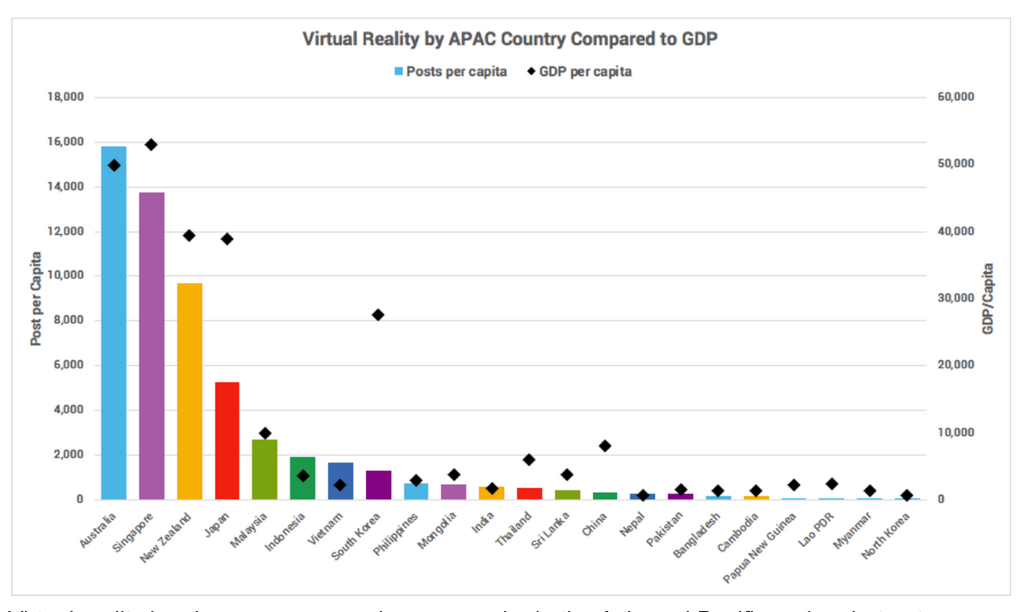 Another important goal for marketers is to gain a deeper understanding of their audiences preferences. It’s really important to have well-rounded knowledge in order to craft more resonant marketing campaigns. One powerful way of doing this is by identifying additional topics that audiences are discussing alongside virtual reality. These affinities help construct a truer picture of audience interests. 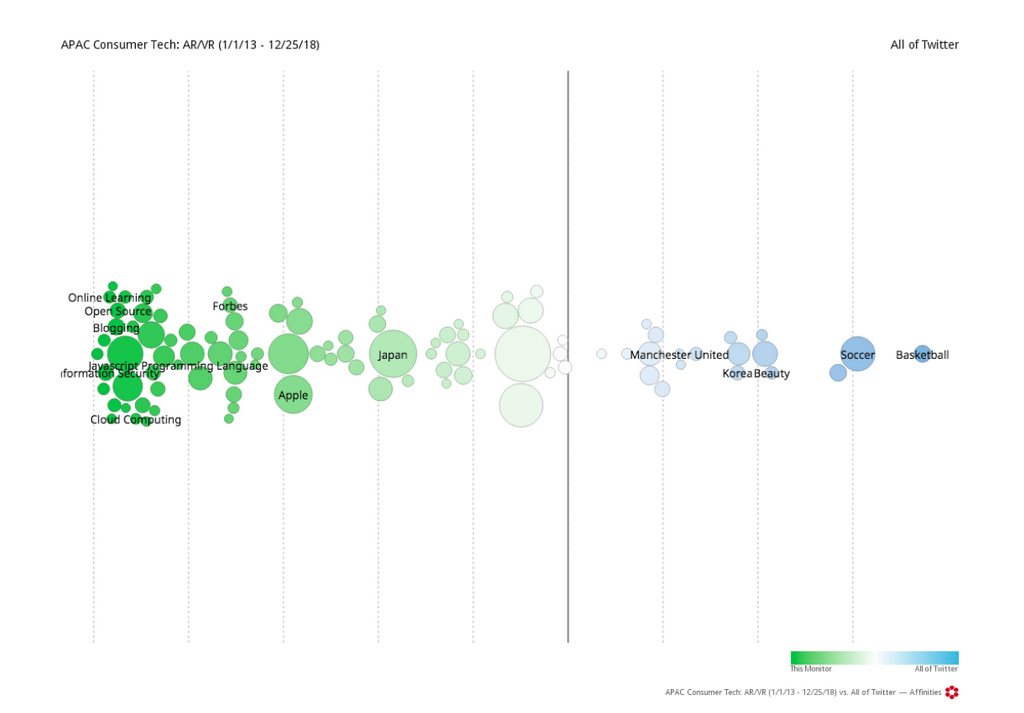 Perhaps unsurprisingly, the typical audience that discusses virtual reality also discusses many other technology-related topics, such as open source, cloud computing and programming. This tells us that Asia-Pacific consumers who are interested in virtual reality tend to be more technically minded and likely to work in tech-related roles. For typical marketing tasks such as creating consumer personas, this offers an important first step.

Virtual reality and augmented reality seem to have already hit a peak in popularity across the Asia-Pacific region. Discussion volume has declined since then, reaching a plateau in early 2018. Survey data, such as that from Worldpay, supports the idea that lower discussion volumes may be due to VR and AR technology becoming a normal part of daily life in the region, which may still spell good news for brands looking to make headway there.

Want to learn more about trends in the consumer electronics industry in the APAC region? Read our report Consumer Technology for the Asia-Pacific Market!