Director of Analytics at Ignite, Ryan Sweeney, settles an age-old debate: are cats or dogs more popular on Instagram?

Full disclosure, this blog post was fueled entirely by a pro-dog agenda.

My wife and I have a bit of a menagerie: one dog, two permanent cats (one foster cat), and three chickens. As a result, the cute faces of our animals end up on my Instagram channel.

Sorry cat people, but I’m 90% a dog person, 100% animal lover. With this bias, I post photos of our dog (#adventuresofmork) more frequently and receive a decent number of engagements relative to my following.

Recently; however, I’ve started posting a few more pictures of one of our cats and received what seems like a significantly higher engagement response.

Out of curiosity, I formed a hypothesis that photos tagged #catsofinstagram received more engagements than #dogsofinstagram and including cats in my dog photos will help boost engagement.

For my methodology, I took a 25% sample from Brandwatch of #catsofinstagram, #dogsofinstagram, and – just for the fun of it – #chickensofinstagram posts that occurred in June and July 2016. Here’s what I found!

My first question is, is #dogsofinstagram is more popular than #catsofinstagram? 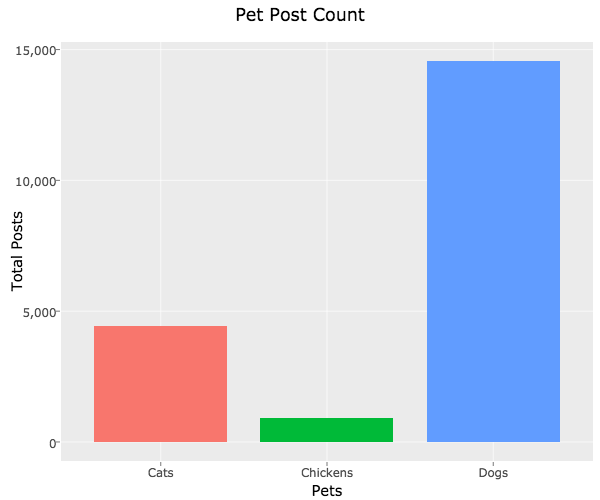 That’s a good start! #dogsofinstagram is a more frequently used hashtag than #catsofinstagram. Volume is only one piece of the story; however. The big question is how are those posts performing?

My initial observation was that my #catsofinstagram posts generated more engagements per post than #catsofinstagram. Is there any truth of this outside of my home/mini-farm/zoo? 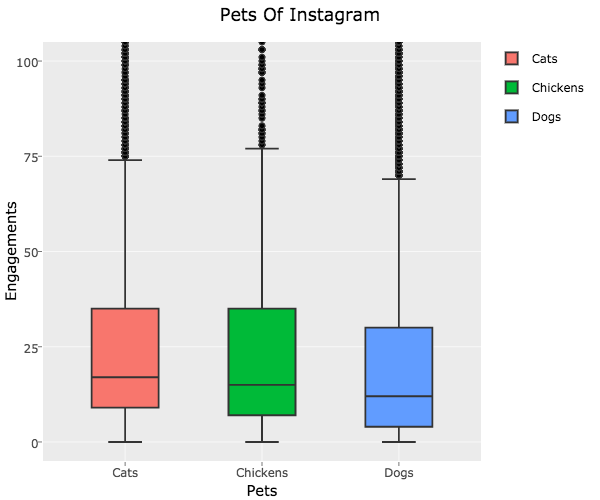 Yes. #catsofinstagram posts receive more engagements than #dogsofinstagram with a median of 17 versus 12. Even #chickensofinstagram outperform dogs!

In this sample of data, dogs do have a winner for engagement with an outlier post which received over 300K engagements.

#(Pet)ofinstagram isn’t the only hashtag I use when posting about my animals, a trend that other Instagram users follow as well. Let’s get technical. The 0 bin is a lie. Posts that have 0 hashtags don’t have any hashtags used in the post copy.

The hashtags are; however, in the comments (a best practice for brands). For users that don’t follow that approach, using only 1-3 hashtags is not as common as using 4-5, though 29+ hashtags are the most frequent. Distribution of the hashtag use data for all pets is bimodal, meaning there are two modes within the data set. This is explained by the previously mentioned 0 bin which includes posts with hashtags in the comments.

If we quantified the hashtags used within those comments, it is likely we would see a more left-skewed distribution.

Dogs follow the overall pet trend with a bimodal distribution.

#dogsofinstagram posts are more likely to have up to 30 hashtags, but for those who aren’t as hashtag crazy, posts will either include hashtags in the comments or between 4 and 10 total hashtags. 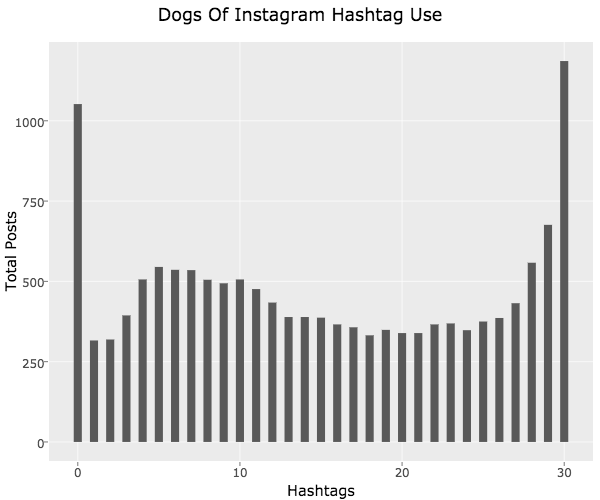 Cats follow the same bimodal trend for the most part, though are more left-skewed at -0.046. #catsofinstagram posts are much more likely to have 30 hashtags. 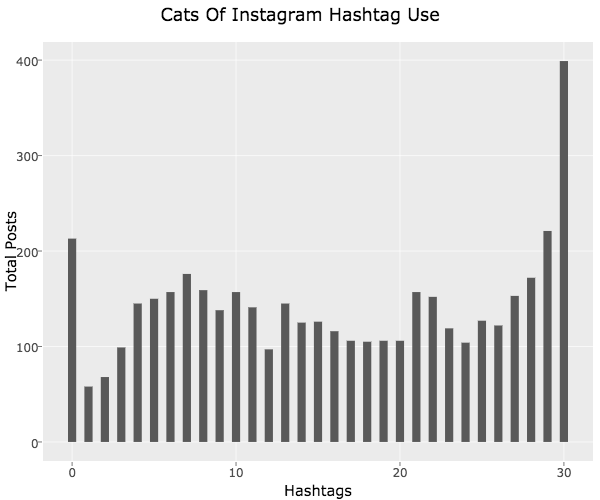 Chicken hashtag use is much less symmetrical with a heavy right skewness of 1.18. A skew of over 1 means that the distribution is highly asymmetrical. It’s less likely that a #chickensofinstagram post will include a large number of accompanying hashtags. There are two noticeable outliers, 0 hashtags (hashtags in comments) and 1 hashtag.

One hashtag posts receive a median of 19 engagements, yet 2 hashtags saw a median performance of 7. The correlation coefficient is 0.79, a strong positive, linear relationship suggesting the more hashtags included, the more engagements a post will receive.

Another thing to consider is the performance of multiple animal hashtags together.

Note: posts with 0 hashtags were removed from the following dataset. It appears as if there is some truth to my initial hypothesis. Photos that use both #dogsofinstagram and #catsofinstagram gives dogs a 2x engagement boost with a median performance of 14.

Adding chickens to a dog or cat photo; however, takes engagement down a notch despite lone chickens having the highest median engagement.

Curious about the combination of all three animals, I looked at the group of six posts that fit the bill. Of those posts, all were from the same account and none of them were about either animal.

Instead, all six posts were about honey. It seems as if this account was trying to game the system with irrelevant hashtags! I have another hypothesis that getting all three animals in one photo is next to impossible because of the resulting chaos.

If your dog(s) and cat(s) get along, post pictures of them together to get the most-optimized performance. When using additional hashtags with your pet photos, experiment with the number and see if you fit the trend of more hashtags = more engagements.