All the social data from an evening of firsts for The Oscars.

With 1.8 million mentions, the 94th Academy Awards was undoubtedly the most memorable ceremony there’s been in years.

From Will Smith’s altercation with Chris Rock sparking huge conversations online, to Ariana DeBose making history with a best supporting actress win, there’s plenty of data to dive into.

Read on to discover the biggest moments and names that surfaced across Twitter conversations during Oscars 2022.

Note on methodology: All the data mentioned here was gathered from 8PM EST to roughly 11:40 PM EST (the time frame of the Oscars 2022 event). All data comes from public Twitter mentions for each award category and associated nominees.

How Will Smith divided the internet

Let’s talk about *that* moment.

Undoubtedly the largest talking point at this year’s Oscars was Will Smith’s altercation with comedian Chris Rock. Smith went viral after he took to the stage and appeared to slap Rock for making a joke about his wife Jada Pinkett Smith and her alopecia.

The encounter caught the attention of the internet, especially after Will Smith went on to win his first Oscar as Best Actor in a Leading Role for his acting in King Richard. Of all the conversation around awards categories, the Best Actor category stole 44% of the mentions throughout the night with a peak of 17,133 in a single minute after the win. You can see the scale of the conversation sparked in the chart below. 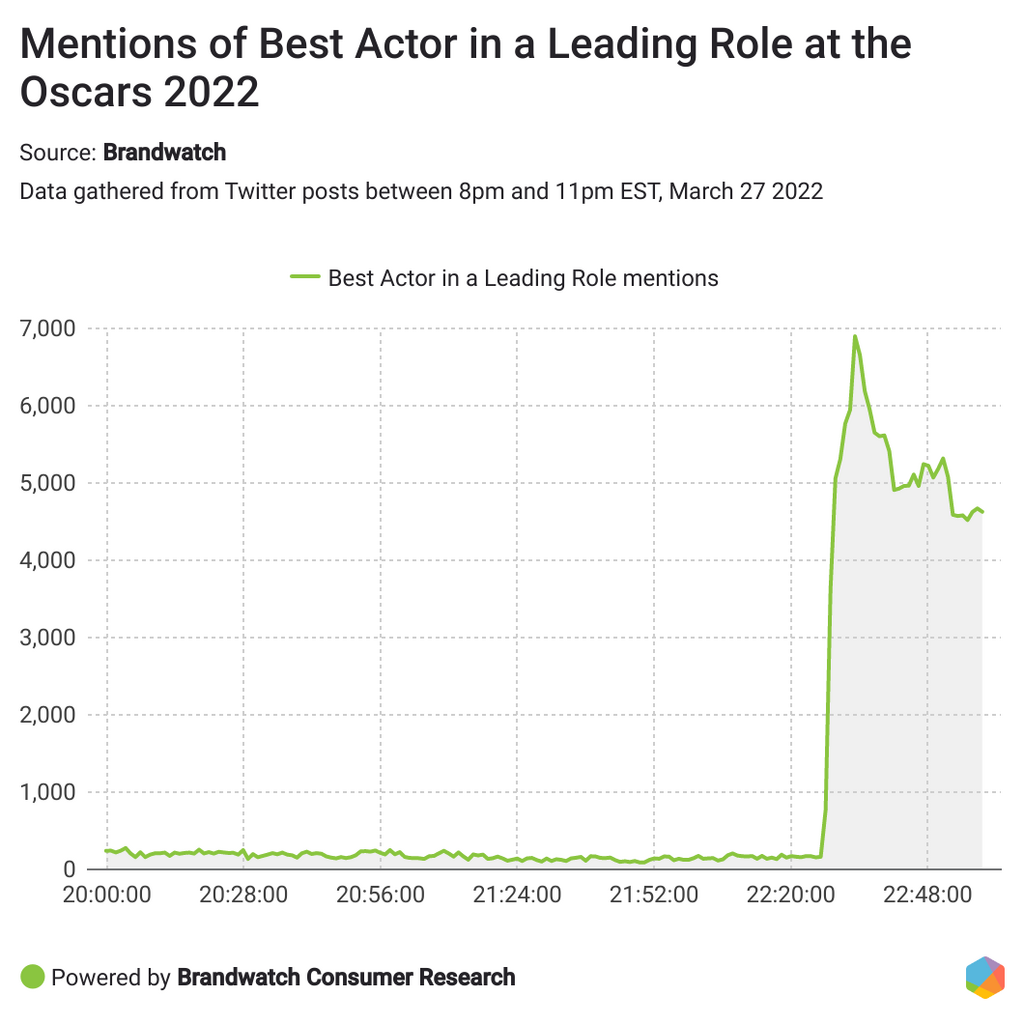 Looking at the conversation on a minute-by-minute basis, we can see how sentiment took a turn over the course of the broadcast and how divided the conversation became. In fact, 21% of emotion-categorized mentions around Will Smith were angry, with some calling for him to be escorted out of the event. Meanwhile, others were in support of Smith’s defence of Jada.

Will Smith winning the Best Actor award divided opinion even further on Twitter. Only 6% of conversations surrounding the category were positive – a very different vibe compared to other categories. 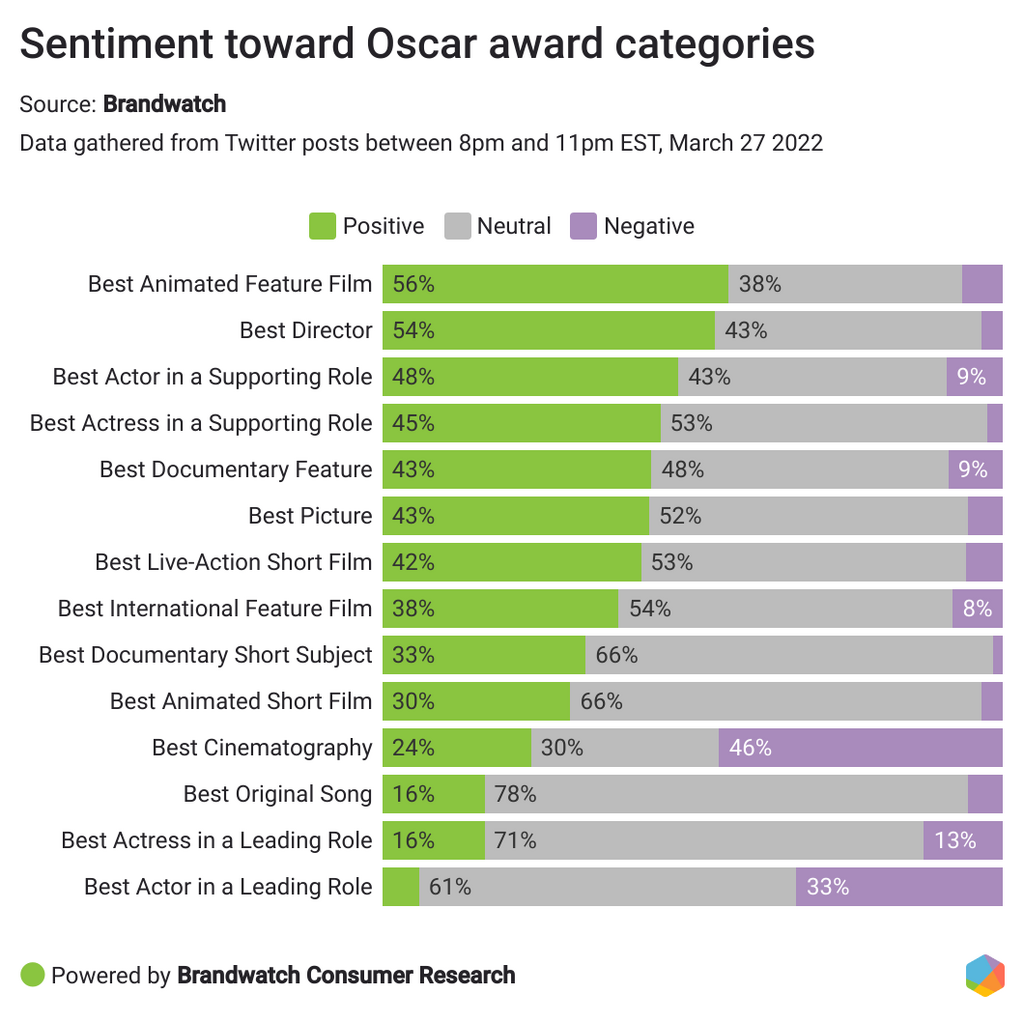 Promising news for the Oscars

Online talk surrounding the Oscars boomed during the 2022 ceremony compared to last year, with a notable 150% increase in mentions of the event on Twitter. Conversation was on par with the numbers pulled pre-pandemic, which is promising news for the film industry.

So, what prompted this increase in popularity? Will Smith controversy aside, there were a few key talking points throughout the Oscars this year…

A night of firsts

Fans are keen to support the progress of under-represented Oscar winners, and 2022 was a year of firsts for the Academy Awards.

Most notably, Ariana DeBose made history as the first queer woman of color to win an Oscar. DeBose won the prize for her part in the recent West Side Story remake as Best Actress in a Supporting Role. Online conversation saw an incredibly positive response to DeBose’s win, with 96% of the conversation showing joy towards the achievement.

HISTORY IS MADE. 👏 Ariana DeBose becomes the first openly queer woman to win at the #Oscars pic.twitter.com/0nr0fWmvdk

Additionally, Troy Kotsur went on to win the Oscar for Best Actor in a Supporting Role for his performance in CODA. As the first deaf actor to win an Oscar since 1987, fans took to Twitter to show support for his win. This award category got the third-highest percentage of positive tweets throughout the evening.

The most positively discussed category (compared to negative and neutral mentions) was Best Animated Feature Film, won by Encanto. This was followed closely in the positivity rankings by the Best Director category, won by Jane Campion for The Power of the Dog. Both of these categories fit well into this year of achievements for underrepresented groups, with one of Encanto’s producers, Yvett Merino, making history as the first Latina to win an Oscar for an animated feature. Equally, Jane Campion’s win made her the third female winner of the best director award.

For events like the Oscars, Twitter’s superpower truly shines through. The Academy Awards used Twitter to their advantage this year with their Oscar Fan Favorite category. This brand new category allowed fans to take to Twitter to show support for their favorite film, in an effort made by the Oscars to “build an engaged and excited digital audience.”

Army of the Dead’s win can largely be attributed to director Zack Snyder’s efforts towards rallying fans together to vote for the film. The fanbase exploded on Twitter after the win, expressing their support. This simply goes to show the impact a loyal fanbase can have on today’s media space.

Holy WOW! #ArmyoftheDead #Oscar #FanFavorite Next year they need an Oscar for THE BEST FANS!!!!! Just when I thought it couldn't be any cooler to be in a Zack Snyder film...
Thank you !!!
- Love Soccer Mom pic.twitter.com/xqSLGyyujn

It would be easy to ignore all the positives that contributed to the massive conversation around the Oscars 2022 and instead focus on the drama. But buzzy engagement with the Fan Favorite award, and viewers joyfully celebrating seeing talented actors from underrepresented backgrounds succeed, will hopefully be the things that keep people coming back to share positivity around the awards ceremony for years to come. While the conversation around the Oscars was declining in previous years, that trend could now be turning around for the better.