If you’re a fan of soccer, brands, or social media you’ve been inundated online the past 24 hours.

Uruguay’s World Cup forward Luis Suarez apparently bit another player before they defeated the Italian team during their final group game on Tuesday.

This is his third biting offense. Good luck with those disciplinary hearings FIFA.

In an unsurprising turn of events, the marketing and social media teams for major global brands (and local, unheard of ones too like BarkCare) exclaimed with glee as they tripped over themselves to unleash a barrage of memes, gifs, and viral Twitter replies commenting on the incident.

What ensued were dozens of news articles on the brand newsjacking stories, and a whole lotta tweets.

Including this Spanish-language tweet from McDonald’s Uruguay which garnered 68,503 Retweets (or about 3% of Uruguay’s population) according to our friends at Spredfast.

Other noteworthy “Superbowl Oreo” moments include: 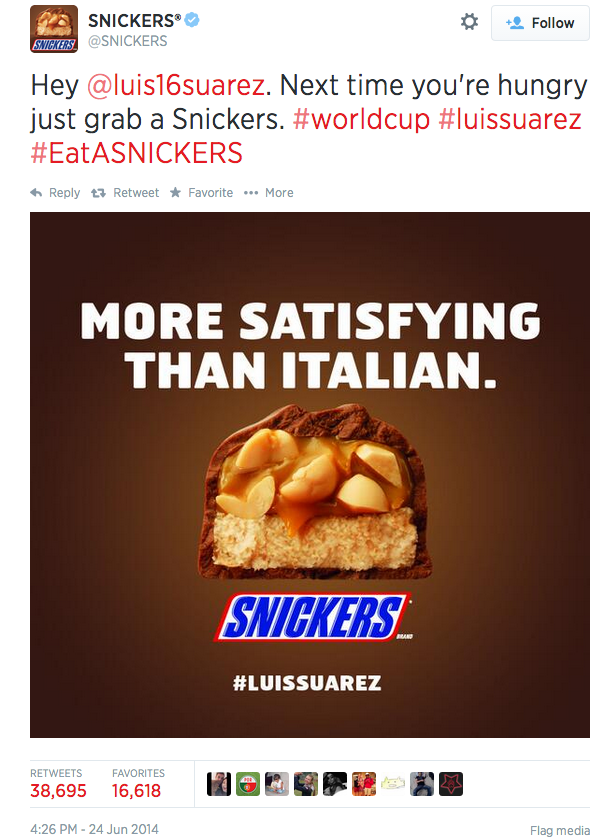 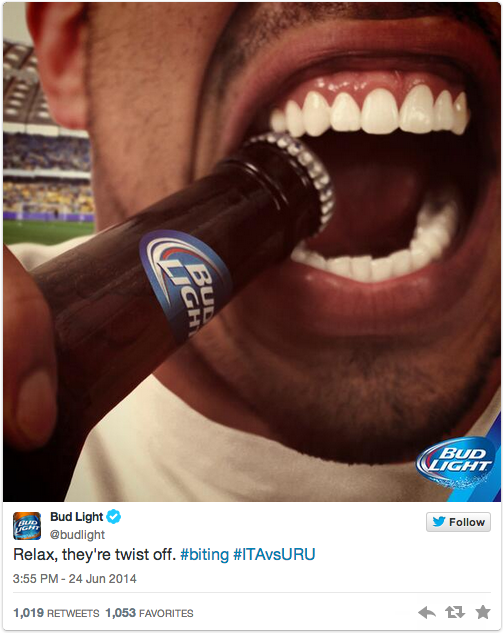 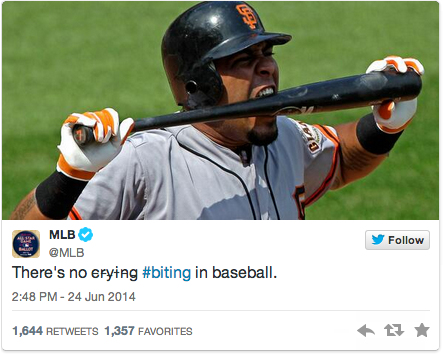 In a separate query looking at global mentions of Suarez and bite (that may or may not include any mentions of the World Cup) there are over 262,000 Tweets.

In addition to the RTs and favorites you can see on each brand’s meme or reply to Suarez on Twitter, here is a data breakdown on volume of mentions, looking at data from June 23-today in our World Cup related data:

Mentions in the Suarez and “bite” query data (looking at the same time period):

Doesn’t seem like much, but once you factor in the retweets and favorites (remember McDonald’s RTs are pushing 69,000 right now), it adds up to a whole lot of impressions. 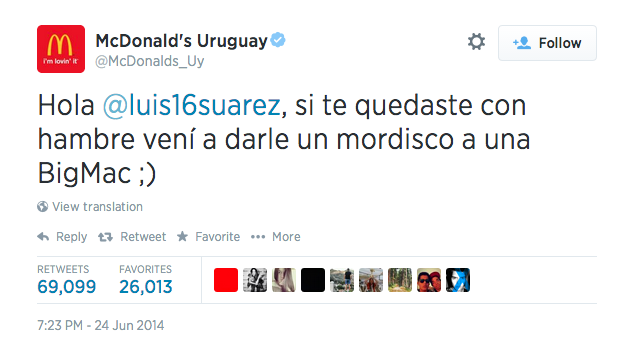 Not to mention the added attention of news articles covering the brand festival of social commenting on AdWeek, Digiday, The Independent, and every other news outlet.

Another intriguing piece of the data puzzle: the majority of tweets related to the Suarez biting incident are defined by the Brandwatch Analytics technology as having “neutral” or even “positive” sentiment.

How can that be? Biting another human being is frowned upon and sure to be a “negative” – right?

It’s much more complicated than that quick sentiment designation, since a majority of the impressions have been generated from retweets of brands posting neutral content, offering Suarez an alternate food/biting option (Snickers, Whataburger, Whole Foods, Nando’s, etc).

The majority of memes, gifs, and tweets about the now infamous Suarez bite heavily lean on the side of the humorous and snarky. This accounts for the neutral/positive sentiment of our data.

It really gives new meaning to the phrase that there’s no such thing as bad publicity.

Stay in the know on World Cup social data as we enter the second half of the tournament, by visiting our data visualization for new insights and our real-time numbers.