The Secrets of Developing a Cult Following

Wawa was voted America’s Favorite Sandwich. Given the other, bigger players in the space — like Panera, Subway and Arby’s — it may seem odd that a regional gas station and convenience store chain took home the top spot. But that’s before you realize that Wawa has something that those national brands don’t: a loyal, local cult following.

Despite its relatively small footprint and regional focus, Wawa has garnered a passionate following for its fan-favorite sandwiches, robust coffee options, and friendly atmosphere. In fact, the store’s loyal following has been dubbed “The Cult of Wawa.”

All this raises an important question: How is a cult-brand made? We analyzed consumer insights to better understand how certain brands develop fiercely loyal customers, and what Wawa’s success story can teach brands about the power of a cult following.

Specifically, we will dive deep into the three main aspects of creating a cult following revealed by our recent analysis:

Home is where the brand is

Wawa is not the only food brand with a cult following. Far from it. Across the country, dozens of brands have parlayed a loyal local fan base into a national reputation. We wanted to see if we could find a pattern in consumer conversations that would help us better understand the secrets of cult success.

Me in Pennsylvania: pa sucks

Me anywhere else: I was baptized in independence hall by Carson Wentz. My favorite holiday is wawa hoagie fest and my first word was jawn. I performed dreams and nightmares for the 8th grade talent show and eat cheesesteaks every night for dinner

Person: I need groceries.
Rochester Person: Groceries 🤔🤣you do NOT 🙅🏽‍♂️‼️know groceries 🍞🌽til you been ✈️🚶🏽to Wegmans 😋🙌🏽on God 😤Danny 5:85

Did I choose my hotel for the next two weeks based on the fact that it's next to an In-N-Out Burger? Yes. Definitely yes.

Each of these brands is known for its dominance and high consumer sentiment scores within a particular geographic region. Even if they have expanded globally (like Dunkin’), they remain inextricably linked to a specific locale. This reflects our first insight about cult followings: Regionally specific brands are better able to inculcate loyalty among a dedicated (and geographically focused) customer base.

Online conversations can help us see this effect more clearly. The maps below show posts per capita about the aforementioned brands, revealing that each brand is discussed most heavily in the state and region where they started. 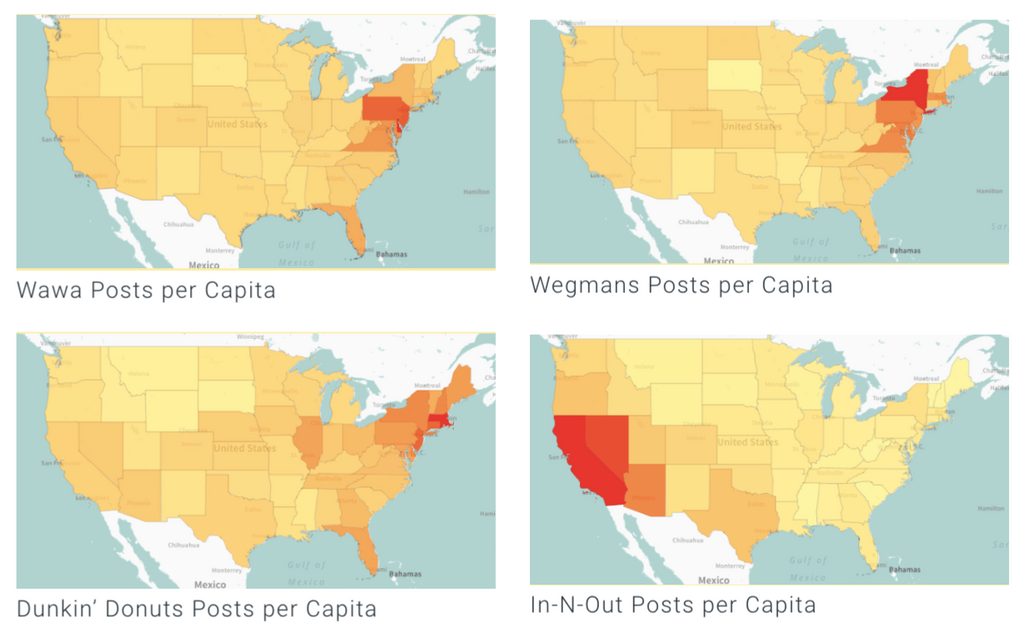 The fact that hometowns post about their local options more than the rest of the country isn’t surprising, but it is surprising to see just how dominant this trend is. Like local sports teams, regional brands elicit strong responses from their local fans. Far from hurting the brand’s perception, this local focus helps the brands build and maintain a strong following.

When comparing the national sentiment of the brand to the #1 city discussing the brand, we can see the hometown support for the brand and how it imbues the company with a central locus of support.

The revelation that regional brands have regional followings is only the first step in understanding how some brands create cult-like followings.

Indeed, the flip side is equally important: The best cult-brands elicit loyalty not just among their local customer base, but are actually able to have that positive perception seep into the larger, national conversation. Geographic scarcity, in other words, is as, or more, important to cult-brands than local dominance, as it creates desire for the brand to enter new markets.

We see the Wawa conversation trend in the United States, outside the brand’s home of influence shows how well the brand’s stellar reputation percolates from local cult following to nationally loved.

As Wawa grew, so did word of mouth marketing. Conversation in a sample of states outside the Mid-Atlantic region grew from under 100 monthly posts in 2010 to an average of 2,500 posts in 2018. 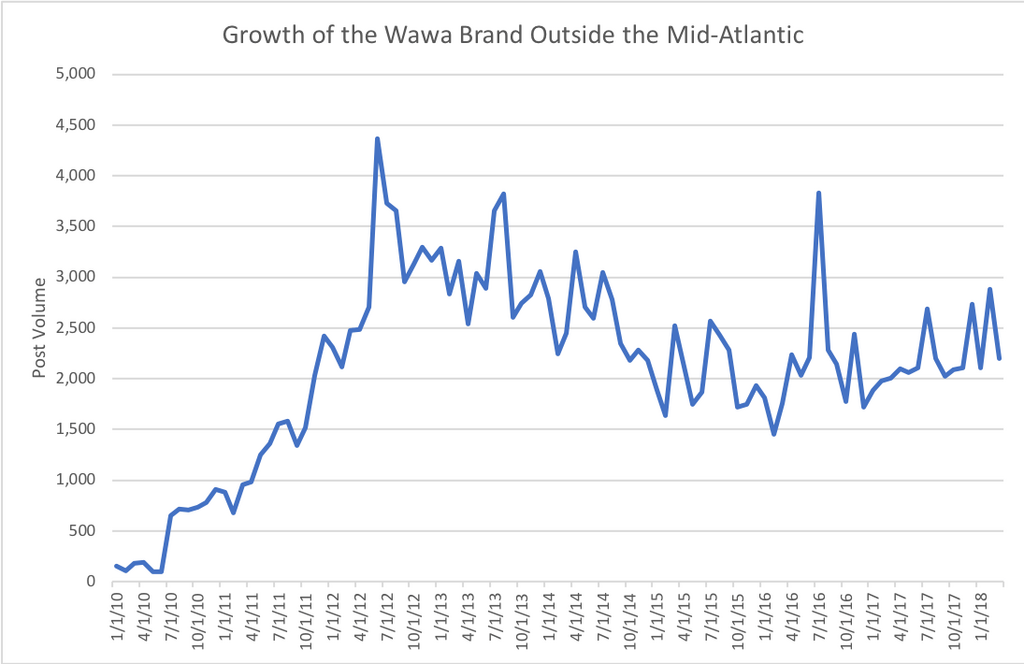 Knowing that there is desire for the brand’s growth shows that word gets out and the brand’s reputation builds, retaining that cult loyalty but expanding the brand’s area of influence.

It’s not just about regionality and scarcity. The cult-brands we analyzed offer something that differentiates themselves from their competitors, beyond just their localized footprint. Wawa offers sandwiches that are higher quality than other convenience stores; In-N-Out has their famous shakes; Wegmans has been applauded for their chef-quality prepared foods; and New Englanders love Dunkin’ iced coffee and crullers.

Looking at a positive sentiment word cloud, we can see these things being mentioned: such as Wegmans with “sushi” and Wawa with “hoagies.”

In the end, to build a brand with extreme consumer loyalty, the single most important aspect is that sense of home when you’re inside the store. The more you align yourself with the brand’s hometown, the more that region will love and discuss you. Pennsylvanians feel the most at home in Wawa and Upstate New Yorkers feel at home in Wegmans. So no matter how big you grow, a brand should always keep focus on where it all began if they want to reap the benefits.