Last week we released our Social Listening Retail Report. We took a look at how the US and UK retailers compare, how effective brands distributed ...

The more eagle-eyed of you may have seen that last week we published our Social Listening Retail Report.

We took a look at how the US and UK compare, how effective brands distributed customer service on Twitter and some unique ways in which retailers implement social in their business. If you haven’t given it a read already, you can go download it here.

We packed the report full of social shopping, hashtag campaigns, customer service and more, but couldn’t fit in everything we wanted to. So this blog will take a look at some of the stuff we would have loved to have included but couldn’t – which of the UK retailers are champions on Twitter?

We collected data on 29 top performing retailers within the UK.

Each were managing remarkably well run accounts, catalyzing a host of conversation on Twitter. In fact, these 29 accounts generated 45,947 retweets and 30,236 replies in just seven days.

They post 65 new tweets per day of which 57 are @replies, meaning that brands post eight timeline tweets per day. These are retweeeted, on average, 226 times a day.

Audiences reply to UK retailer’s posts 226 times a day. However, brands only respond to a mere 57 of these per day. This means over 74.78% of consumers comments are left unanswered. A huge number.

We analyzed how tweets performed at different times of the day. It revealed how brands are not communicating when their audience want them to. 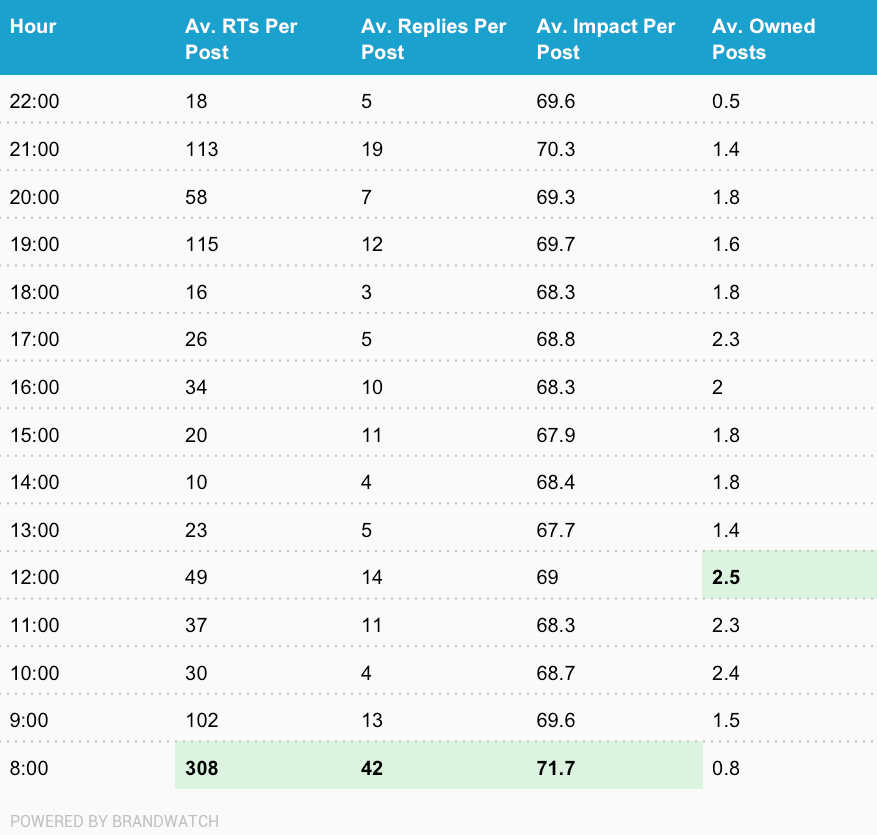 Brands publish the majority of their tweets between 10am – 12am, yet their audience engage and interact with tweets posted at 8am.

For brands to truly optimize their presence online, they should start to schedule early morning posts or bring their community managers in an hour earlier.

We next analyzed whether different days of the week generated different amounts of engagement.

The aim was to see if brands were capitalizing on high performance days, but surprisingly, they weren’t. 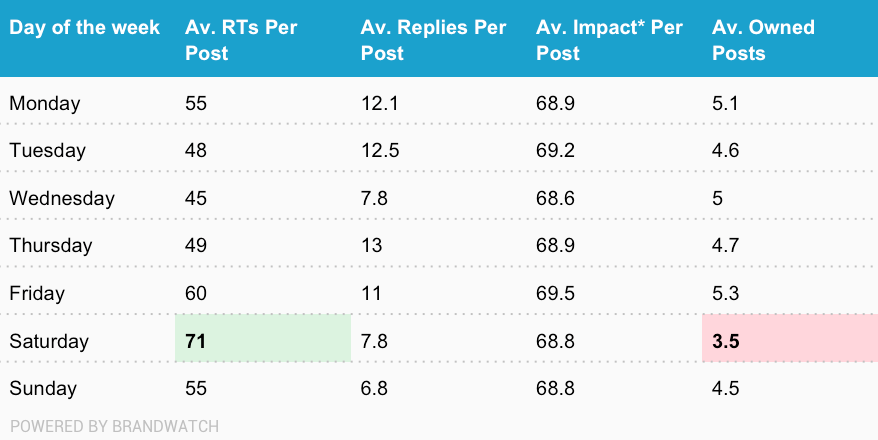 Here, we see Saturday provides retailers with – on average – an additional 17 retweets per post, yet retailers post the fewest amount of tweets on that day, averaging just 3.5 tweets.

Retailers need to adjust their social strategy to accommodate this clear shortfall.

The supermarket sector is clearly underperforming when compared to the rest of the retailing industry.

They are generating fewer RTs, replies, and new Twitter followers despite tweeting more times per day. 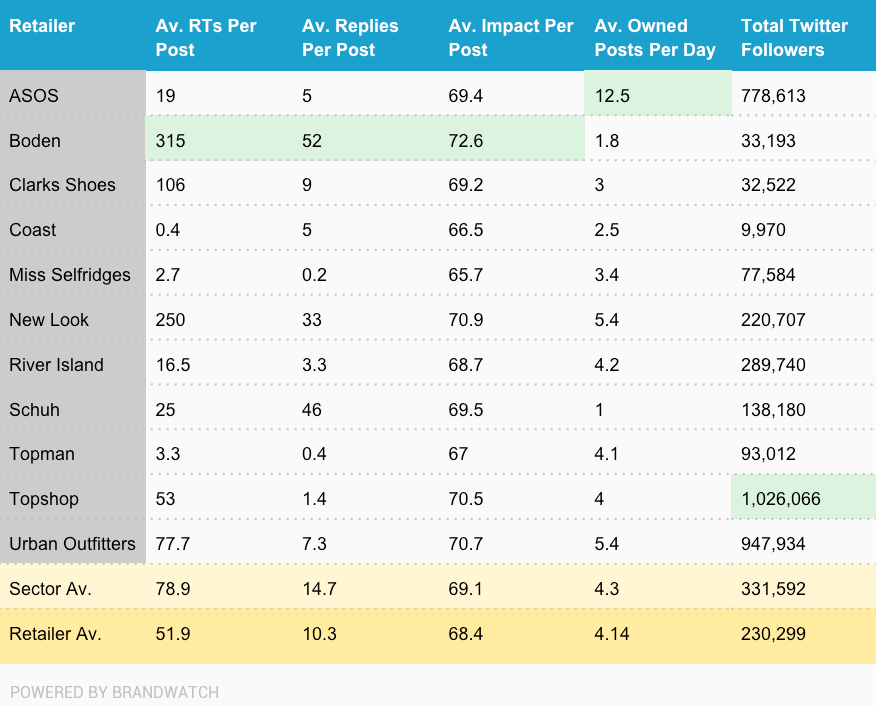 Boden is leading the industry with their social strategy on Twitter.

Their posts perform 286% better than the competitors in their sector despite posting 2.5 times less per day.

Adding to that, Boden only have a small Twitter following, just 33,193. To generate such a large response from a small audience, whilst against the industry’s leading competitors is undeniably phenomenal. 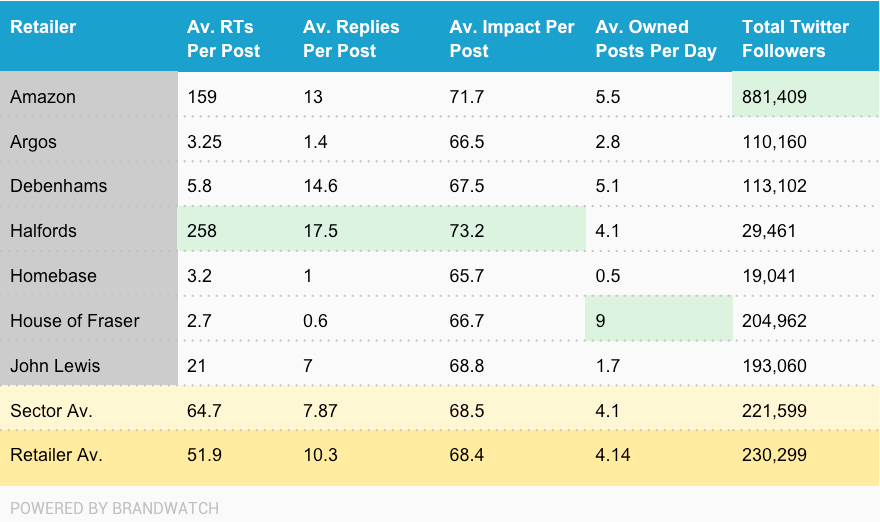 In similar vein to Boden, Halfords are leading the way in their crowded sector with tweets performing 242% better than the sector average even though they have the second lowest amount of Twitter followers.

Many of their tweets contain simply competitions that allow followers to win Halfords products. Consumers love it – the below tweet generated 472,726 impressions in only six days.

Winter taking the shine off your car? Give it an @autoglym polish. Just RT & Follow to win! #competition pic.twitter.com/C0YynZxq09 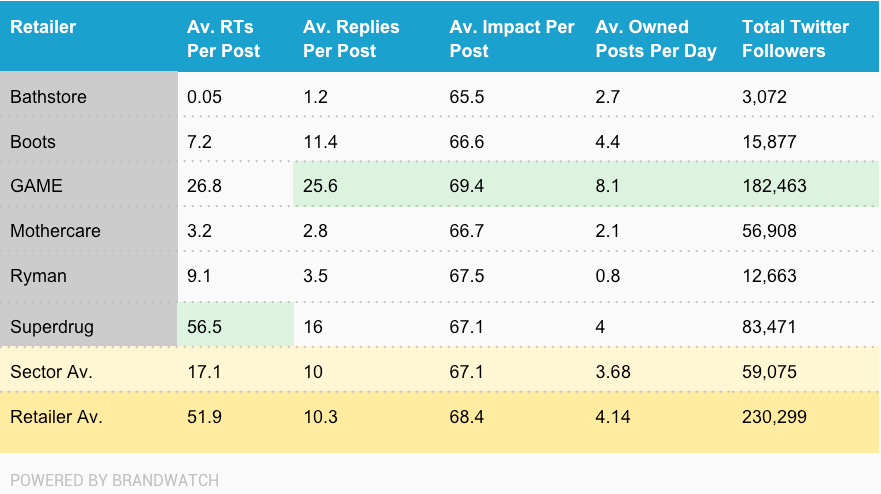 We then normalize both both of these factors, creating a metric between 1-100 which becomes the Impact score.

Here’s how the 29 retailers rank up:

All of the data presented in this article was collected by Brandwatch Analytics – a world leading social listening tool.

If you think your brand should start collecting data like this, get in touch with us and we’ll set you up with a free demo.

Interested in the retail industries social presence in both the UK and the USA? If so, take a look at our latest report, Social Listening for the Retail Industry.