There are many people out there, at times, lacking the motivation to get off the couch, put on their running shoes and work more than just their hand-to-TV-remote coordination. These days the shake weight isn’t going to cut it.

It’s no surprise that Nike  has once again launched a campaign that encourages even the least motivated couch potato. The Nike FuelBand came out in the new year and has been tweeted, photographed and certainly sweat on since its debut.

What Nike has been smart about is jumping onto the “social media bandwagon” early on. Adapting like other big brands to embrace the new forms of marketing and social media- that often times involves letting the customer have the platform to promote. 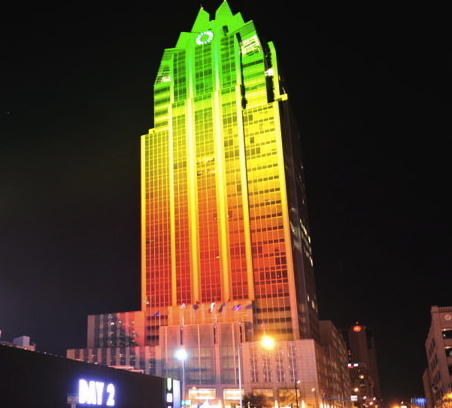 Nike held a concert in downtown Austin during South By South West displaying the same color layout as the FuelBand onto a building for all festivalgoers to see.  The company placed FuelBands on a large number of concert attendees tracking the activity, using customized wireless technology that functions similar to the way the iOS app works. The more energetic the crowd got throughout the concert the greener the building became.

The organization rolled this operation out with their eyes fixed on consumer engagement that was only enhanced more by word-of-mouth  promotion.

They continued their global #MakeItCount hashtag in Mexico, encouraging people to sweat it out to earn Nike products.  Consumers were asked to clock the kilometers they were running with Nike+ and the FuelBand using the distance you acrued to bid on Nike products. The incentive here was to not only buy the new FuelBand but into brand equity. Consumers were eager to not only participate because it was challenging but also because it was an interactive platform on a more personal level.

Whether it’s teaming up with Facebook to premiere the latest product or coining their own slogans and hash-tags. Nikes latest ventures have paid off in ROI, and sweat. The company’s long standing global reach still feels personable and inspirational. Offering their product platform for user advocates, as well as creating brand and product loyalty. And isn’t that what makes it count?