Founded in Paris in 1926, Publicis Groupe is the second largest communication group in the world, according to the latest RECMA report. Leo Burnett, Saatchi & Saatchi, Digitas and Starcom are among the French group’s 1,349 agencies.

Publicis Groupe is renowned for its diversity, innovation creativity.

Since 2009, Publicis Groupe have created and launched a New Year’s greeting campaign. The message – featuring the group’s President, Maurice Lévy – is intended primarily for the group’s 77,000 staff members, and has quickly become a tradition that the whole communication industry looks forward to.

Every year, the Publicis Groupe chooses one of its agencies to create, direct and release this unique campaign. For the 2016 campaign the agency Marcel were awarded this privilege.

Chosen by both Instagram and Uber for its first French communication campaigns, Marcel is the creative brain behind some of the most memorable French campaigns from the last few years.

At the end of September 2015, the agency was briefed by Publicis Groupe’s communication directors, and the idea of “The Skippable Wishes” was born. The campaign’s concept mixed traditional and innovative consumer advertising culture.

“As a channel, social media plays a decisive role in terms of influence. It is also an inexhaustible source of observation and creative inspiration of our time and people’s lives.” – Pascal Nessim, co-president at Marcel

In the 2016 “Skippable Wishes” campaign, Publicis Groupe’s President Maurice Lévy is shown in a series of sketches made to look like stereotypical television commercials.

Analysis of an international success

The group’s annual campaign usually generates a lot of buzz across social media. For the Publicis Groupe, it was vital to be able to quantify the reach of the campaign and also to get an specific understanding of which elements of the campaign had resonated most with its audience.

“We wanted to know the public’s reaction, but also see how they interact with the campaign. Being able to quantify our social media efforts in order to evaluate the success or the failure of a corporate campaign helps us to adjust our strategy and future campaigns.” – Lindsay McCallum, Global Communication Manager at Publicis Groupe

The team used Brandwatch Analytics to perform a detailed analysis of the impressive results achieved by “The Skippable Wishes” campaign.

The campaign was officially launched on December 16th 2015. The previous day, a group of carefully selected guests were invited to an exclusive preview of the video campaign at the group’s HQ in France.

Within two days, the campaign earned over 32 million impressions on Twitter. It was also discussed by many influencers and prestigious international publications such as The Guardian and Le Point.

Within five days of the launch, the campaign obtained over 4,500 mentions across five continents, with an impressive 100% positive sentiment towards the campaign.

Analysis of the conversations around the campaign revealed four key themes. Using Brandwatch Analytics to look closer at each of the themes, the group’s communication team was able to identify that relying on comedy and humour had been critical in the campaign’s success and virality. 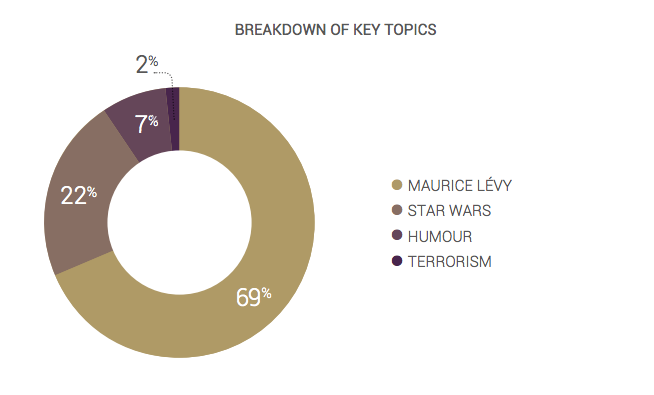 With this campaign, the Publicis Groupe and Marcel confirmed their status as a leader in creativity. A true accomplishment for one of the biggest communication groups in the world and in a market where competition is fierce.

To understand how Publicis Groupe used Brandwatch Analytics to perform a detailed analysis of the campaign’s success, and used this data to drive insights for its future corporate campaigns, download the case study in full.

GET THE CASE STUDY