You know the deal. A full three months before Santa flies that big red sleigh of his, retailers hope to boost profits by creating a sense of Christmas merriment at their stores (and the cash that comes with it).

After all, this shopping season accounts for roughly 20% of their annual retail activity.

Yet again, retailers are setting a new standard for that phenomenon called premature Christmas advertising.

The bikini season is still fresh in our memory, and yet you can already go Christmas shopping in the US and the UK, with major chains like Sainsbury’s, Harrods, Costco, West Elm and Hobby Lobby stocking up on chocolate santas and artificial trees.

What happened to Halloween and Thanksgiving?

Don’t get us wrong, we’re all for the festive Ho-Ho-Ho, but with more than 3 months until Santa flies through your chimney, isn’t September a bit too soon?

Curious as ever, we wanted to know the answer and decided to dig in. We scanned through a sample of 100,000 social mentions in August to see if people have spotted Christmas at their local stores or elsewhere.

Three brand names popped up among the most popular topics about Christmas shopping: Kmart, Walmart and Toys R Us. 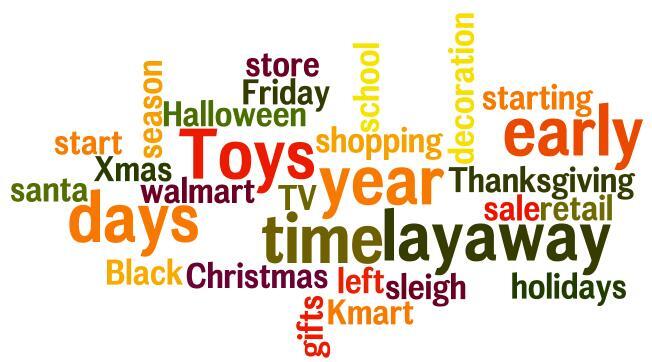 Surprised? You shouldn’t be. The Christmas season got an early kickoff when Kmart aired its first holiday commercial on September the 9th, featuring a gingerbread man promoting the store’s layaway program. The social response was massive.

But volume isn’t everything. What about the sentiment of all that conversation?

Although some industry experts say this marketing strategy may be a smart move for Kmart, social media fans clearly didn’t agree. Kmart’s Facebook page was brimming with complaints almost instantly.

Online buzz about Kmart’s TV ad was far more negative than positive, with 21% responding with outrage and only 4% with excitement.

Not to be outdone, Toys R Us and Walmart are also reviving the layaway program, starting as of this month. As they expect competition in the holiday season to be tough, these retail giants also publicised lists of their hot holiday toys last week.

Luckily for them, most people were rather excited with their holiday initiatives, such as a cash back, price match and an extended holiday return deadline.

Some customers said starting early helps you saving on holiday shopping. It will allow you to avoid the stress of buying gifts during the Christmas season rush and having to make all your expenditure at once. Others do a double-take when they spy the seasonal aisles.

If you can’t get enough of the Kmart commercial and need some more holiday based fun, then be sure to check out our blog or tweet us your opinion to @Brandwatch.  We’d love to know your thoughts on #EarlyChristmas shopping.