Natalie Meehan loves using emojis. But recently a new problem associated with them has emerged. Here she explains why context is so important.

As an advocate for using emoji at every given opportunity, I am often sprinkling my written communications with smiley faces, grimaces and hands raised to the sky.

However, the emoji has come under scrutiny recently during the case of English footballer Adam Johnson.

During his trial for two counts of sexual activity with a minor, it was revealed that he sent the emoji of the monkey covering its eyes in response to being told that a girl he was messaging was only 15.

Judge Rose reminds jury that Johnson said his use of ? emoji after finding out when she was 16 was “just a funny picture”.

Johnson argued that the emoji didn’t in fact mean that he was choosing to ‘not see’ that she was underage, but that he was immature and it was ‘just a funny picture’.

As part of a study, The New Statesman asked 25 people what they thought the emoji meant. Only 5% used it in the way Johnson referred to. So, was he lying? The jury eventually found him guilty of two counts of sexual activity and one of grooming.

The emoji debate probably didn’t sway anyone. But it’s an interesting development cropping up more regularly now that emojis are transforming the way we communicate. How did we get here?

The birth of the emoji

The invention of the emoji in 1999 answered a very specific challenge. Shigetaka Kurita was working at NTT DoCoMo, the firm that produced the prototype emoji, at the end of the 20th century.

The firm launched the first mobile internet platform, called ‘i-mode’. The aim was to get internet onto cellphones, and the cellphones they were working with had very small screens; only big enough to fit 48 characters.

Trying to communicate in such a small space led Kurita to explore the idea of using images, instead of text.

“Prior to our i-mode, AT&T was already offering information services for cell phone users. Everything was shown by text. Even the weather forecast was displayed as ‘fine’. When I saw it, I found  it difficult to understand..I’d rather see a picture of the sun, instead of a text saying ‘fine’.”

The company was also selling pagers (remember them?) and using hearts in the messages was popular among users.

“I started thinking that having pictures that can show expressions like hearts would be important too. I passionately proposed to add emoji to i-mode. My proposal was accepted quite easily since there weren’t many planners back then.”

Japan never looked back. A few years later, the rest of the world woke up.

The linguistic innovation – and yes, I would argue that the emoji is that important, that significant – has been riding the stratospheric wave of cultural appeal for a couple of years.

The Oxford Dictionary even named ? (Face With Tears of Joy) as the 2015 Word of the year. Emojis have moved mainstream. They are not, as some have argued, a backward step in human communication, but an advancement.

Spoken language is no longer enough to demonstrate all that we have to say.

And they’re still evolving as they enter the daily lexicon of more and more people. Caspar Grathwohl, president of Oxford Dictionaries, defended the choice of ? being awarded Word of the Year;

“They are so flexible. They can mean different things to different people. So I send, I don’t know, an aubergine to one person and it might mean something very different to another person…They are starting to tell stories in and of themselves.

The fact that we are using emoji in combination to express more complex ideas and experiences is one of the most fun and playful parts of the whole script. Will emoji eventually be tamed and come to look something more like traditional language scripts that we understand?”

And here we find a new problem. That of context.

With more people adopting emoji as a regular form of expression, there are considerably more opportunities for what the likes of Buzzfeed term ’emoji fail’.

You’ll have seen the countless listicles telling cautionary tales of the wrong emoji being used at the wrong time, or an accidental eggplant.

As a brief aside, my particular favourite brand of emoji fail is the ‘momoji’ – when mothers attempt to talk ‘moji.

The issue is twofold; firstly, some emojis appear differently on different platforms.

Below you can see an example mentalfloss.com created as a handy guide to help navigate through the potentially relationship-damaging waters. 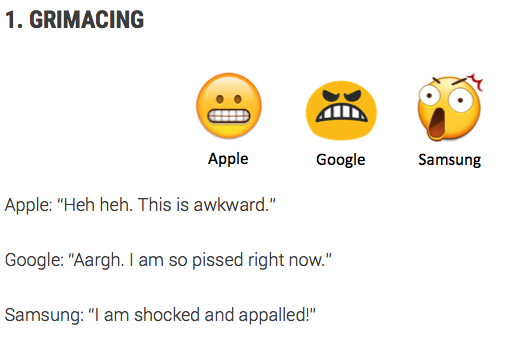 The other issue is that different emojis can mean different things to different people.

Let us consider the eggplant/aubergine. Pre-2011, the eggplant was a vegetable. Now, as Regan Hoffman writes, “There’s only one thing Solanum melongena is known for online: dick.”

The eggplant emoji in the wrong hands can be devastating.

One example of how emojis can represent different things in wildly different ways is in our marketing team here at Brandwatch.

Last year we started using Slack in the office as one of our primary communications tools. As you may be aware, emojis and ‘Slack Reactions’ are a massive part of what makes the platform so engaging and, dare I say it, fun.

In our Marketing and Design channel we began to use emojis as a way of congratulating each other when things went well, and the eggplant started cropping up.

But Will McInnes, CMO, decided that the eggplant was too phallic on its own, and it needed an accompaniment.

“I thought the eggplant was brilliant for its irrepressible sense of upward vim and vigor but clearly too much like a you-know-what on its own.

So I needed to kind of cancel it out – I started thinking “what’s the emoji that’s least like a dick?” And it came to me. Agriculture! Tractors! Steady, reliable, nothing dodgy about them. Together they are my ying and yang. So ‘tractor eggplant’ was born.” 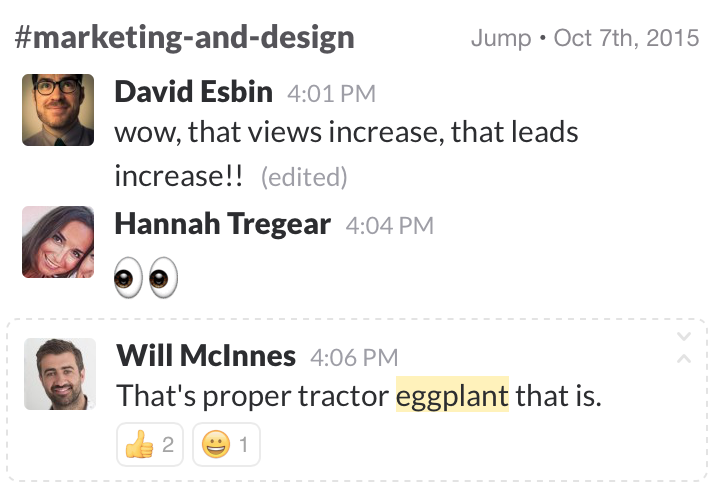 To anyone outside the team, that’s not going to make any sense.

But to us, it means a lot. To us, the symbol of the little yellow tractor alongside the eggplant means that our boss is recognizing that we are doing well.

The future of emojis and context

So what happens next? Will we see an official Oxford Emoji Dictionary in the near future? Will courtrooms call upon it as an official stance when it comes to cases such as Adam Johnson’s?

The future of language and communications is hard to predict. But I predict that emojis will soon be absorbed into written communications, and that those turning their noses up at the little symbols might need to wake up.

After all, emojis are pretty tractor eggplant.