To the Moon and Back: Cryptocurrencies in APAC

Unearthing trends in the financial technology sector in the APAC region.

The last five years have been a whirlwind ride for cryptocurrencies and their underlying technology: blockchain. Blockchain has gone from being a relatively unknown technology to the engine driving the latest and greatest way to spend, save and invest. Thanks to cryptocurrencies, financial services consumers all over the world can now get untethered from their home currency and reap the benefits of a digital universal currency.

Bitcoin, the first ever cryptocurrency, has become a household name globally, but there are numerous other lesser known currencies at play, such as Litecoin, Ethereum and Monero. With the advent of any new technology comes waves of doubt and uncertainty – and crypto is no exception.

In Asia-Pacific, the cryptocurrency topic has been steadily popping up in the online conversation for a number of years, but at a fairly low level, confined to more technical discussions. As might be expected, the discussion volume skyrocketed in 2017 along with the rising popularity of blockchain and crypto (and the latter’s value). Part of the crypto boom was no doubt driven by hype, which was also responsible for galvanising investors and helping to keep the prices high. Until the crash started.

Let it come down

Late 2017 was a great time for cryptocurrencies, with value and resulting consumer interest at an all-time high. The below chart shows how discussions among Asia-Pacific consumers reflect this global trend.  From the high point, discussion volume declined fairly quickly during the majority of 2018, but still remained significantly higher than before the boom period. 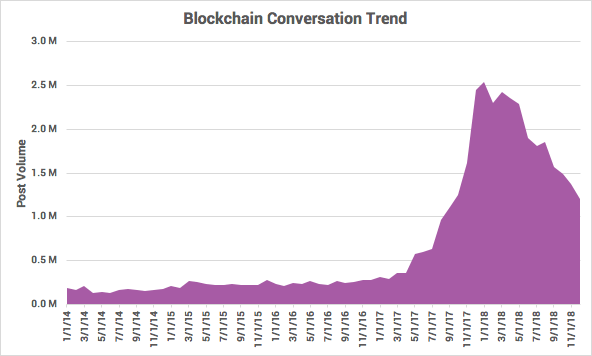 This suggests the initial hysteria phase has passed, but that consumer interest remains among more committed crypto enthusiasts. In a nutshell, consumer discussion levels around crypto tend to mirror long-term overall price shifts. Bitcoin is the market leader and, generally speaking, value of the other coins rises and falls on the value of Bitcoin.

With such a volatile currency, one might expect to find volatile emotions to match, especially among consumers who might have made large profits or even larger losses, based on their investments in cryptocurrencies. Surprisingly, the sentiment chart below shows a relatively consistent result over time, which even weathers the turbulent year of 2018 without huge increases in negative sentiment. 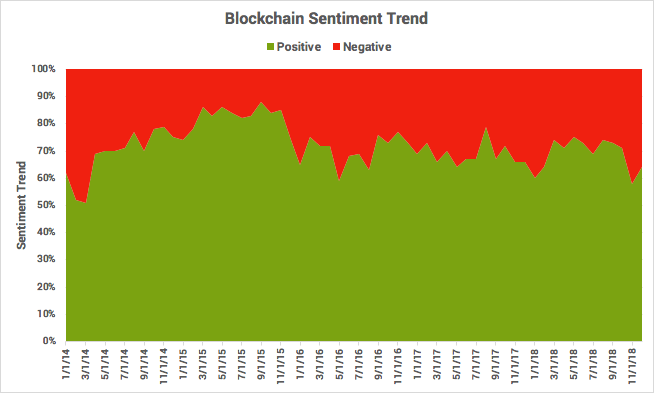 It’s likely that many consumers who are interested in cryptocurrency and blockchain see the technologies as opportunities, but at the same time maintain a level of realism that this is not a get rich quick scheme. Nevertheless, there are also many sceptics who still hold reservations about the usefulness of crypto, and the discussion will include their opinions as well, which could contribute to the negative sentiment.

For many consumers, cryptocurrencies are synonymous with just one coin:  bitcoin. First released in early 2009, by its mysterious creator Satoshi Nakamoto, the coin has gone from strength to strength, providing inspiration for numerous other coins, all based on solving some sort of problem, or simply offering improvements on the design and functionality of bitcoin itself. Below we can see that discussion about bitcoin makes up the lion’s share of the cryptocurrency conversation. 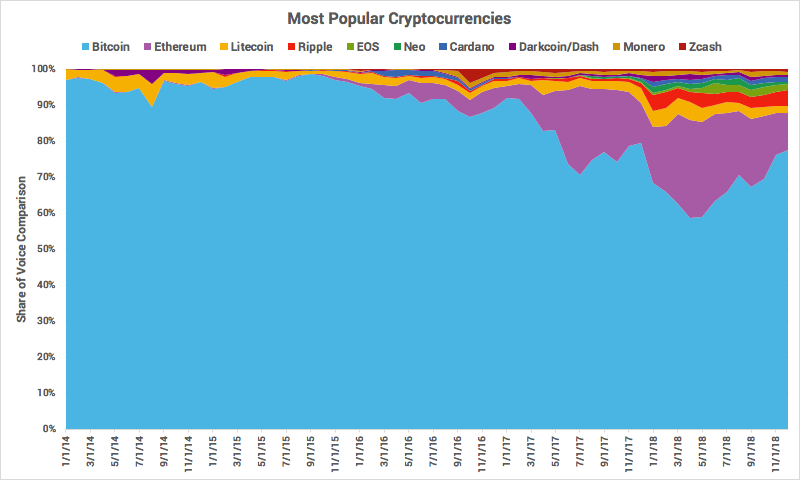 In fact, until 2016, other currencies barely made a dent in Bitcoin’s dominance. In spring of that same year, conversation about another crypto contender, Ethereum, began to pick up. It was soon followed by Litecoin. As time went by, Ethereum accounted for more and more of the discussion volume, reaching its highest level in summer of 2018. Litecoin and Ripple also increased in volume, but didn’t come close to the gains of Ethereum. But the latter has had difficulties recently, and hence Bitcoin hangs onto the crown. It seems unlikely to give it up any time soon.

In closing, the cryptocurrency and blockchain space remain fast-moving areas that are still prone to consumer misunderstanding and confusion. This has led to a significant amount of uncertainty and anxiety.

As the industry matures and new regulations are put into place, it’s likely that these uncertainties will even out and consumers will become more confident about using blockchain and cryptocurrencies. Despite this, consumer interest in the technologies is fairly consistent, although the lure of getting rich quickly from crypto investments may detract from the more serious use cases for blockchain technology.

Want to learn more about FinTech Trends in the APAC Region? Read our report The Rise of FinTech in APAC!