How Radio Stations are Adapting to Social Media: US vs UK

As you may already know, last week we released our Dual Senses reports for both the UK and the US, which explore the impact that Twitter is having upon the radio sector.

There are now nearly 14,000 radio stations in the UK and US alone and as one of our core aims is listening and investigating the multiple ways social media connects brands with audiences, we decided to take a look at how well radio station are faring in this new era of communication.

The research revealed a plethora of groundbreaking insights, answering questions about the differences between TV and Radio, audience and broadcast behaviour, content, tweet timing and much more.

You can read the full report here.

One aspect of the report that particularly interested us was the difference between how radio stations are performing in the UK compared with the US.

1/      On average, only 0.4% of radio listeners tweet about a radio station in the UK and even though the proportion might seem extremely low, it is still 10 times more frequent than  the ratio in the US.

3/      In terms of most popular topics of discussion, for UK, 60% of all listener mentions of radio related to the songs played, whereas US conversation centred around celebrity culture: news, interviews or songs.

4/      With respect to negativity, the percentages were very close: 2% for UK and 1% for US. The main negative topics of discussion debated by Brits were show content, song choice and presenter criticism, while the Americans mostly complained about content and presenters. 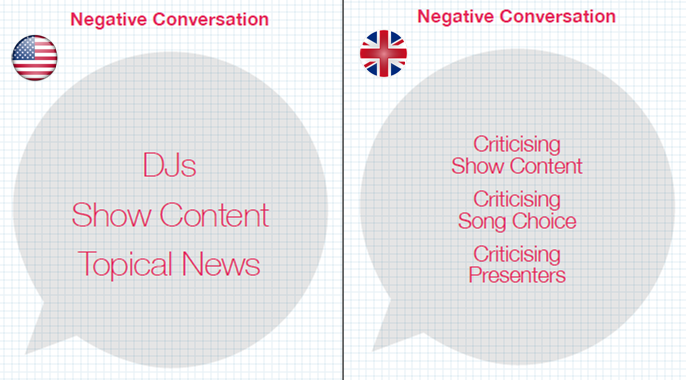 5/      In the US, radio stations are generally tweeting the most on optimum days (Mondays and Thursdays), while in UK, radio stations decrease their Twitter activity when the audience are the most active (Sundays).

8/      BBC Radio One was UK’s radio station most frequently discussed on Twitter, while Hot97 generated the most buzz in the US.

9/      UK radio stations primarily use Twitter as a broadcasting platform, not for engagement. However, just 40% of the messages sent by the US radio stations were broadcast tweets.