Five Lessons in How NOT to Handle a PR Crisis: a Microsoft Case Study

Well. Jeez. It’s been a hell of a few months. Following the announcement of the Xbox One – Microsoft’s new games console to be launched this November – the company’s PR plane nose-dived clean through the earth and out the other side in a flaming, unpiloted heap.

The woe began – as Brandwatch reported – with the Xbox One reveal itself, which was tepidly received by those watching live and tweeting along. After briefly showing the hardware the presentation focused intently on television and sports, instead of the games which the most eager anticipators were eagerly anticipating.

Microsoft’s Albert Penello explained to Giant Bomb’s Jeff Gerstmann after the event the conscious decision behind the presentation was to get all the non-games stuff out of the way and then focus purely on games at E3, the industry’s biggest press event which was then 19 days away.

Not a terrible plan in itself, but there was still an air of disappointment wafting out of the show.

19 days is a long time on the internet. In other interviews and online posts, Microsoft gave conflicted and confused responses to questions about how they would handle used games on the new console.

It seemed like they never thought the question would come up, and into the subdued silence swelled a great deal of negative press and public reaction.

Things got worse. Not only would the Xbox One put restrictions on users sharing and trading discs but it would require an internet connection to function.

A set of policies were described which would cut out people who couldn’t adhere to them, policies which seemed oppressive even to many of those who could engage consistently with such systems.

Microsoft desperately needed to regain control of the situation. They may have expected some minor backlash from those excluded, but without coming back with a strong message of their own, these edge cases became the main talking point around the console.

A solid response was easily deliverable: to speak of the Xbox One as a console for the future, a digital, always-connected platform for every entertainment need. Pretty standard tech talk really.

It could even have been considered brave to push unwaveringly into a purely digital model the world isn’t quite ready for. But the only things coming from Microsoft were excuses and brush-offs.

And then there was silence. Silence can be effective for stifling bad press, but was definitely a wrong move here. When something has happened, when it’s over, then not talking about it can quickly kill the conversation.

But this story wasn’t over, not with E3 approaching and more presentations, more discussion still to come. Microsoft went into damage limitation mode and cancelled all interviews scheduled with the media at E3, a sign of panic and little self-confidence.

Step 4 – Get hurt by the competition

By the numbers Microsoft actually put on a very good show at E3. They delivered on their promise to focus on games. But the main topic of conversation remained firmly rooted around the company and their policies.

A bigger blow came during Sony’s E3 conference for their own upcoming console, the Playstation 4.

In rather bizarre scenes, the audience cheered and rose to their feet as Sony announced that they wouldn’t also be implementing used games restrictions and internet requirements.

The overwhelmingly positive reaction to this was mostly a sigh of relief, although the brazen point-by-point dismissal of Microsoft’s policies by a smiling Jack Tretton and a cheeky follow-up video were really entertaining in themselves.

On the 19th of June Microsoft completely reversed all of their restrictive policies. No simple turn around, this move meant that there was a significant amount of planning, engineering and implementation work thrown to one side. A few people lamented the loss of some fantastical future where games would magically become cheaper and better because of ‘reasons’.

But those willing to embrace the digital always-connected will still see most of those benefits, just now people won’t be punished for existing in circumstances where that’s not possible. It is certainly the correct decision, but a u-turn always carries a whiff of weakness even if it does steer things in a better direction. 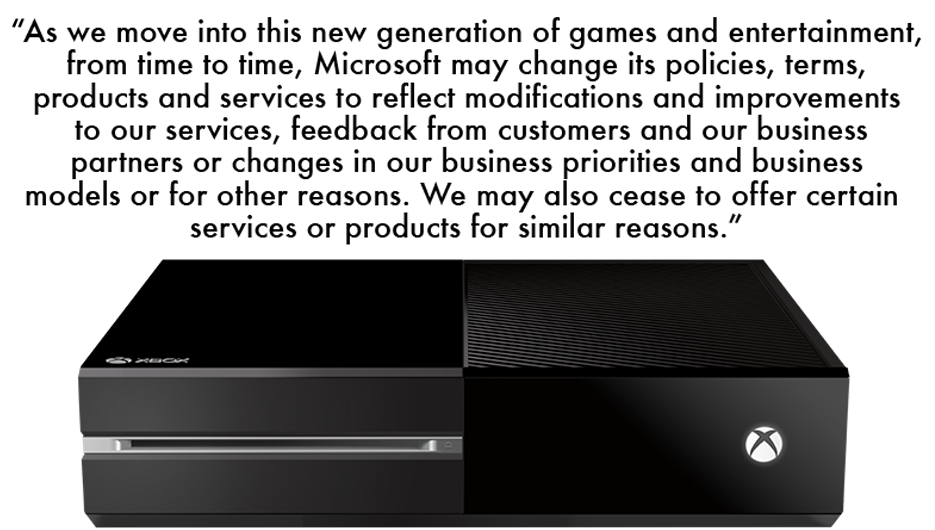 It wasn’t the only reversal either – in the following months Microsoft decided to allow indie developers to self-publish on the system and most recently ditched the requirement for the new Kinect motion sensor to be plugged in at all times. All reinforcing a sense that the console was designed with a troubling ethos and by those sorely out of touch with their audience.

All this and it’s still months until the console is actually out. By the boos and jeers a demo of Killer Instinct for the Xbox One received at this year’s Evo fighting game tournament, perception amongst more engaged audiences remains negative for Microsoft. It has become a communal in-joke to dislike the company and the system, and such an ingrained perception is possibly one of the most difficult things for any company to fight against.

With the console launching £79 more than the Playstation 4, Microsoft have a hard sell to the more casual consumer as well. Given that these machines will probably be around for at least a decade there’s certainly a lot of time for a recovery here, but there’s still so much work to be done after one of the biggest self-invoked brand failures ever seen in the games sector. On the bright side, Microsoft have provided a perfect case study of everything not to do in handling a PR crisis.