Understand how consumers are responding.

An erstwhile colleague (update your blog Miles!) who now works at Google sent me a Wave invite, so i dutifully logged in and had a play around. Here’s what i found

was impossible. I wanted to link it up to my existing Google accounts, but guess what, they are all taken! So i had to settle for some random username which i will never remember and which pisses me off

Once through the username ordeal, the app loads nice and quickly and a bunch of stuff is staring me in the face. Here’s a picture 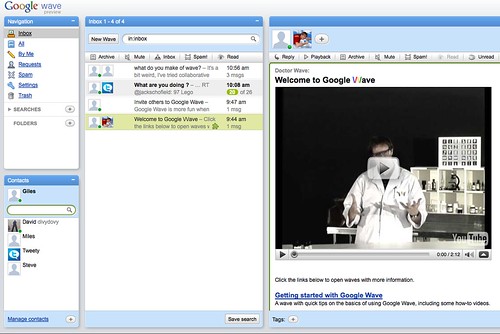 Dr Wave – aka – Greg the happy Aussie Wave product manager then gives me a 2.12 minute intro, care of an embedded YouToob video, which is cute and I’m off.

That’s where things get weird. I’m off, but I’m not sure where I’m off to. My contacts who also have Wave accounts show up, and I hook Wave into Twitter to get some content going, but other than that, it’s not at all clear to me what to do next. I start a conversation with Miles and see him typing on my screen as it were, which is nice, but not ground shaking.

Get access to free expert-built dashboards, daily email bulletins, unique reports and more to help you understand how consumer are responding.

Interview: Carnegie Mellon Professor Ari Lightman On How Students Are Empowered By Learning To Use Brandwatch Consumer Research