At the beginning of September on a trip to the theme parks of Orlando, I spent a day in the Magic Kingdom. It was, of course, utterly magical – but one strange thing I noticed was that the entire theme park was decked out in shades of burnt orange, red and brown, with carved pumpkins and scarecrows at every turn.

The whole place was already geared up for Halloween – a full two months early. Madness, I thought. 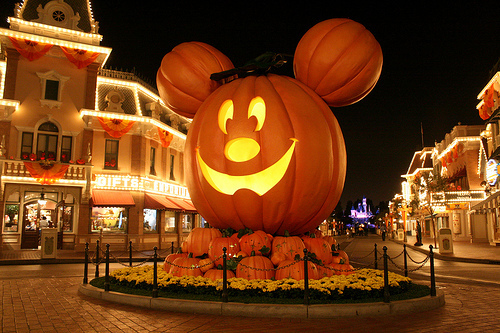 There were fake cobwebs lacing the windows of shops, tiny little black spiders decorating them.

There were aisles upon aisles of Halloween themed candies, gummy worms, chewy skulls. We cynical Brits poked the packaging and made a load of comments along the lines of ‘It’s only September! And what even is Candy Corn?’ 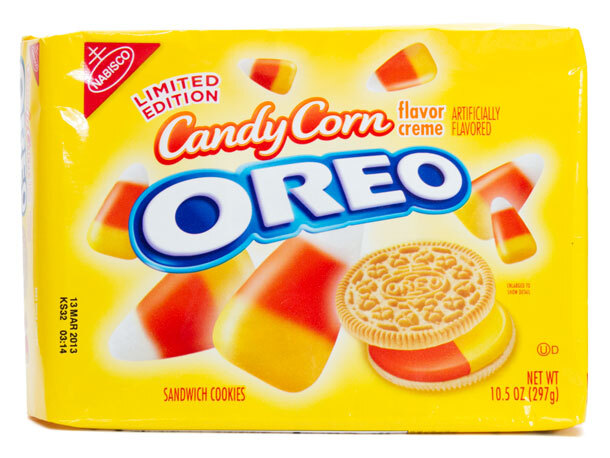 Eventually, though, I got quite used to seeing skeletons and pumpkin spiced everything, from cookies to coffees to candy. I actually got quite swept up in the Halloween hysteria.

I planned to dress my cat up as a ghost as soon as I got home. I bought packets and packets of Oreos with orange filling. I was loving my time. PUMPKIN SPICE 4 LIFE!

Returning back to the UK after two weeks, I was actually a little disappointed that we didn’t appear to be building the same kind of hype for the holiday.

With trick or treating popular in North America since the ’40s, it’s taken a lot longer to become a ‘thing’ elsewhere, having not been common practice elsewhere in the world until the late ’80s, early ’90s. It’s certainly still not as huge a holiday as in the US. But is that just where I live? Is it as popular elsewhere, but I’m just not seeing it?

What with it being just around the corner, I decided to use Brandwatch Analytics to have a look at social media data to see if I could find some interesting insights into Halloween.

Over a million mentions in 4 days

There have been a massive 1.2 million mentions of halloween in the last four days.

Unsurprisingly, the majority did come from within the US – 86%. It would seem that heavily promoting Halloween themed goods from early September drums up interest and gets people talking.

The UK made up 7% of the conversations, with Canada closely behind.

When we take a look at what exactly it is that those in the USA are talking about in relation to Halloween, we see that most are looking forward to dressing up for parties and trick or treating, and are seeking out good deals online.

Americans are using social media to get ideas on what to wear and where to buy, as we see below. The colour green in the topic cloud below indicates a positive sentiment behind the mention. 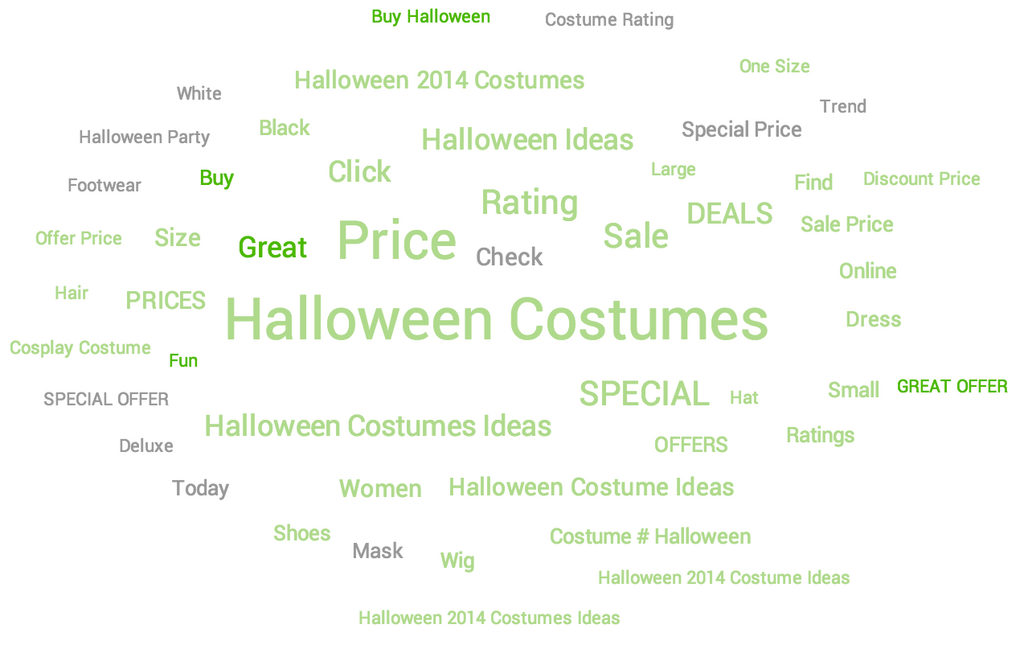 Interestingly, when we look at the topic cloud for the mentions in the UK, it appears there are far more conversations about compeitions and prize draws associated with Halloween.

It looks the British are less concerned with spending money on a costume, and we can also interestingly see one area of conversation that’s building negative sentiment – trick or treating. We’re not as keen as our American friends on having our doors knocked on late at night. We’re total buzzkills.

The data shows that women are more keen to chat about Halloween on social media than men, with a 63/37% split for the period I analysed.

When we look at what exactly each gender is talking about, we see that women are talking more about getting a costume ready, about competitions related to the holiday and also, interestingly, about love and romance.

‘Teenage love spell’ appears here – I’ve never considered a holiday centered around remembering the dead as a prime opportunity to get some nookie, but there you go. I’m old and boring. What do I know.

The only subject that men have spoken about more than women is partying, with a 60/40 split. Boys just wanna have fun, as Cyndi Lauper may have once sung. 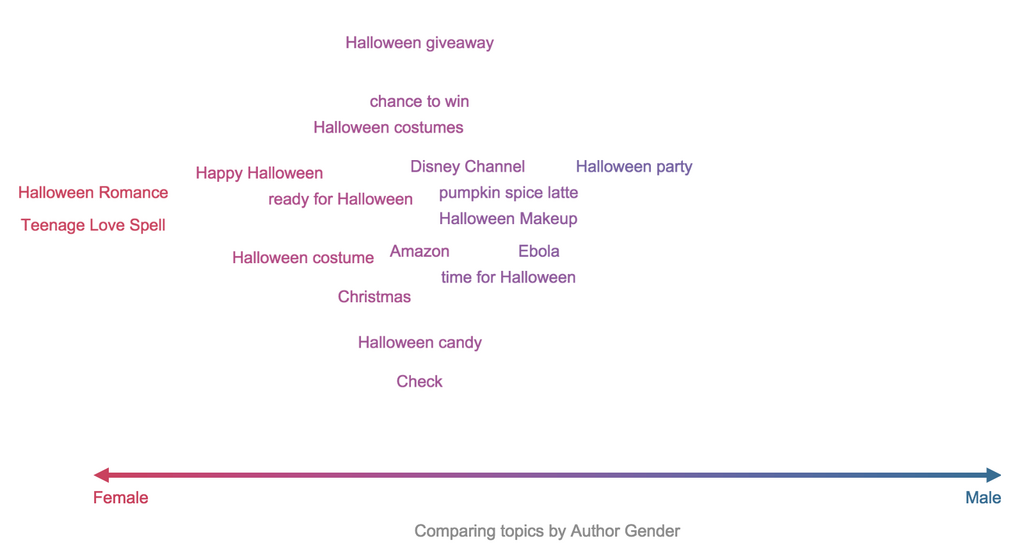 Ebola is a disease, not a costume choice

You may have spotted it in the chart above.

One notable thing I found when looking at the mentions of the last few days is the sheer number of people commenting on how they’re going to ‘dress up as Ebola‘ for Halloween, or seeking out Ebola hazmat suits as a costume choice. 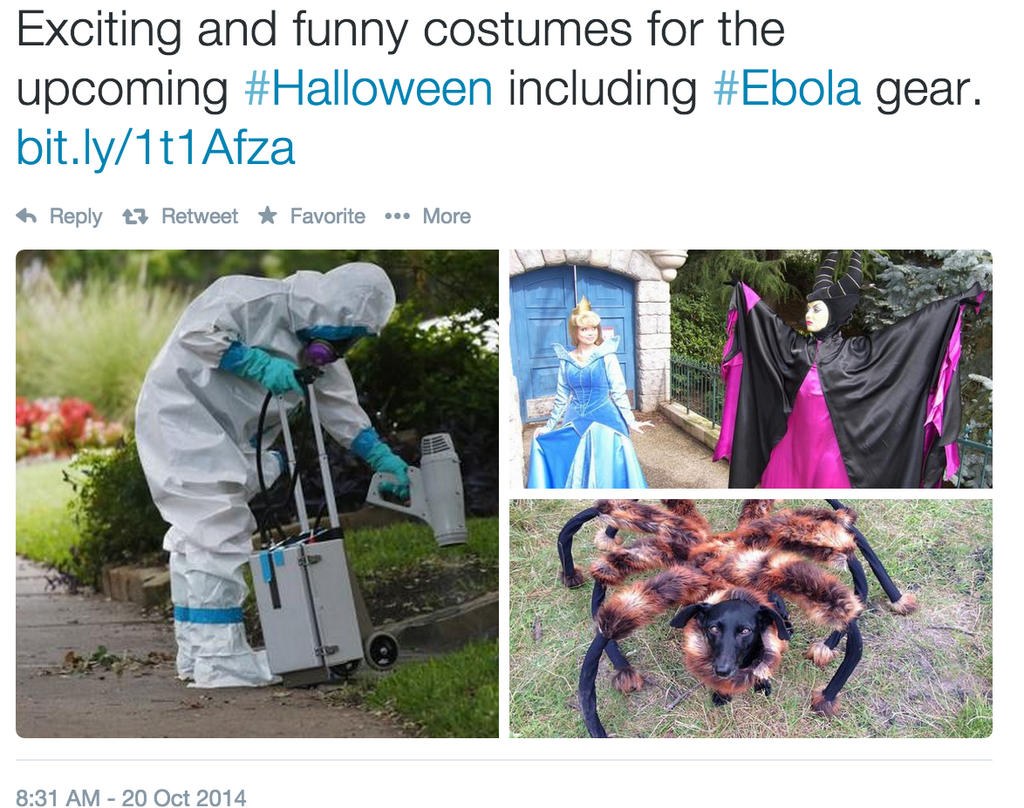 It leaves me with a bad taste in my mouth, but isn’t bothering New York Post columnist Kyle Smith, who is suggesting people shouldn’t take the Ebola costumes seriously.

“Since everybody dies, when we make fun of Ebola we’re just mocking our own fears of death,” he said. “Pretty much the whole purpose of Halloween is to whistle past the graveyard, to score one small point against the Grim Reaper by having a quick giggle before he cuts us all down with his mighty scythe.”

So what other costumes are people keen on wearing this year?

It appears that people love taking to Twitter this year to joke about their costume choices. Instead of talk of witches, monsters or ghouls, here are just a few of the more….creative examples I found in just the last few days:

And my personal favourite:

Halloween will be done and dusted for another year come the 1st of November, and we’ll all be looking forward to the next holidays. Thanksgiving is just around the corner, so we’ll be doing some analysis on conversations online about that, as well as talking about the hype around Christmas. Look out for more here soon.

In the meantime, I’m going to be trying to understand the appeal of Candy Corn and attempting to dress up as a bae.