How Serena Williams Brought Motherhood to the Sports World

What brands can learn by analyzing the growing consumer interest in athlete moms.

The US Open completed this year’s Grand Slam tennis season, with Naomi Osaka defeating Serena Williams. Despite the loss, Serena is arguably the greatest tennis player of all time, and one of the greatest athletes ever.

She has dominated women’s tennis since she turned pro in 1995 —  winning a total of 37 Grand Slam titles, 23 singles titles and 14 doubles titles with her sister Venus, and 4 Olympic gold medals.

These are all unprecedented accolades, but there’s one more that’s worth noting: In 2017, Serena won the Australian Open while pregnant.

Since her pregnancy and giving birth, Serena has come back with some difficulty, after she suffered a pulmonary embolism during delivery. But she has since proven that she is still at the top of her game, making it to the Finals at Wimbledon and the US Open.

Serena’s motherhood is not just a tangential storyline — it’s been at the forefront of the tennis conversation, with ESPN interviewing other mothers, claiming athletes like Mandy Minella to be “pulling a Serena” when competing while pregnant, and brands like Nike and Wilson making products for Serena that align with her motherhood.

How has Serena’s continued success changed the conversation about motherhood and sports? What does the discussion mean for brands? We analyzed millions of online posts to discover:

Moms are a movement in pro tennis

Since announcing her pregnancy, news articles and online conversations have started discussing motherhood in pro tennis at much higher rates. In 2017, when Serena’s pregnancy was revealed (and because of this, her Grand Slam win while pregnant), there were over 140,000 posts and news articles discussing motherhood or pregnancy and tennis championships overall during the 2017 championship. During 2018 so far, there have been 120,000.

"I knew that we were both moms. I’m not sure how often that has happened, if ever. You can be a mom. You can still play tennis. You can be great. You can be in the quarter-finals at Wimbledon"

How one star can create a trend

Seeing Serena leading the conversation in such a movement shouldn’t be a real surprise. Her star power has moved her beyond iconic athlete and she has become her own brand: achieving greatness, specifically black greatness, overcoming obstacles, and now, being a new mom. 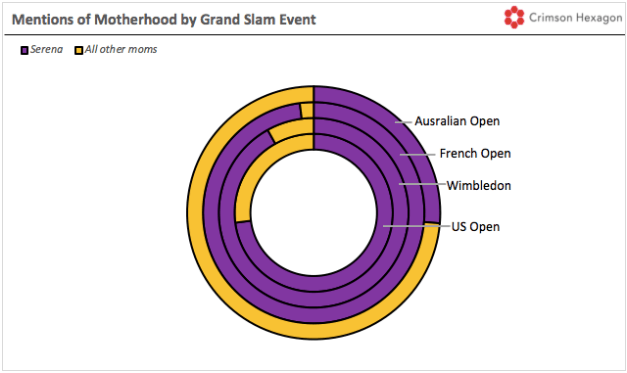 And by utilizing her new motherhood brand, Serena can effectively drive conversation about motherhood, directly and indirectly, at Grand Slam events.

As shown above, people have been discussing motherhood more and more at Grand Slams over the years, but in 2018, Serena dominated the motherhood conversation at every Grand Slam, except the Australian Open where she did not compete this year.

And with her return to tennis after giving birth, she creates that topic of conversation, and thus drives people to discuss, interview, and highlight the other mothers at championships, further increasing the topic.

But what can a trending topic such as mothers competing on tennis’s biggest stage do besides inspire a generation? Well, brands can get in on the conversation by marketing directly with these topics.

In 2017, Serena Williams was the only woman on the list of the Top 100 Highest Paid Athletes, with a lot of that money coming from brand endorsements. Brands have been paying athletes for decades to wear their products, and tennis stars are among the highest paid athletes in the world for their endorsements, which have helped make Wilson the most recognizable brand in tennis.

But Serena represents a unique take on the celebrity endorser. She represents a new type of superstar athlete: the mom.

The mom-athlete image has been growing for years, but exploded in 2017, which coincides with Serena’s birth announcement. Looking at mom-athlete related hashtags, monthly volume has been on the rise over the past 5 years, and images showing moms competing in sports and other high-endurance activities. 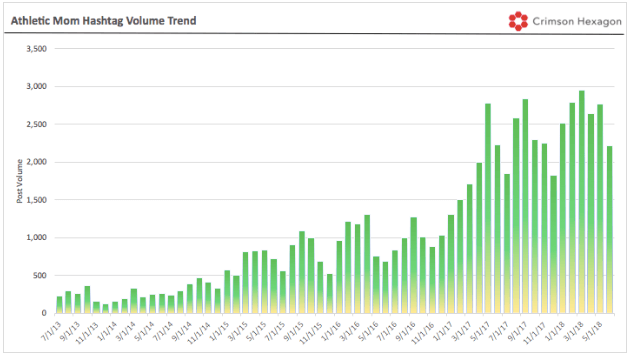 Brands like Nike and Wilson have been wedging their way into this discussion by following this endorsement strategy, by positioning their brand endorsement to follow the mom-athletes trend.

For example, Wilson gave Serena’s daughter Olympia her own tennis racket with the iconic W on the racket. Shared on Serena’s Instagram page, immediately getting in front of millions of her followers.

Nike, on the other hand, dresses Serena for her matches, and her Nike catsuit was a popular topic of discussion at the French Open, mentioned over 25,000 times. On top of that, Serena’s Instagram posts in the catsuit received over 1.4 million likes and other celebrities like Shonda Rhimes posted about how she wanted a catsuit of her own.

Nike’s catsuit garnered a lot of attention, and better yet, it was almost unanimously loved, despite being banned later on, with 95% of posts about the catsuit being positive, giving Nike a nice jolt of positivity among its fan base.

Marketing teams inserting their brand into a trending conversation, especially conversations meant to empower a specific group, and adding to that empowerment, not only helps bring further awareness to that group, but also boosts that brand’s image.

Whether it’s Nike designing a catsuit to empower new moms or Wilson getting an aww factor by giving Serena’s baby girl a racket, these brands receive increased awareness among a new, empowered consumer base.