How to Improve the Quantity and Quality of WOM

“Marketers need to stop trying to control what their brands stand for, and listen to their customers. We are operating in a very much ‘let-go’ world”

Here at Brandwatch there is nothing we like more than a good ol’ bit of analysis.

Our reports are testament to this, if we’re not studying the Twitter landscape, or how social media is used across the business, you can be sure that we’ll be working on a new exciting project.

Last week saw the release of our latest report, Dual Senses, and we are keen to share with you some of the interesting findings we dissected.

If there was one thing that became apparent throughout the report, it was that there seemed to be a hint of disparity between the organisations and their audience. 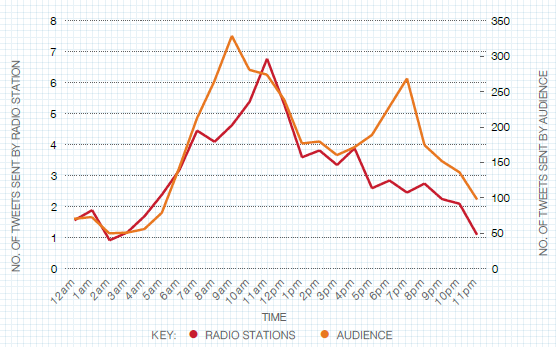 The graph above demonstrates that the listeners are most active on Twitter at the start and end of a working day; however the broadcaster’s accounts peaked at lunchtime. (For more stats on timing disparity, you can download the full report here).

Ah, the hashtag. Some may find it’s relevancy to a social strategy huge, and some not so much.

But whether or not you value its quality, it’s hard to deny that the table below demonstrates a lingering discrepancy between audience, broadcaster and presenter conversation. 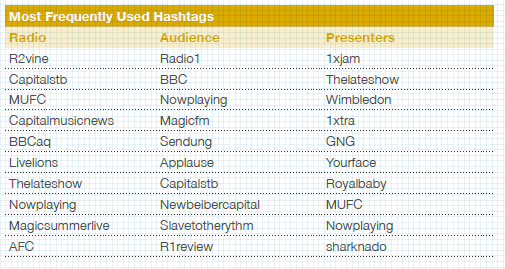 The research demonstrated that audiences were talking about songs and celebrities, whereas radio stations were using the hashtag to promote their campaigns, events and news stories. 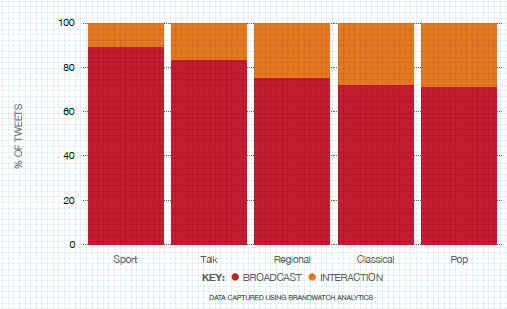 The data also showed that radio stations seldom reply to the comments aimed at them, their shows or their presenters. They are in fact using Twitter as more of a broadcasting platform.

The Dual Senses report demonstrated that though radio stations may not engage with their Twitter audience quite as frequently as they should do, they are still loyal. The audience are so loyal in fact, that 88% of those that tweet about radio only do so to one radio station.

So why is this good news?

Strong customer advocacy is one of the best predictors of top-line growth, and the biggest encouragement of word-of-mouth. They recommend and share a brand two to four times more than the average consumer.

WOM has been prevalent in marketing jargon since the ‘60s, and though it is the most unmanageable form of marketing, it yields the greatest results (don’t just take my word for it, ask Beyonce).

Research suggests that 4% of the radio station’s loyal users have the potential to turn into brand advocates should they be communicated to in the right way; that’s over 7,000 people that could potentially be representing the broadcasters.

Understanding audience behaviour can help improve the quality and quantity of a digital strategy. Radio broadcasters can emulate this information in order to better match their tweet content to the preferences and habits of their audience, as well as interact with them frequently and meaningfully.

The foundations are already there, they just need to be built upon!