How To Use Google+ To Engage Your Audience More Effectively

Google+ is a platform that a lot of brands have been slow to turn their attention to because it’s new and often that begs the question – how am I going to encourage engagement and build an audience?

Let’s take a look at some of the ways you can get started.

Do something special for Google+

It’s easier to just share the exact same content across all of your social networks, but when you put the effort into do something different, your audience is going to really appreciate it.

A great example is this post by Demian Farnworth from Copyblogger, which at the time of writing has over 485 +1s and over 200 reshares:

What I love most about this post is that it’s a valuable piece of content that stands on its own merit.

Make the most of stunning visuals

This post by Rebekah Radice is a great example of a highly engaging post that utilises unique and stunning visuals. 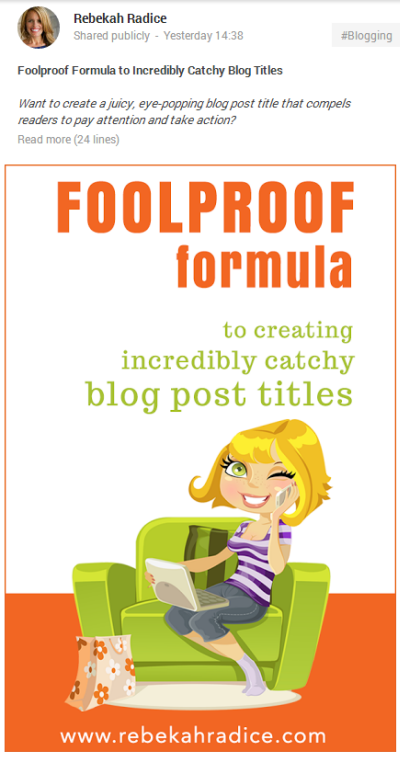 With so much content being shared, it’s important to make the most of visuals where possible and when you see something like the above example, it’s going to make you stop scrolling through your feed and take a look.

Just adding more detail and working towards encouraging engagement can have a huge impact. 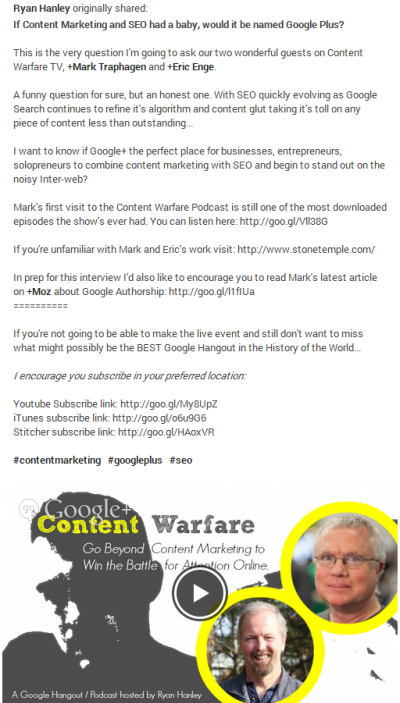 There are a number of factors that stand out here:

The shared circle feature within Google Plus is great but the majority that are being shared just aren’t targeted. They are not being used to their full potential.

That’s why I love the idea behind #Circleplosion, where Dustin Stout curates highly targeted circles to help maximise their potential.

By doing this you are able to increase the perceived value of a shared circle – and they’re great for users too.

Share something that solves a problem for your audience

When you help to solve a problem that your audience has desperately been searching for an answer for, you are definitely going to make an impact.

A great example is this post from Mark Traphagen, where Mark shared a helpful tool for G+ users called ‘The Plus Editor’. 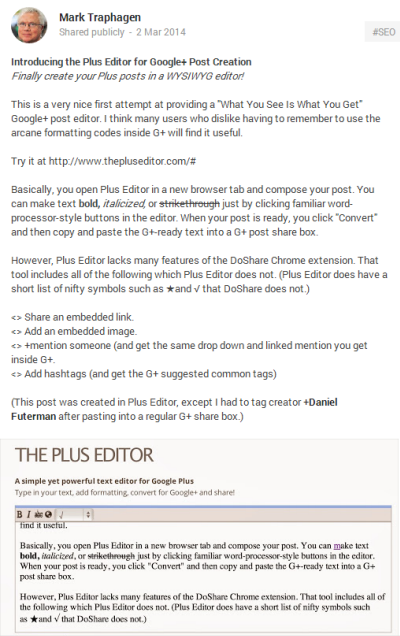 The thing about writing engaging posts is that Google+ isn’t really built for it, so it can be a bit tedious. And this tool makes it incredibly easy.

Google+ allows formatting and the use of special symbols – there’s a lot more available than most people realise. Plus Editor supports all these too which makes it a huge time saver.

You can’t tag people using the tool, although you can edit your post and tag people after without any issues.

Aside from the level of detail in the post, bold title, italic tagline and other engaging elements – the post solves a problem that affects everyone on Google+.

By solving a problem that more of your audience are affected by you will taking a huge step to taking engagement with your audience to the next level.

Make the most of embedding Google+ posts

In late 2013 the ability to embed G+ posts into your own website was rolled out.

It’s an underused feature that can definitely make a difference to boosting your engagement on Google+.

One of the best uses I have seen of this feature is how Ana Hoffman integrates embeddable posts into her weekly marketing posts.

Instead of writing up a full post each week, Ana shares a post on Google+ for each news item and then embeds them in the post at the end of the week.

Since Ana made this change I’ve found each piece of news stands out more and I also engage a lot more on Google+.

Are you on the fence about this Google+ thing?

Google+ hasn’t knocked Facebook off its top spot just yet, although I am seeing more and more marketers completely give up on Facebook since organic reach of pages has taken such a hammering lately.

That being said, I do find Google+ a much more enjoyable platform from a user perspective. The lack of paid content is very refreshing.

From a marketing standpoint, it’s by far the easiest network to build a following on at the moment and it’s a great platform to drive visibility. 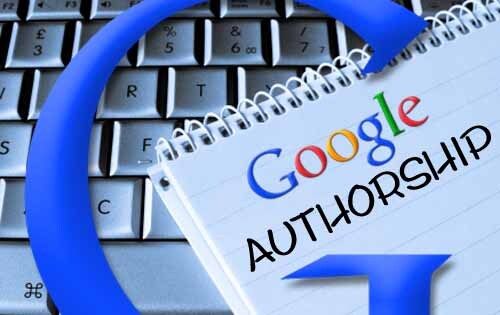 Then there’s Google Authorship to consider which enables you take ownership of your content and allows your display picture to appear next to your blog posts within Google search results.

For those of you that are concerned about the SEO implications, my colleague Jason has discussed how Google+ could be used in the future of link building and it is possible that Google may use Authorship as a basis for determining rankings (see Author Rank) but we’ll have to wait and see.

According to a study by Eric Enge and Stone Temple Consulting, there is no evidence that Google+ shares drive search rankings (yet). It’s worth noting that G+ profiles and pages can gain authority in search.

It’s worth noting though, that with all social networks, those that become the early adopters typically build the largest following (and sometimes most engaged) following.

Want to get started with Google+ but don’t know how?

There are a lot of social networks so it’s easy to understand why some haven’t given Google+ much of a look in just yet.

As a starting point I’d recommend taking a look at Martin Shervington’s impressive guide to Google+ – you’ll get the basics covered along with some of the advanced information you need to know.

How do you engage your audience on Google+?