Introducing Audience Influencers: Know who your audience is really talking about

With Brandwatch Audiences you can now find the influencers who are having the greatest impact on your specific target audience, even if they’re not big names.

Finding the right influencers for your campaigns is becoming harder.

As the influencer industry grows and becomes more professionalized, the top names are commanding larger fees and are more likely to have already worked with one of your competitors. Yet there’s still no guarantee of the real return on your investment. In fact studies are showing that many of the influencers that brands are working with have a large proportion of fake or irrelevant followers.

The best way to be sure you’re finding the right influencers is to start with understanding your target audience. Whether you’re looking for micro-influencers to share your content or celebrities to endorse your products, knowing who your audience is engaged with can help you find the most effective ones. And the best value for money.

Now with Brandwatch Audiences you can instantly find out who any audience is talking about the most and see how relevant they are to the people you’re trying to reach.

Who is your audience talking about?

With Brandwatch Audiences you can build any audience you like from a database of over 450m active Twitter users using a combination of:

Once you’ve identified the people you want to reach, finding out who influences them couldn’t be simpler. Click on to the Influencers tab and you’ll be able to see who your audience is retweeting, replying to or mentioning the most.

You can filter your data to look at the last day, last week, last month or any specific period in between.

The results in the Influencer Tab can simply be sorted by volume of mentions. This is where you’ll usually (though not necessarily always) find the celebrities, news outlets, brands and other big name accounts your audience has been talking about. 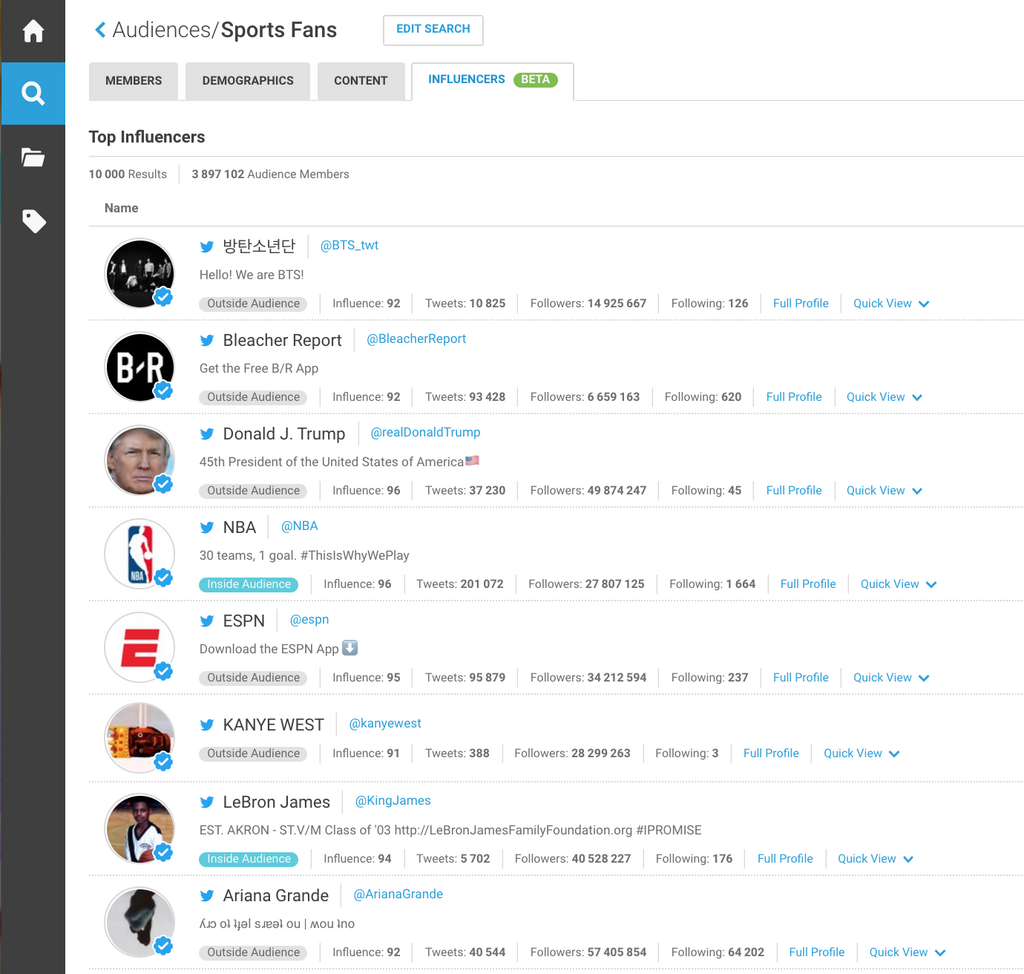 For example an audience of sports fans are talking the most about Korean pop band BTS, President Trump and Kanye West as well as some big sports media accounts.

To be more specific, you can edit your search to instantly discover who women or men talk about the most, or how the influencers of your US-based followers differs from your UK followers.

These top results are interesting but not as useful as they could be. By far the most useful metric when looking for bigger influencers like these is the Relevance score. This looks at how much more likely an influencer is to have been talked about by your audience compared to a global benchmark as well as the volume of mentions. Relevance is given as a custom score out of 100, helping you quickly compare influencers in this way.

By comparing the Relevance score for different people you can quickly discover that some are not only popular within your audience but are disproportionately influencing them in particular.

For example these sports fans are more than three times as likely to be talking about gaming vlogger Ninja and actor Ryan Reynolds.

Whether you’re looking for up-and-coming bloggers or niche influencers, you can use Audiences to find people with smaller followings that regularly engage your highly specific target audience.

These influencers might not have as large a reach as some but if they’re being talked about by the people you want to reach they could be just as effective. And they’ll probably charge you a lot less.

The Relevance score is going to be crucial for finding micro-influencers. And if you want to look deeper into a larger audience’s influencers you can export up to 10,000 and find the people with smaller followings that are having the biggest impact.

For example ‘sneakerhead’ @snkr_twitr and podcaster @RiqueTheRuler_ both have fewer than 30k followers but are being engaged with a lot by sports fans.

Another good way to find these kinds of influencers is by being more specific with your audience search. Tighter communities tend to have smaller influencers in common whose content they share.

For example an audience of medical practitioners in the UK returns a very different looking list of top influencers. There are key UK politicians and health organizations but also several lesser know tweeters who are nonetheless very influential among this crowd. 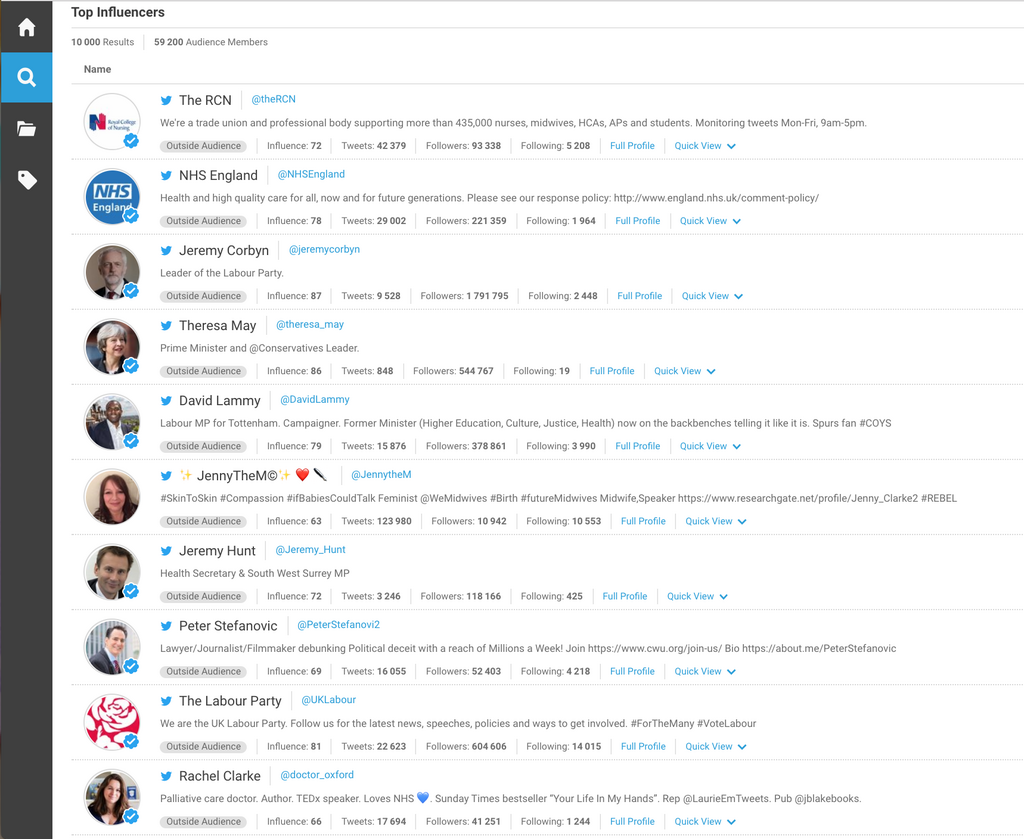 The Brandwatch Influence Score is also useful when assessing smaller influencers you may not have heard of before. This score isn’t based on their influence within your audience but their influence in general. It takes into account a number of metrics, not just follower numbers, including how often the user is retweeted, replied to or mentioned and also the influence of the people who are engaging with that user. This means being retweeted by hundreds of ‘spammy’ accounts won’t increase your score as much as genuine regular engagement with a real online community.

Once you’ve found relevant people for your influencer marketing campaign you can tag them within audiences to keep track of them all in one place.

If you have a Brandwatch Analytics account you can also set up an alert to receive an email as soon as any of the influencers in your lists mention your brand or campaigns.

And if you want to go a step further, you can add the influencers you’ve found in Audiences to a query in order to track all of their conversations. This is particularly useful if you want to create a ‘tastemakers’ panel and keep on top of what the key people in your industry are talking about at any time.

For example if this group of influential travel bloggers are to be believed, Mexico is the next hot holiday destination.

Studying and, more importantly, comparing what groups of people are talking about over time is what we’re focused on helping Audiences users do. This year we have many exciting new features launching that will do just that: helping you better understand your audience and identify the most effective ways to reach them. 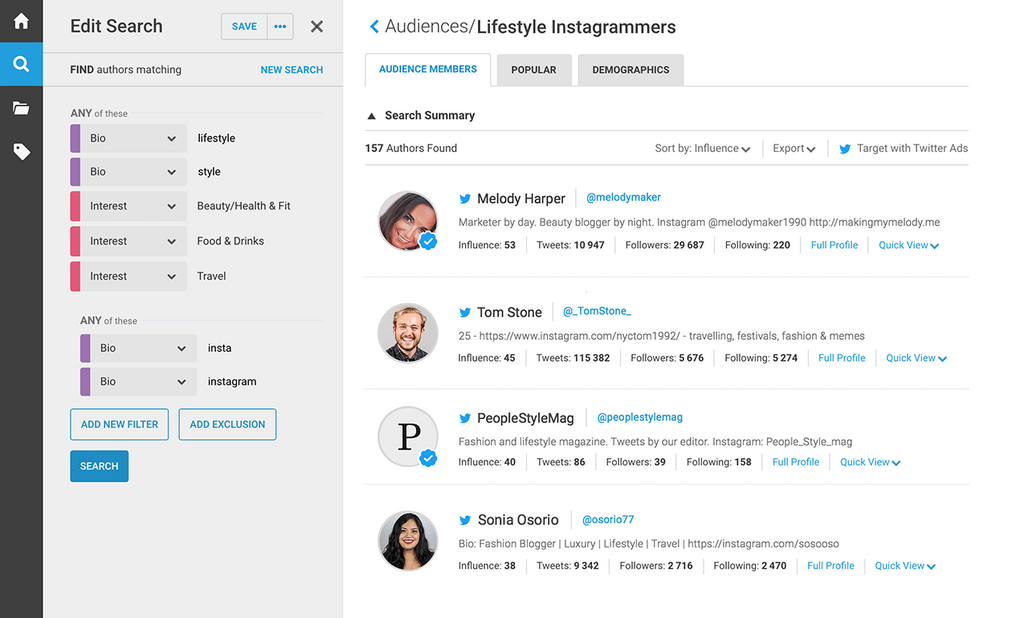 AFL vs. NRL: Who Scored Online?