Award season may be nearly at an end, but online buzz is growing. The Oscars countdown has critics and cinema-goers pondering alike: who will bag an Academy Award?

Will early favourite Lincoln prove December critics right? Or can late contender Argo add one more accolade to its list? And what about Affleck being snubbed for best director?

We at Brandwatch, in association with The Credits, have built a visualisation to show which contenders might make the grade at the 85th Academy Awards.

The DataViz reveals which films are making waves online, and how much of this takes the form of positive predictions. Volumes of positive mentions are then used to pick the top nominees for each award.

Take a look at the dataviz here.

But, in the dizzying world of social media, predictions are rather old hat. Counting mentions having been done a thousand times, we thought we’d take it further this year and show off our social-savvy capabilities. Enter the Brandwatch Social Oscars 2013.

Whereas most sources refer to the implied homogeneity of ‘online buzz’, we’ve broken this down into useful author types.

Put simply, the DataViz lets users compare the opinions of critics and the general public. Oscar winners are chosen by AMPAS members (just shy of 5,800 professionals are permitted voting rights), but who would win were voting handed to the masses? Our sources say some nominees would keep their top spot.

It doesn’t take ‘critic’ status, apparently, to be impressed by the vibrant visuals of Life of Pi, or feel pangs of patriotism at Daniel Day-Lewis’ titular role in Lincoln.

Elsewhere, authors are less congruent. For leading actress, critics may be pointing in Jessica Chastain’s direction, but the public are more preoccupied with Jennifer Lawrence’s oddball role in Silver Linings Playbook.

The best director category is also a strange case this year. Ben Affleck, who won best director for Argo at the BAFTAs and the Golden Globes, didn’t even feature on the Oscar nomination list. This means viewers can’t look to other ceremonies as indications of Oscar success. Critics are currently siding with David O. Russell, while the public appear more comfortable with Spielberg’s household name.

But what happened to Lincoln? The historical drama continues to fare well in other categories, with Daniel Day-Lewis still the most popular leading actor. Many, however, have their eyes on best picture. Fighting to follow the likes of The Artist and The King’s Speech, our nine nominees are currently positioned as follows: 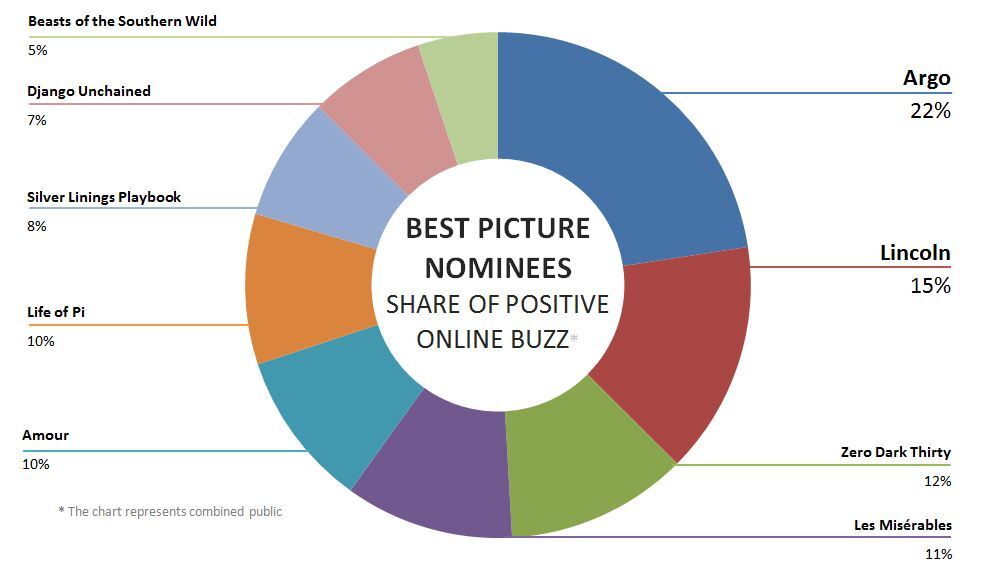 Argo and Lincoln as top contenders

This hasn’t always been the case. Tracking popularity over time, it becomes clear that Argo’s status is built on its recent winning streak. When the Oscar nominees were announced, Lincoln was associated with greater positivity than Argo. However, Argo swooped in to claim best picture and best director at the Golden Globes, which started to tip the balance. By the SAGs, Argo’s ‘outstanding cast’ award fuelled further predictions of Oscar success. This was also true for the DGAs on February 2nd, leaving Lincoln in second place: 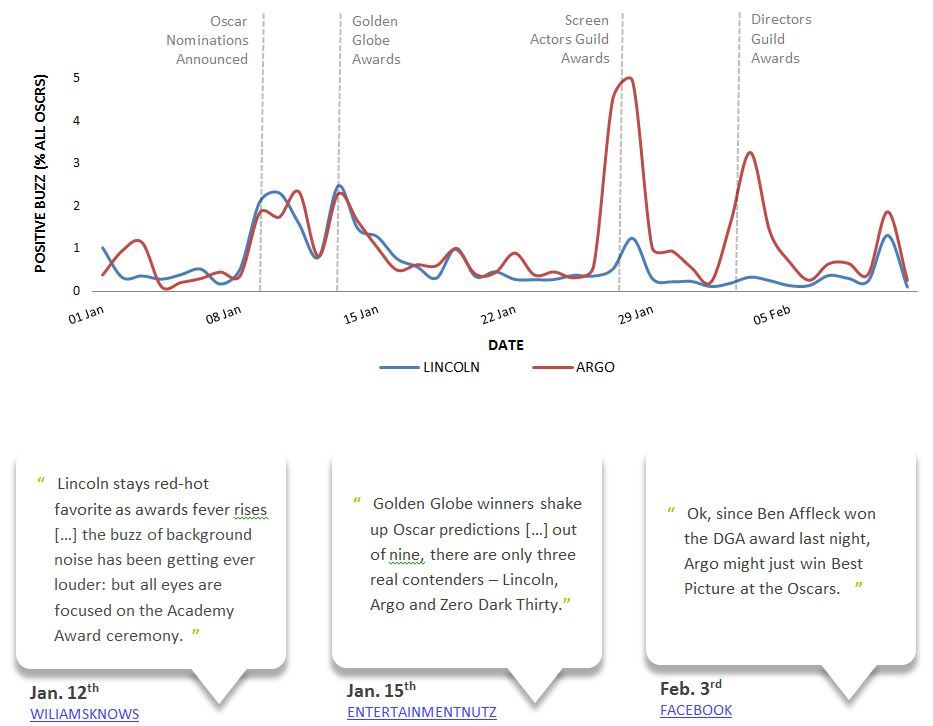 Some claim that the film with the most nominations is likely to win best picture. Others consider best director to be the most accurate indicator. The latter poses a problem: Affleck isn’t nominated for best director at the awards.

If Argo manages best picture regardless, it’ll be the first time since 1989 (when Driving Miss Daisy bagged best picture though Bruce Beresford failed to make the nominees list).

So the 85th ceremony could mark a change in expectancies. We can’t say with certainty who will make the final cut (voting opens on February 8th and closes on the 19th), but we can gauge the feelings of critics and the word on the street. Time will tell whether the 6,000 or so AMPAS members agree with the public.

If not, it seems less likely that acclaim will translate into profits. The Brandwatch Social Oscars project is always amassing data, so don’t forget to check back now and again to see nominees develop in the run up to the ceremony.

Acceptance speeches at the ready…