This  is the first  post of a weekly political series we are running analysing social media conversation in the run up to the US elections. It is written by our Head of Insights, Gareth Ham.

Gareth has been working in media monitoring and analysis for five years, beginning in the public sector for quangos and other governmental institutions, including the British Foreign and Commonwealth Office. He has been at Brandwatch since September 2011, managing bespoke analysis projects for a range of clients and covering global political and commercial issues for our market-leading studies.

Election campaigns on both sides of the US political divide commenced in earnest this past week. Thursday’s speech by President Obama accepting the Democratic Party nomination capped a week of recovery for the incumbent following minor gains made by the Grand Old Party in Tampa, according to a Washington Post-ABC News poll published in late August. Former President Bill Clinton delivered a keynote worthy of the expectation that has always preceded appearances by the ‘Big Dog’, Julián Castro cajoled the Latino vote and the First Lady spoke the most public of love letters to her husband in Charlotte.

While reporters last night attempted desperately to critique Obama’s decorum, his content, his eloquence and presentation, ordinary Americans were taking to social media platforms to address the role of the White House in tackling the issues important to them. By monitoring Twitter during the convention weeks of each candidate, we have been afforded insight to the opinions of everyday voters across the United States during the weeks of the Republican and Democratic Party conventions, held in North Carolina and Florida respectively. Social media may be adding weight to the views of potentially disenfranchised Americans. 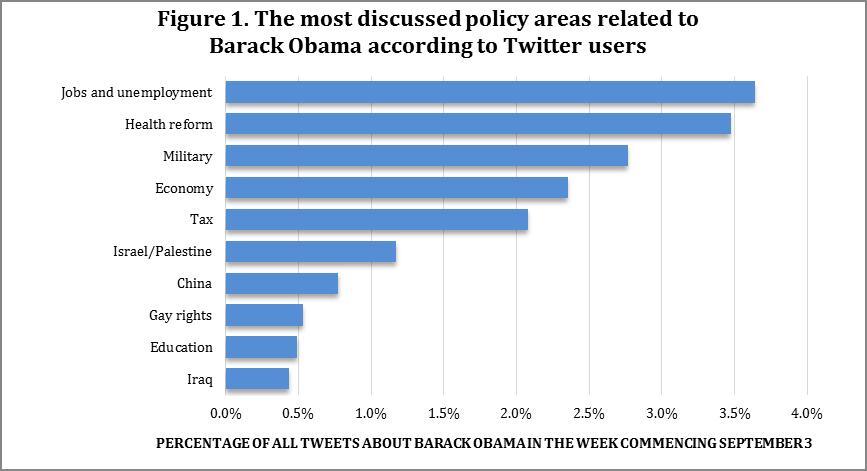 Significantly, and correlating with the content of both speeches by incumbent and challenger according to the Washington Post’s Conventional Wisdom tracker, policy areas influencing working and lower-middle class Americans were at the fore. Twitter users addressing President Obama during the past few days discussed a wider range of policy areas than tweets posted about Romney, although largely focusing on jobs, health reforms, the military and taxation. Micro-economic issues accounted for more Twitter updates about the President than any other policy area monitored in the period, with ‘Obamacare’ a close second (see figure 1).

Romney-oriented chat in the previous week was comparatively focused on one area: jobs and unemployment. Nearly 8% of all Twitter updates that mentioned Mitt last week also noted terms related to the everyday impacts of a poorly performing US and global economy (see figure 2). Romney tweets also heavily conveyed thoughts about tax and the economy more generally. 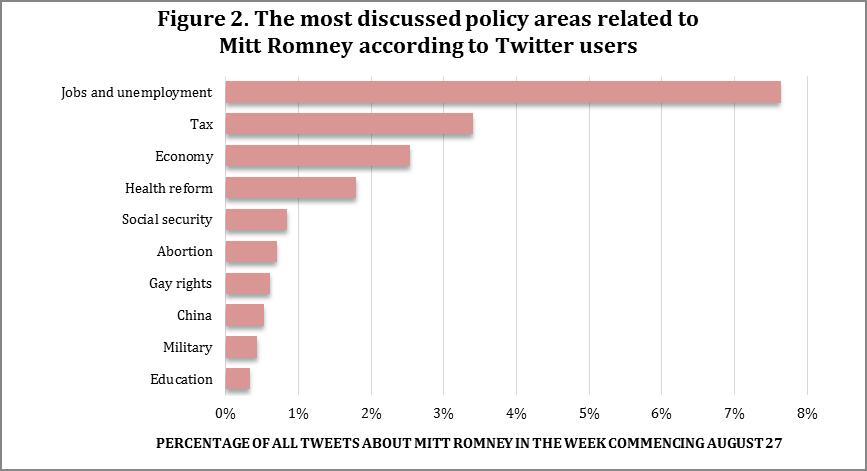 It has long been thought by political commentators that the election battle will be fought on the economy and its impact on the electorate. After inheriting a tanking financial sector and a nose-diving Wall Street, the President has failed to turn this around in the eyes of many, to the point where, according to social media users, these issues are still more noteworthy come election time than almost any other.

With the exception of tweets noting the US military and discussion of China, Mitt was rarely noted in relation to foreign policy. Notably, Iran and Afghanistan, two arenas where many voters across the US could be seen to favour a more heavy-handed approach, maybe the experience and diplomatic skill of Obama is seen as increasingly necessary? Iraq, Arab Spring-related issues and Israel/Palestine were also more heavily weighted towards Obama, with the latter possibly as a consequence of featuring strongly in the President’s Charlotte oration.

Similarly fascinating is the shift in focus where policy areas are concerned. Research carried-out by Brandwatch around Super Tuesday in March revealed abortion to be a significant issue for discussion on Twitter, proving to be the most salient issue in the Republican race in the week prior to March 7. Iranian-oriented politics and gay rights have also shown to be less prescient in the presidential race than for those seeking the Republican candidacy last spring. 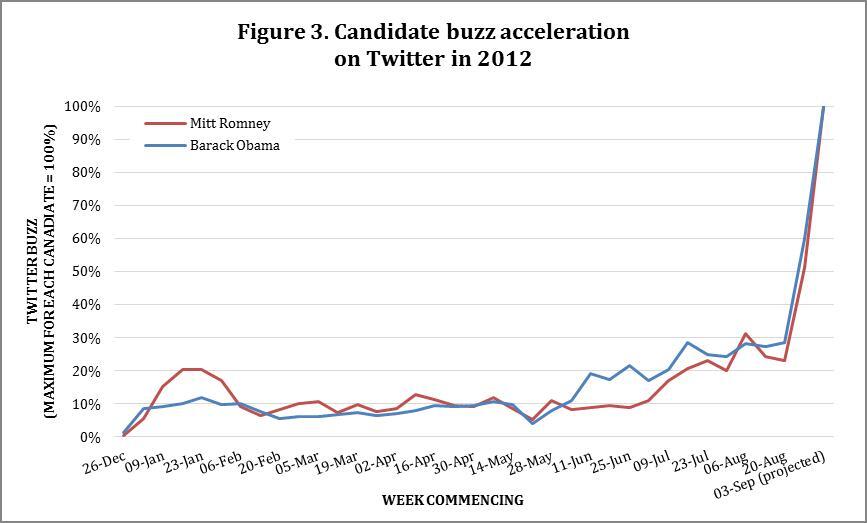 Importantly, however, gay rights and abortion continue to be an issue for Romney more so than Obama. The two areas of policy are often debated on social media platforms and many online users may feel affinity with the Democrat stance. Is the weight of emphasis on economic policy representative of cyclical politics, with foreign policy off the front pages in the summer, or are domestic issues simply more crucial to the average voter as the decision draws nearer and social media users take to Twitter in increasing numbers (see figure 3)?