The Nationwide Backlash: Is Negativity Inevitable for Financial Brands?

The Nationwide commercial during the Super Bowl was a flop on social. What can other financial brands do to foster a positive reputation online?

No one would have anticipated that the Super Bowl commercial generating most controversy and online chatter, setting off a firestorm on social, was released by an insurance company.

Late last night, Nationwide’s commercial, in one of the most prized ad slots of the year, took the audience by surprise. Their video presented a child telling his story from beyond the grave and listing all the things he would never get the chance to do – riding a bike, travel the world, get married – all because he’d died.

This proved to be a risky strategy for Nationwide – the unexpected, depressing turn that the apparently cute and harmless ad takes towards the end has lead to a wave of online negativity.

As illustrated in the chart below, there were over 9k negative mentions in the first six hours following the broadcast of the ad.

The #MakeSafeHappen campaign was meant to raise awareness of the main cause of childhood deaths – preventable accidents.

However, their approached might have been perceived differently and critiqued less if Nationwide hadn’t tried to link such a sensitive topic during a football event – often associated with nachos, beers and loads of fun.

Shortly after the #MakeSafeHappen conversation on Twitter boomed, Nationwide reacted, stating: “Preventable injuries around the home are the leading cause of childhood deaths in America. Most people don’t know that. Nationwide ran an ad during the Super Bowl that started a fierce conversation. The sole purpose of this message was to start a conversation, not sell insurance.”

A key lesson to learn here would be that the effectiveness of a campaign isn’t solely determined by the idea behind it and its purpose, but most importantly how, when and where you decide to communicate it.

The challenge for financial services brands has always been reviving the personal aspect of their customer experience without diminishing the much-demanded convenience.

Nevertheless, are financial services brands employing social media in the same way as those from other industries?

There are several aspects specific to the financial services sector that make it a more complex and daunting initiative than for other types of businesses. 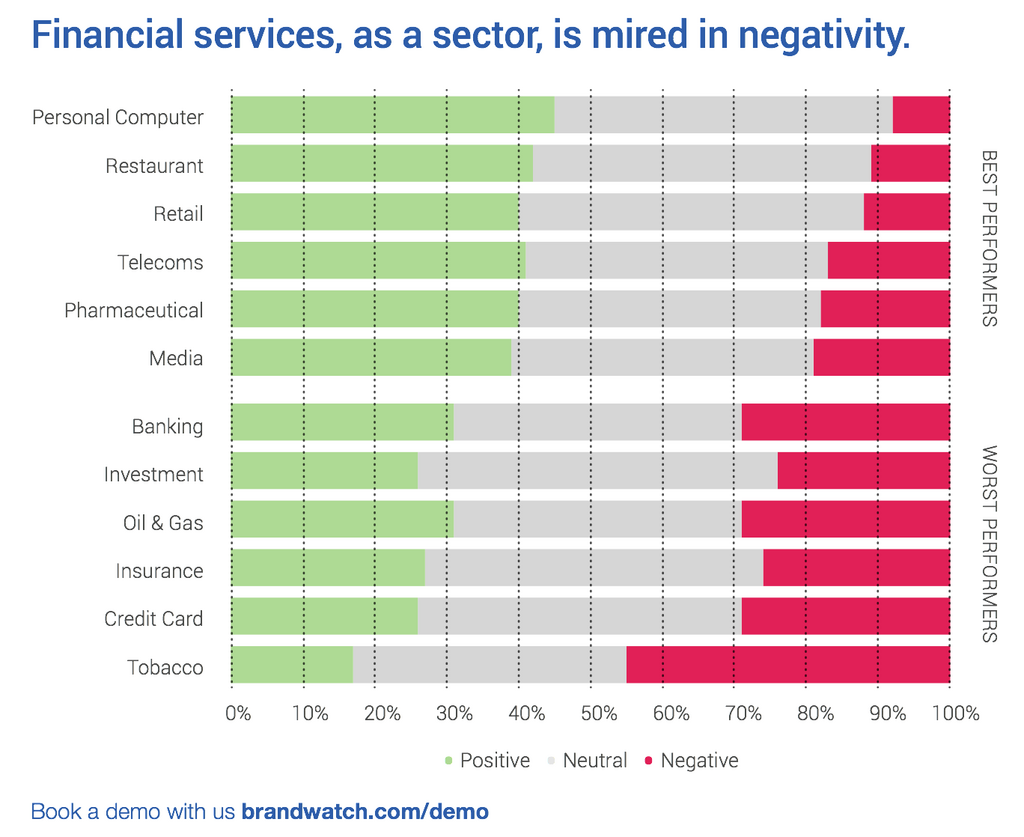 As shown in the chart above, financial services is one of the sectors mired in negativity, alongside the Tobacco and Oil & Gas industries.

For obvious reasons, financial brands are prone to face more irritation from dissatisfied customers than most others and therefore, social media engagement for them predominantly consists of picking up complaints and apologising.

However, as Andrew Schrage of personal finance forum Money Crashers states, to ignore online negativity will be much more detrimental to the brand and its reputation.

What do consumers want from financial services brands?

Many businesses are taking the opportunity to use humour and informal language to express brand personality and foster a better relationship with the consumer. 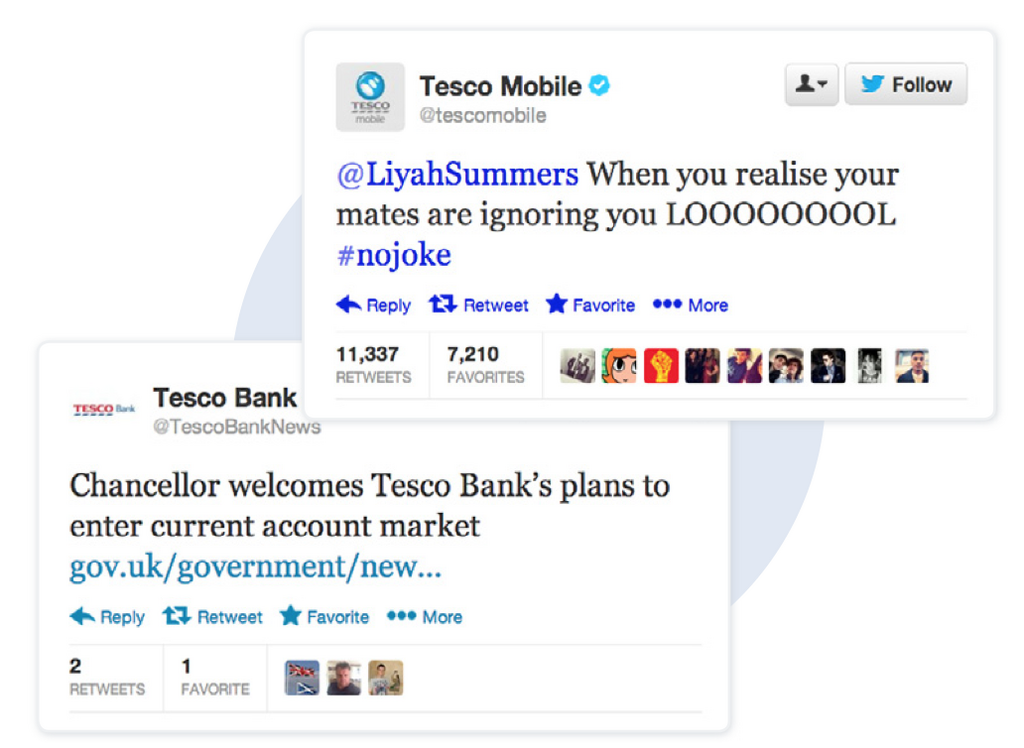 However, finding the right balance between character and responsibility is a major challenge for brands.

Research reveals that at least 80% of customers that submit a query to a brand via social media expect a response on the same day. Around half are looking for a brand response within two hours, with 30% of Twitter users and 25% of Facebook users expecting one in under 30 minutes.

One of the biggest challenges that financial services institutions have been constrained by is that of regulation.

Nonetheless, to highlight how financial services businesses can succeed on social media, in a sector often associated with negativity and complaints, without contravening legislation, we’ll be looking at Simple’s use case, a Portland-based banking company.

Its informal customer service style, stripping jargon and legalese from online interactions has lead to a huge demand of new accounts. The waiting list is more than impressive!

With no physical branches, Simple is using its online presence and communication approach to differentiate. Interestingly, support teams are not given scripts, being encouraged to respond to enquiries in the most human, natural way possible. 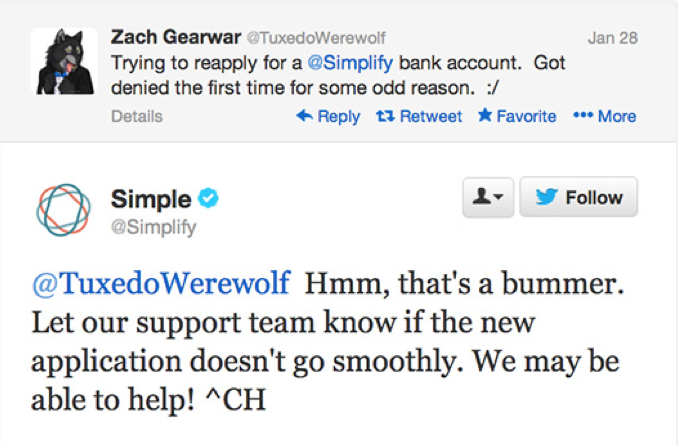 This technique has helped them develop and build relationships with fanatical advocates and their game plan seems to be working: the rapid rate of growth and success the company is enjoying is testament to the strategy.

Even without this focus on personal, character-driven customer care, the benefits of having a proactive social media customer service team are plentiful.

In a sector where negativity is often perceived as inevitable, modern financial services companies, such as Simple, are proving that even in this highly regulated environment, customer expectations can be exceeded.

As a result, building a remarkably positive reputation through forward-thinking approaches to social media, can no longer be perceived as unattainable by financial brands.