Looking at the Success of the Madden Giferator

The Madden GIFERATOR was design with one goal in mind - pumping up social shares, and creating an exciting real time ...

The only name in NFL gaming is Madden. You’d think that with the market cornered they be content with lazing about and raking in big stacks of American football money.

EA Sports’ Madden Giferator was design with one goal in mind – pumping up social shares, and creating an exciting real time advertising platform unlike any other.

I have been looking at brand marketing through social media for over a year on my blog, and I can’t think of a better campaign that has combined social media, their product, and real time marketing.

The basics of the EA Sports Madden Giferator is that they have produced their own in-house GIF generator. What starts to set it apart is that these GIFs are made using the Madden game engine – letting those who use it see how powerful the game engine is, and the detail of the graphics.

Before I get too far ahead of myself, a GIF is a series of images which mimic video, but have no sound. They’re quick loading, and are nearly perfect for Twitter as you don’t have to force your followers to listen to audio when they’re on the bus!

Here’s an example from EA Sports themselves:

You are able to share your Madden GIFs pretty much anywhere, but Twitter and its meme friendly nature has been the target.

Due to how much attention span people have on Twitter, GIFs are likely always going to thrive there, and this is important as more brands move to Twitter from Facebook. With funny GIFs like this, what isn’t to love:

Or hilarious videos like this when you splice a bunch of Giferators together:

Ok, we’ve seen people goof off with GIFs on Twitter a hundred, hundred times before. What truly sets the Giferator apart from other memes is their partnership with Google’s ad networks, and the real time ads they generate with them.

This means that when something big happens on Sunday (or Thursday/Monday night), the ads that are displayed can change. As an example, that I am in no way projecting as happening, say my man Troy Polamalu gets one of his crazy sacks on Cam Newton this weekend.

The Giferator can then make a GIF that displays across the Google ad networks. Maybe it will look like this: 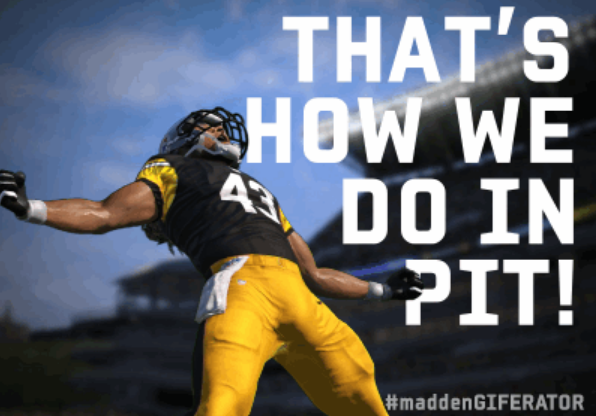 Problems EA Sports has been having with the Madden Giferator

If there’s a major fault to be found, it’s with the NFL and not with the Giferator.

The NFL is having some major black eyes lately due to player actions off the field, and people are creating GIFs around it using the Giferator. I’m sure that the NFL would rather not see this, and that EA would rather not have their product used in such a way.

In an effort to try and head this issue off, EA has banned certain words from being used on the Giferator, and you may not guess what they are. Examples include “brain,” “concussion,” “BOOM,” and “lesbian.” The usual four letter offenders are also blocked. Many users have complained that they can’t use these words, but this is EA’s baby and we’re going to have to play with it according to their rules.

At the end of the day though, it’s about having some playful fun, not being rude or disrespectful.

Who needs words like those which are banned if you want to do that?

Ok, no seriously, why can’t I say BOOM! when it’s one of Madden’s catchphrases? gripegripegripe…