What are the top reasons consumers advocate for or detract from big retail brands online?

Get the Report
News

Good morning everyone! It’s bright and early and the beginning of NYK day two, and if you followed the liveblog yesterday , or the Chicago liveblogs back in May, you know how this goes down.

If not, in short, I’ll be updating this throughout the day with all the happenings at the Now You Know Conference here in London.

Follow along on Twitter and Instagram with the hashtag #NYKCONF. Get strapped in. Get a massive coffee. We’re going deep into the world of customer market insights.

I’m back to bid you adieu. Massive thanks to everyone who joined us here in London for the past couple days, and we hope to see you next time, in DENVER (!!), for a ‘feeding frenzy of social intelligence’.

It’s been an awesome two days of getting to hang with our amazing customers, learning from mega-brains and enjoying some swag. We’ll be writing up talks in the coming weeks, so don’t miss them.

Time to wrap up!!!! What a great 2days!! Hope you have enjoyed the "social media shower" (to quote @willmcinnes ) ?@Brandwatch #NYKConf pic.twitter.com/JnhlWlgAOZ

Social data is flawed. Your data is probably flawed too. Combining them is hard. 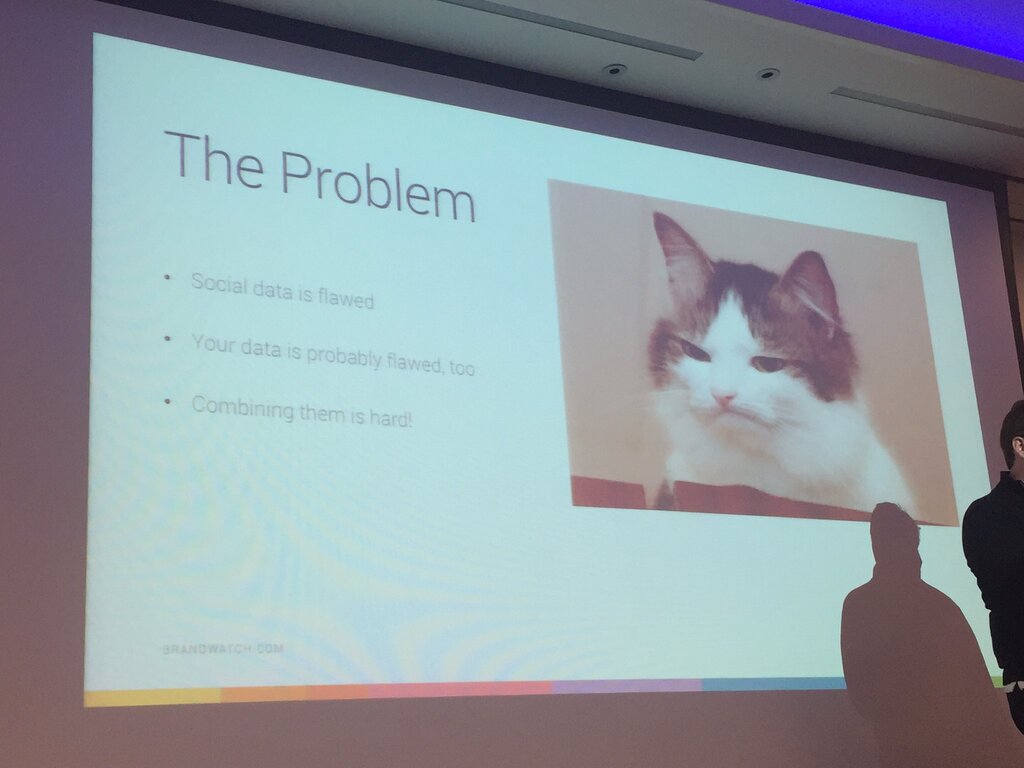 After asking everyone in the room to raise their hands if they have various social networks, it’s clear that the people in this room are exceptionally socially-savvy.

Almost everyone uses Facebook, Twitter, Instagram, and Snapchat. One great thing about this is that there are tons of tweets for me to include in this blog! Thanks guys.

Social data has a lot of problems but we can't really search where there is no light. Dr Siegel @Brandwatch #NYKConf

Paul’s been explaining correlation and causation, featuring this brilliant graph from Spurious Correlations.

Everyone’s favourite Doctor is back to talk about the challenges that come with social in the real world.

This is a practical, practitioner view on why social media data is ‘hard’.

Watch along on the live stream!

Sven has been talking about how Ericsson uses groups and filters to learn more about conversation about 5G. Yes! 5G. That’s a thing. Remember the days of just G? I do. Bad times.

Social CMI: Using groups and filters in order to stay on top of the 5G conversation online with Sven Bergvall from @ericsson #NYKConf

Sven is sharing the catch-all Query his team uses to find all the conversations they then want to zoom in on.

His team are then left with a topic cloud that needs looking into more deeply in order to extract the juiciest insights.

Greetings! We are all back from lunch, which was delicious, thanks for asking!

Back in the main room we’re watching a presentation by Sven Bergvall all about how Ericsson uses social data to delve more deeply into topics.

Just before we get into it, here’s a couple of #NYKConf stats:

Still an afternoon of #NYKCONF left, but so far it has generated 1303 mentions from 355 unique authors in 25 countries. pic.twitter.com/w0TJD4xDRd

Lunch is being put out – and gifs are being created. TECH!

12.07pm – Getting to know your Audiences in Brandwatch Analytics

Loving Charlotte Vang’s exploration into how people talked about the Rio Olympics.

I’ve just been having a look at the agenda, and I’m really looking forward to the Ditch the Label case study later on. If you missed it, we just published a huge study with the anti-bullying charity. Download it!

We’ve also been studying what you guys have been talking about throughout the event. Looks like Dr Paul is a big hit once again…

11.51am – Getting to know your Audiences in Brandwatch Analytics

I’ve popped back into the main room to check out the session the Research Team are running on using the Audiences tool.

These hands-on sessions are a hark back to the Masterclasses you may have attended here in London, in NYC or San Francisco. They always remind me that I should be using the platform in many different ways – it’s always good to have a refresher.

Next up: Analysing the differences millennial + mature audience conversation during #Rio2016 . #NYKConf

11.40am – Social Intelligence Revolution in the Media Industry

Got some good tweets coming in about Jennifer’s talk. She’s covering how the viewing habits of the general public have changed so monumental over the last decade.

A great summary of the changing viewing habits of the public at #NYKConf hosted by @Brandwatch pic.twitter.com/A4PmRkMITD

This is the reason I don't have time to do anything else #NYKConf pic.twitter.com/1PvzUde9KZ

If you’re here at Prospero House, don’t forget you can go and pick the brains of our Research Team in the Innovation Lounge – they’re poised and ready!

And this is how they used Brandwatch to monitor, analyse and glean insights #NYKConf pic.twitter.com/gXXtjjlRSV

11.33am – Social Intelligence Revolution in the Media Industry

Next up in Room 1 we have a really interesting customer story from Fox.

You can watch along on the Periscope stream here:

Ryan’s team started the project by looking at Twitter handles, along with key phrases that suggest people want to switch. Then we also looked at words and phrases solely talking about switching, without brands.

The methodology is pretty technical so I’m not going to try and type it all here. I’ll live in hope that someone tweets a pic of the slide and I can embed it.

Rules and categories were used to segment the data we got back from the Boolean searches.

The largest theme that emerged was, perhaps unsurprisingly, around customer service. People love moaning about their phone providers on Twitter! Lots of ‘choice’ language shall we say.

Customer service was mentioned in 1 in 4 of all ‘switching provider’ conversations. If you are a mobile provider online, perhaps talk about how great your customer service is! People love that.

Next up we’re talking about switching mobile providers. And I’ve switched rooms! And I’ve taken some codeine so things might get weird.

Choices choices it's all about choices… great program and great conference of @Brandwatch #NYKCONF pic.twitter.com/Zy8EJx1JVm

We’ll be listening to Ryan Harrison from the Berlin Brandwatch office tell us about research his team undertook on people who are potentially switching mobile providers.

What can we learn about why people want to switch? Ryan’s going to break it all down and offer actionable tips.

Peter Fairfax is on stage telling us about some cool work we did for a bank.

The bank wanted to identify first time buyers, so they could learn about them and discover potential marketing opportunities.

The researchers used Audiences to use Boolean in a number of creative ways to find and isolate first time buyers; by looking at people who self identified, as well as finding the other ways buying a home is talked about.

One of the actionable insights we discovered was that first time buyers are much more positive and excited about the home-purchasing process than the general buyer group – people who have bought more than one home are more negative and worried about the process. 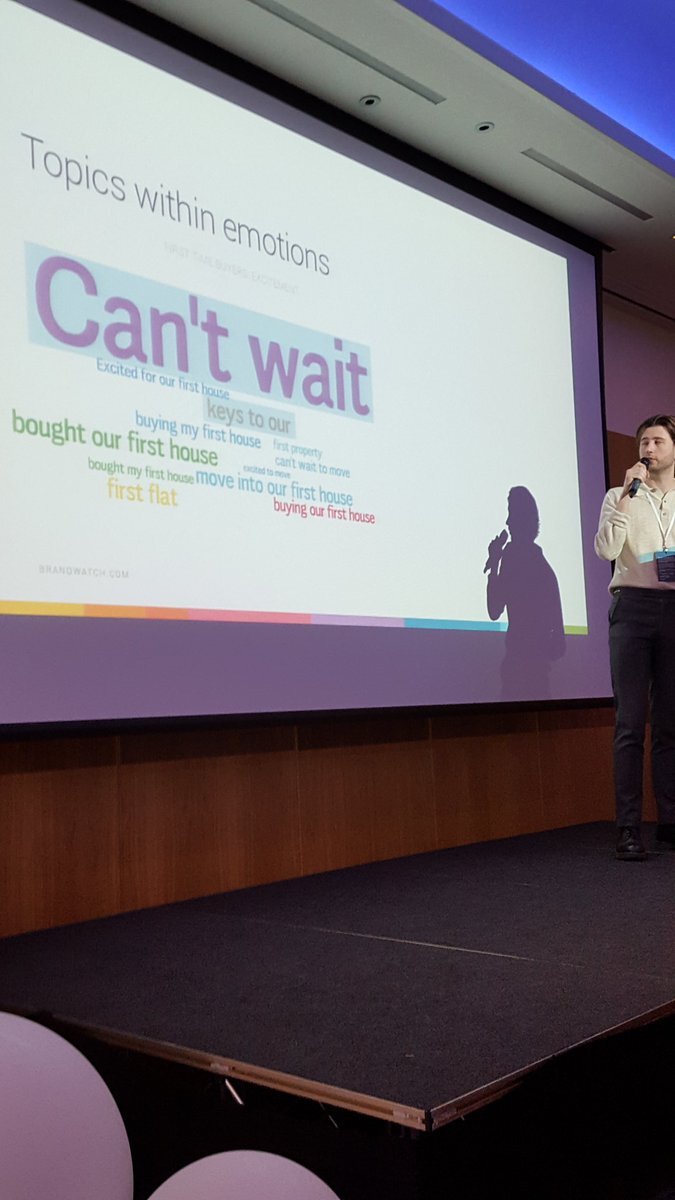 When marketing to first time buyers the bank could use campaigns that tap into the excitement. We’ve also learned that first-time buyers are far more concise than general buyers.

The talk has covered the launch of the Viceland TV channel, and the audiences work our analysts did.

Vice Media wanted to know more about their potential TV audiences, so we uncovered a number of insights that helped them with the launch strategy.

Next up we have two of our Research team, Charlotte Vang and Peter Fairfax, giving us a talk on some work we recently did for the launch of the Viceland TV channel.

09.45am – The Value of Audience Segmentation in Social Listening

Emelie has been covering the evolution of social listening – from simple listening for volume and share of voice, to sentiment, to sentiment drivers, and then understanding the thematic categories within the data.

Now, we have reached a point where we can segment by author.

‘From looking at me, to my competition, to my category, and now to my consumers – this is the journey we’ve gone through.’

Social lends itself very well to being a complementary layer of research – we have a good cross section of society represented on social. We also have access to everything a target has ever written on social, and it is easy to slice and dice the data. We can also go back and re-analyze the data.

Of course there are some downfalls, as Paul Siegel (yes! He’s back!) will be covering later on today. Emelie has also covered how there are new ways of gleaning insights from social data.

Drilling down into how insights and behaviors can be gleaned from different audience groups #NYKConf pic.twitter.com/bKm5PTph0z

The evolution of social listening, summed up by @Emelie_SW . Although now I've got Fatboy Slim's Right Here Right Now in my head ? #NYKConf

09.30am – The Value of Audience Segmentation in Social Listening

Emelie Swerre is Research Manager EMEA here at Brandwatch, and for today’s first session she’s going to be tickling our brains on how segmenting your audiences can reveal a wealth of opportunities.

Social listening has evolved greatly over the past few years. Having started primarily as a brand tracking tool, social data is now being used more to its full potential as a platform for understanding consumers in rich, unprompted detail. In this keynote, our Research Manager for EMEA will demonstrate the value of using social listening for consumer insight, in particular understanding the role that audience segmentation can play in CMI.

Emelie’s team know everything you could ever want to know about extracting insights from social data.

We’re all in the main room today for our welcome by EVP Customer Success, Pat Phelan. There are t-shirts on the chairs! More swag! Guys, there is NO expense spared here, I’m telling you. Also I’ve had two massive Starbucks so this could get erratic.

Track one is ‘Doing More with Social’ and track two is ‘Social CMI’ – I’ll be sat in the Social CMI track for most of the day. Here’s what we’ll be watching: 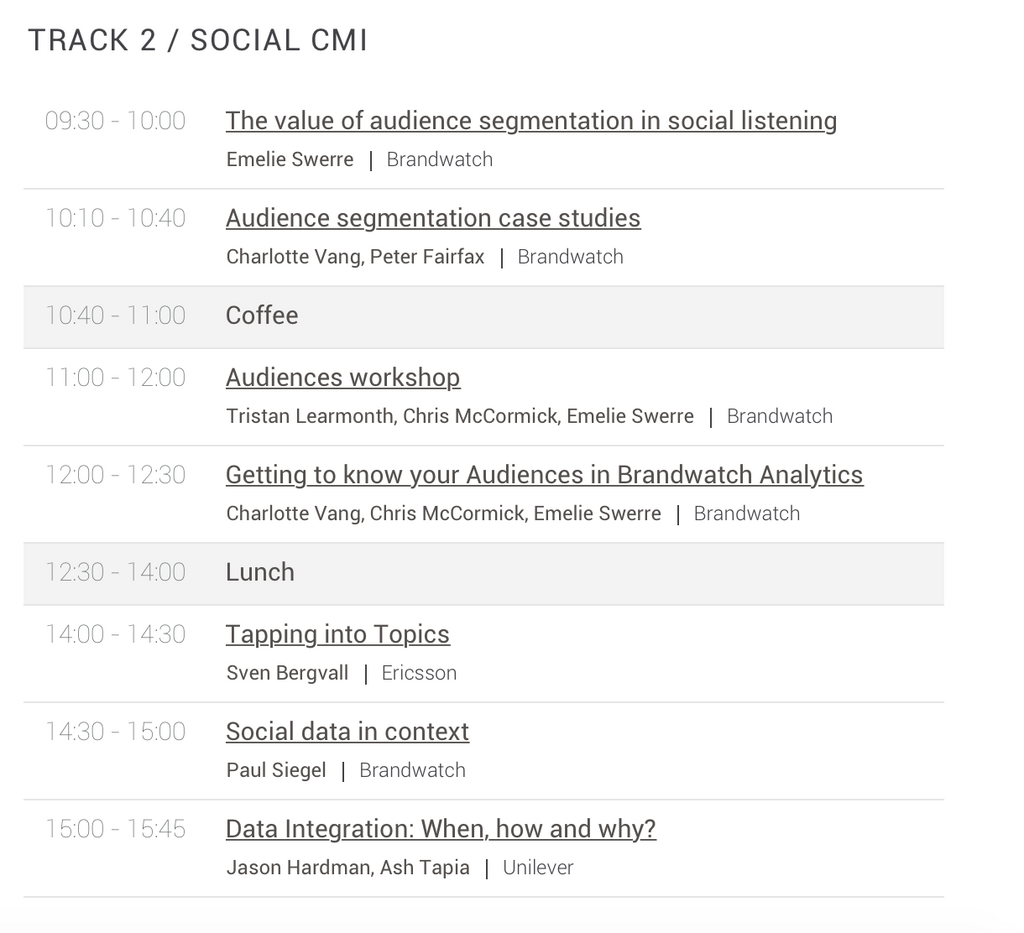 Looks like everyone is excited (and there appear to be some sore heads).

Lots of hungover faces this morning.. so glad I didn't go out last night! #TooOld #NYKConf