Have We Reached Peak Unicorn?

Was 2017 the peak for unicorns? We take a look at the data behind the unicorn trend from makeup to Starbucks to fashion. Grab some glitter and settle in to find out what we found

2017 was the year of the unicorn: starting in January, the uptick in search interest held steady, before exploding towards the end of the year.

But every action has an equal and opposite reaction, and by the end of the year numerous media outlets were predicting the end of unicorn everything.

So the question is, are we at peak unicorn or will we still be hearing the patter of glittery hooves into 2018?

I dug into Twitter and Instagram data from the UK and US, collected using Brandwatch Analytics, to see what is going on.

What does the volume of conversations around unicorns look like throughout 2017? 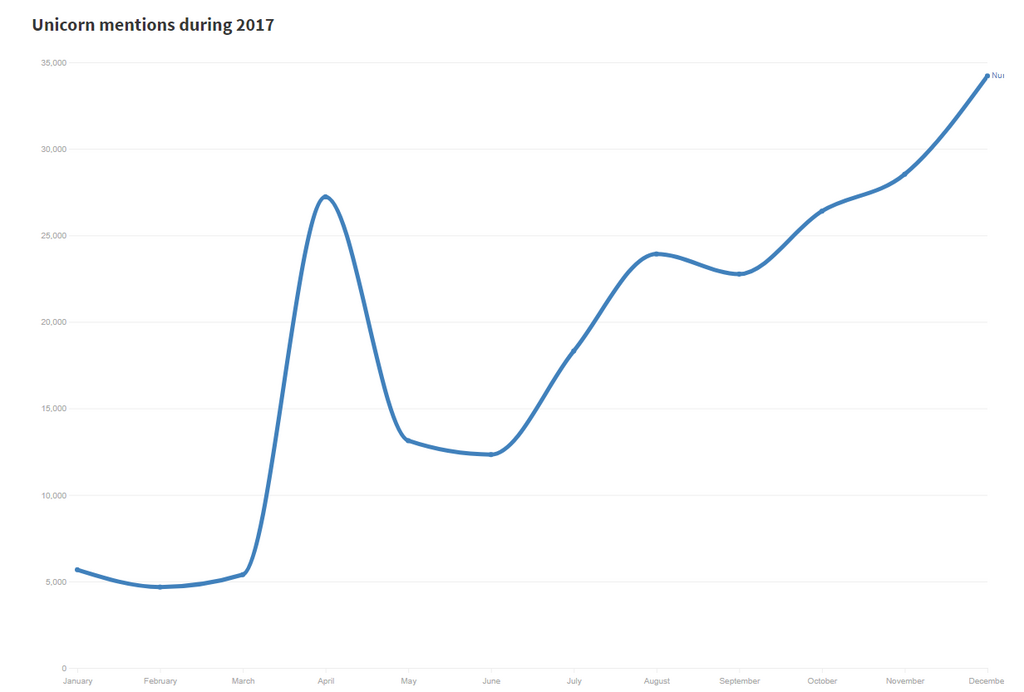 That unicorn-horn spike in April was a result of Starbucks launching their Unicorn Frappuccino.

Although interest plunged afterwards, from July a steady combination of other trends created upwards lift that saw an increase of just over 500% more unicorn-related social statuses in December than in January.

But are people over unicorns already?

Just because people are talking about unicorns doesn’t mean they love them — what if that rise in conversations was driven by people discussing how goddamn sick they are of seeing unicorn everything?

How social sentiment around unicorns changed during 2017

Looking at the breakdown of positive, negative and neutral sentiment shows that yes, there is more negative discussion around our favorite horned quadrupeds.

But even as it’s increased in volume, negative conversations have decreased in proportion suggesting that people are getting more rather than less enthusiastic.

What gets people talking about unicorns?

If you thought that your entire social media feeds were taken over by Starbucks’ oh-so-grammable unicorn frappucino in the summer, then you were right.

This created by far the biggest single topic trend, and let’s hope the person who thought up this product idea got a big raise.

After sickly beverages, making yourself over to look more unicorn is a strong trend, with hair and make-up being the second and third most popular. After all, why just wear a unicorn top when you can be the unicorn you want to see in the world.

Another sizable chunk of conversation comes from Harry Potter related discussion — anyone else jealous of those who got a unicorn as a patronus on the Pottermore quiz? But the majority of these came from a single viral tweet in December, from the British Museum:

Here's my favourite blogpost from 2017, for our exhibition, Harry Potter: A History of Magic

But what did people really love?

Top themes broken down by sentiment and % share of voice

Not the unicorn frappucino, apparently with a particularly memorable headline from The Washington Post getting a good bit of traction on Twitter:

Best headline of the day: @Starbucks Unicorn Frappuccino tastes like shame, by WashPo.

This post had me worried for any kids celebrating their birthday party in Philadelphia:

But when we look at the actuals rather than percentage share of voice it looks like the frap was still a pretty good PR stunt:

It turns out that people really, really love unicorn make-up, hair and cake — it’s all about living your best unicorn life out loud on Instagram.

At least until the diabetes sets in, and your hair starts falling out from over-bleaching.

Wondering about the politics mention in there? Sadly there is no unicorn party (though tbh if it did exist it might be strong contender for my vote), just unicorns being used as a disparaging term for opposing politicians.

After a strong climb in the summer, interest in the three consistent themes that drive volumes of unicorn conversation dropped off towards the end of the year. While that might just be a seasonal trend as everyone switched to reindeer and snowman mode, the unicorn hair and make-up trends definitely look to be dropping off.

It looks like spring is ripe for the next unicorn trend to snatch those social media mentions.

Are we at peak unicorn? The answer might be yes — but the good news is that unicorns aficionados will likely still be able to get their fix through 2018.