It’s coming up to the end of the year, which means it’s time for our annual ranking of the most influential people on Twitter.

Every year, as the weather gets colder, the Brandwatch React team start to get this strange feeling.

Is it the craving for the warmth of the Christmas fire? The hunger for a hearty Thanksgiving feast? No, it’s our itch to work out which tweeter is the most influential this year.

We’ve created this list (in various forms) for four years now. Here’s how we do it.

For this research we used Brandwatch Audiences to search for active tweeters with a high influence score.

Audiences ranks accounts according to a selection of criteria that, added together, create their influence score.

This is our measure of how influential an account is over time, based on the level of genuine engagement they are creating. While lots of followers, retweets and replies will help, the more influential the people they engage with, the better the score.

First of all, musicians seem particularly adept at becoming influential on the platform.

Brandwatch's top 50 most influential tweeters: What are they known for? 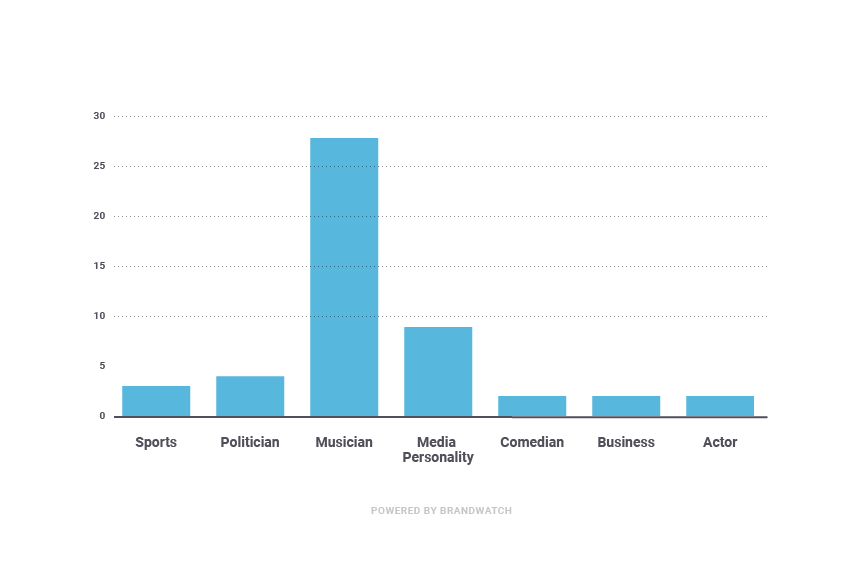 We were surprised to see just four politicians on the list. Those that were on the list appeared very highly, though, with Trump, Modi, and Obama appearing in the top 10.

There is a massive range of ages in the list, from Justin Bieber and Harry Styles (both 25 years old) up to 73-year-old President Trump. The average age overall is 41.

Thanks for reading this year’s report on the most influential people on Twitter. Remember, big-name influencers can definitely help with broad brand awareness, but it’s also important to look at the power of micro influencers – the people with smaller but very engaged followings that might be more likely to care about what your brand has to say.

Finding the right influencer for your brand or client can be difficult. Here’s how to make things easier..