Adblock usage is on the rise. Brandwatch analyzes the online conversations surrounding the internet's love/hate relationship with adblockers.

It is virtually impossible to visit a webpage without seeing an ad in some format or another. Somewhere, at some point, the internet had enough and it was then that adblock technology was born.

Adblocking is a pretty hot topic at the minute, so we wanted to dive into the social data to gain an understanding of the current landscape.

We collected two months worth of data and found 114,000 mentions of adblock or adblock technology. Of that, 96% occurred on Twitter while Reddit was next in line with 1% of the total conversation.

You more than likely know where these conversations take place, so let’s dig deeper into the who, what, when and where of the adblock discussion on social.

The conversation around adblockers is skewed heavily toward the male audience – only 25% of mentions came from women.

This is interesting, as the issue affects people across the board but only a small fraction of women air their opinions on the subject.

Within the male conversation Forbes was one of the most mentioned terms, but more about that later. 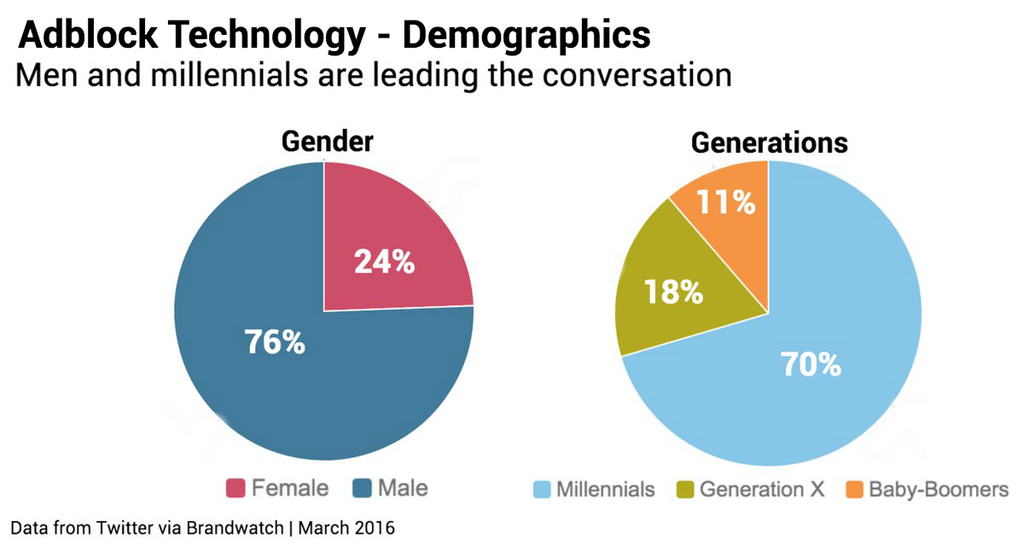 It will come as no shock that millennials speak the most about adblockers online – the proportions vary month to month but they maintain a majority nonetheless.

It should be noted that this analysis is based on a sample of tweeters that include generational data in their bio, so take it with a pinch of salt!

Drilling down into professions, executives hold the majority share of voice at 23%.

Aside from this, software developers and IT workers (17%), artists (16%) and sales/marketing/PR professionals (14%) were the top professions discussing adblockers online.

The US has contributed over 70,000 mentions to the global conversation over the measured time period.

Regional data can often be skewed by the sheer number of digital publishers that are based in the US and the fact that 84% of the 245 million adults in the United States use the internet, a higher portion than in many other countries.

Bearing that in mind, if you take a look at the numbers it’s even more clear that adblock technology is a big concern across the globe. 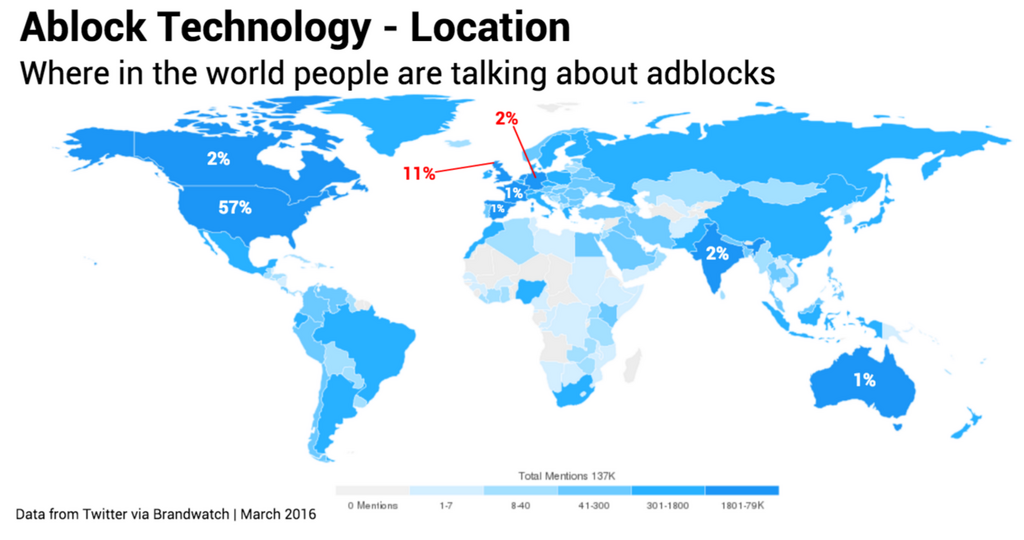 In order to gain a more thorough understanding of the adblock sphere and how it affects people, it’s useful to take into account when the conversation takes place.

We found that the conversation peaks during the working day, especially between 9am and 1pm. The times with the most negative tweets were 8am and 9pm, both at 74% negative. 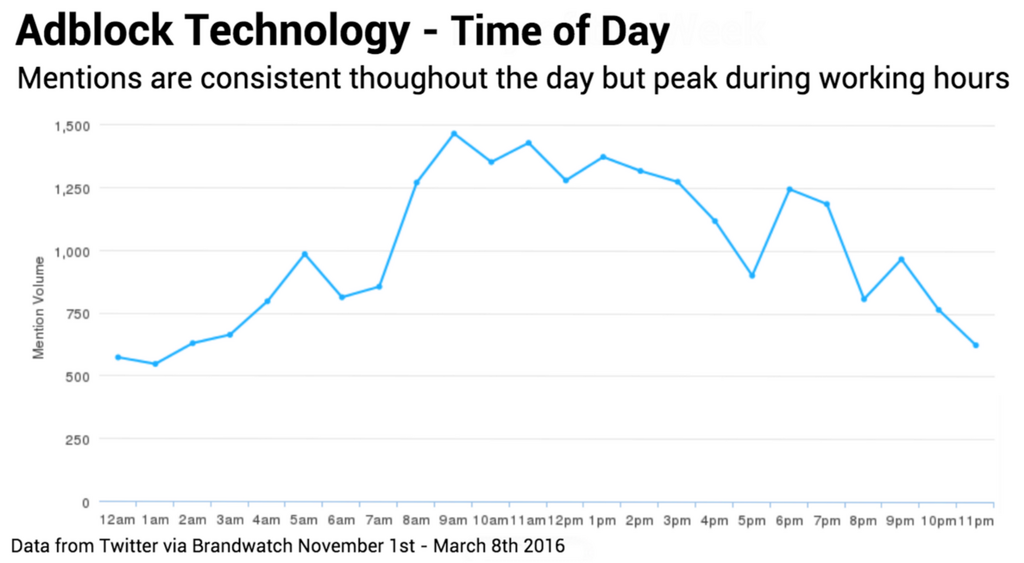 Looking at the day of the week we can see that the conversation is strongest on traditional working days, peaking on Tuesdays and Wednesdays and dropping off at the weekend. 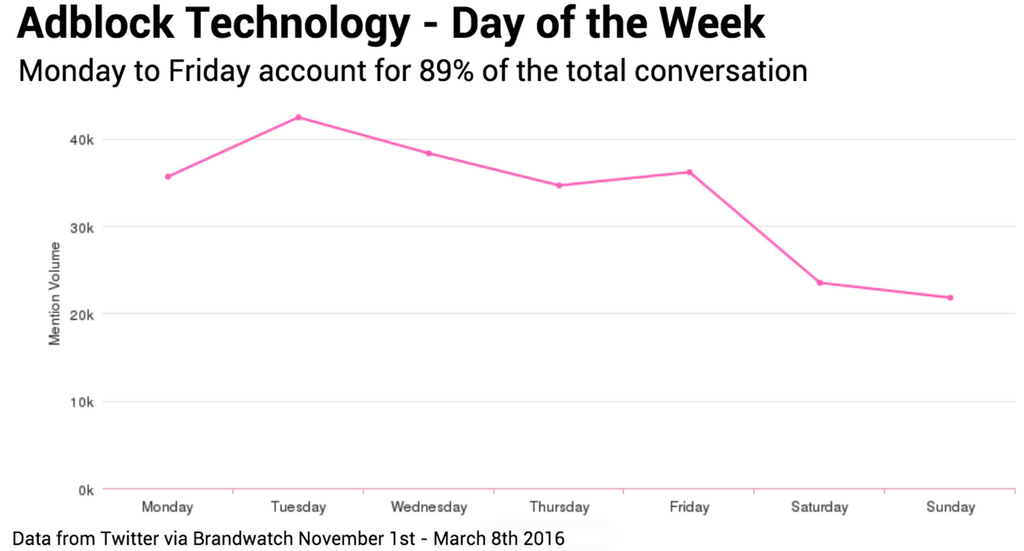 Taking both these charts into consideration it’s safe to assume the majority of people either vent their adblocking frustrations, ask for recommendations, or speak about installing adblock tech during the working day.

This is understandable due to the amount of paywalls and autoplay ads one encounters on an average day which can be frustrating if you’re looking for information quickly for your work.

If you have reached breaking point and have been driven to installing adblock technology there are countless options available to you.

The two most discussed adblock plugins during the period we tracked were AdBlock Plus and AdBlock Fast.

AdBlock Plus dominated with 81% of the conversation between the two plugins.

The battle between digital publishers and adblock software providers rages on with neither coming out as a clear winner.

Adblock technology is being admonished for reducing revenue on publishing sites while those who use the technology are being questioned on their right to access free content.

On the other hand publishers get complaints for restricting viewers through paywalls. One of the most notable of these sites is Forbes.com which cropped up frequently in our analysis.

Of all the associated topics, Forbes was number four on the list, receiving over 6,000 mentions. Of these, 69% were categorized as negative.

Turned off adblocker to read a @Forbes article. There are 65 trackers loaded with the page. WTF! Guess won’t be reading Forbes anymore.

Forbes’ call for people to turn off adblockers in order to view the site’s content is understandable, especially seeing as adblock tech will contribute to an overall loss of a over $20 billion this year.

But with the increasing popularity of adblock tech, the long term damage it is afflicting is worrying for many.

I’m keeping my #AdBlock on and moving someplace else for the same information, #Forbes. No thank you.

The future of adblocking is an uncertain one, but we’ll certainly be keeping an eye on how it develops.