React: All the Data on What You’re Thankful for This Thanksgiving

It’s that time of year again – decorations have begun to adorn shopfronts, there’s a definite chill in the air and everyone is trying desperately to get on the ‘nice’ list.

The first course of this holiday season is Thanksgiving.

While this holiday is celebrated predominantly in the US, many people around the world have started adopting the traditions, and even some people out of this world.

Here at Brandwatch we like data (if you hadn’t guessed), and we like Thanksgiving so we decided to marry the two. A match made in heaven really, like mashed potatoes and gravy.

The message at this time of year is clear – take time to realize all that is good in life and take time to appreciate it.

So, on that note, we took the common phrase “I’m Thankful for ___” and plugged it into Brandwatch Analytics to determine the most commonly used phrases. 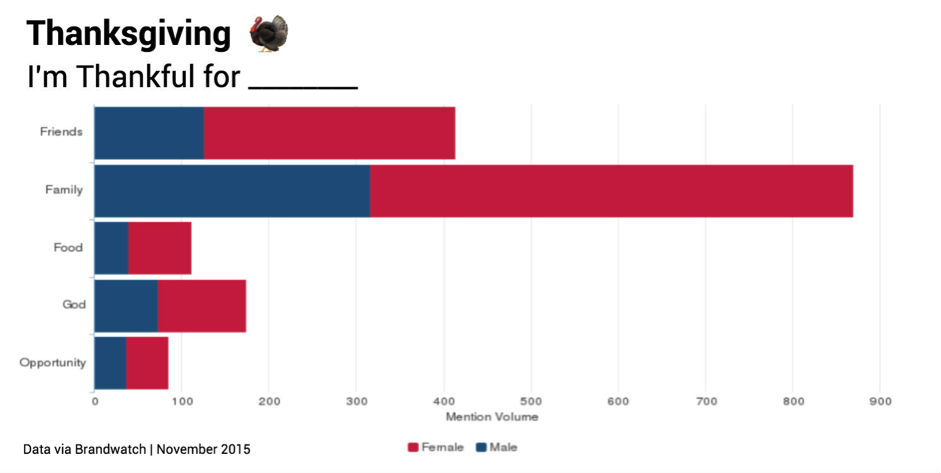 The results are comforting. With everything that is wrong with the world, it is nice to see that things like family and friends still mean the most to people, and they’re not afraid to say it.

Family received over 2,000 mentions over the past seven days.

Additionally, women outnumbered men on every giving of thanks.

We also investigated some of the less traditional phrases; pizza and Netflix featured greatly, oftentimes in the same mention.

As the week went on, people became more and more thankful for their pets and less thankful for coffee, although we think Monday might have had something to do with the proportion of coffee mentions. 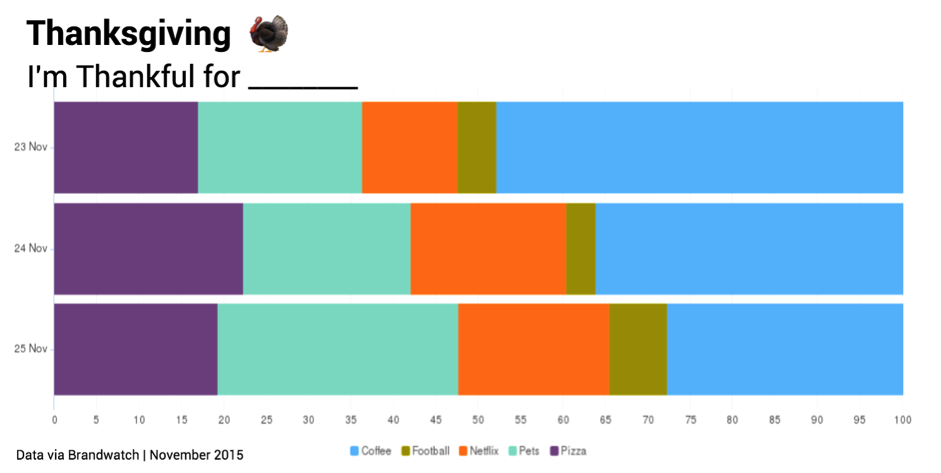 Unsurprisingly the majority of talk around Thanksgiving was centered around food and the bountiful spread that many would enjoy on the day.

As football and Black Friday are both big themes during this week, we decided to see where people were talking about this topics and in what proportion. 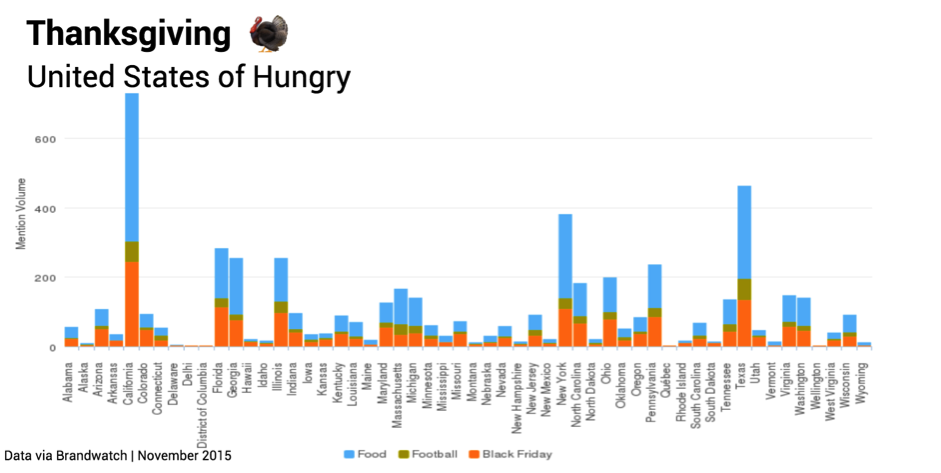 Californians clearly cannot wait for their Thanksgiving dinner, and at the same time people in Wyoming couldn’t care less about Black Friday.

Overall, food accounted for 60% of the conversation.

I’m getting so excited for thanksgiving! Can’t wait to fix up the table all beautiful with some amazing good food. pic.twitter.com/ACpdSXaV6D

We imagine that the volume of mentions for football will soar during the games.

Each year The White House pardons a turkey and spares it from the inevitable fate of so many others.

This tradition however begins and ends in The White House, as millions of Turkeys (46 million in fact) are eaten every year on Thanksgiving.

Fun fact: Benjamin Franklin wanted the national bird to be a turkey. 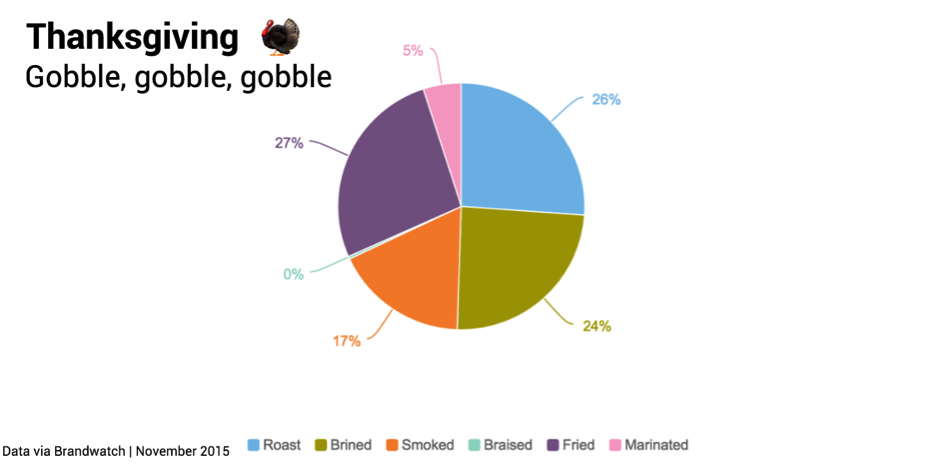 As evident from the chart above, brined, roasted and fried are the three most talked about methods of preparation and cooking. Word of warning; be careful when frying that turkey.

The last thing you want is a house fire in between the appetizers and entree.

How to deep fry a turkey without having to call the fire department https://t.co/zO4O2SWpEZ pic.twitter.com/l66bt3pq5T — New River News (@newrivernews) November 24, 2015

This analysis was carried out in the days leading up to Thanksgiving so we predict that the mentions for Black Friday are going to increase incrementally as time goes on.

In the meantime, surround yourself with family and/or friends and dig in.