Following Suit: What Do Those Outside of the UK Think Of Brexit?

In the latest of the Brexit data blog series, the Brandwatch React team explore conversations surrounding Brexit coming from outside of the UK.

Welcome to the second in our series of data explorations of the Brexit conversation.

Why measure what people outside of the UK are saying?

The consequences of the United Kingdom leaving the EU stretch well beyond the English channel, and hearing from voices outside of the UK can offer an interesting dimension to the conversation.

For this research, the React team tracked English-speaking mentions of the EU Referendum coming from authors located outside of the United Kingdom.

This data offers a look at what English speaking people who live outside the UK think, as well as British people who were based in a different country at the time of tweeting.

We thought we’d start in (technically UK) Gibraltar to see what English speakers there had to say in the wake of the EU Referendum result. British citizens living in Gibraltar were able to vote in the EU Referendum, and they voted overwhelmingly to stay.

It was difficult to find a good word said about Brexit.

I just woke up and after reading the news for 30 seconds I wish I hadn't ? #EUref

The £ is at the lowest it has been against the $ since 1985. Still think you have made the right decision? Putin & Trump wanted Brexit also

Cheers majority of the UK for cocking it up for us living abroad. I hope you enjoy your inflated holiday prices and loss of E111 #Brexit

@NatalieSarantos sorry but this rings hollow after being royally screwed by #Brexit – a ref that we didn't ask for.

At the same time, 823 people in Gibraltar actually voted leave.

They have been dubbed the “turkeys that voted for Christmas” by some. These 823 leave voters caused Gibraltar to trend in the wake of the result as people puzzled over why they came to that decision.

Using location filters and our geo-tagged map to zoom in on Gibraltar was useful for finding the views of British citizens living there, and using this method helped us find other Brits living abroad and their concerns.

Finding tweets from British people residing in different EU nations was a little tricky, but we found a few.

Their concerns about being able to stay where they are residing are yet to be fully addressed, much like those who originate from other EU countries currently residing in the UK.

#Brexit (fucking hate that word) but what does it mean for me living in #Spain and wanting to remain living here? #EURefResults ?

The United Kingdom has gone down in many people’s estimations, and a recent study showed that Brexit had negatively affected the “overall attractiveness” of the UK.

Quantifying that kind of sentiment towards the UK using social data presents some difficulties (although in a broader study I’d estimate that valuable insights could be gleaned), but we did find some anecdotal evidence of people talking about the UK negatively in tweets coming from outside of the UK.

#Brexit I'm (sort of) one of the older generation, and I'm totally mortified!! The UK has just become a less tolerant and inclusive place

#Brexit reeks of pure #bigotry. The abuse of foreigners in UK has become more brazen within these 48hrs alone. #prayforhumanity

That’s not to say that everyone outside of the UK was upset with the result, though.

We wondered whether #Brexit would impact people’s thoughts on other countries leaving the EU, and found that “Frexit” saw a huge jump on the day of the result. 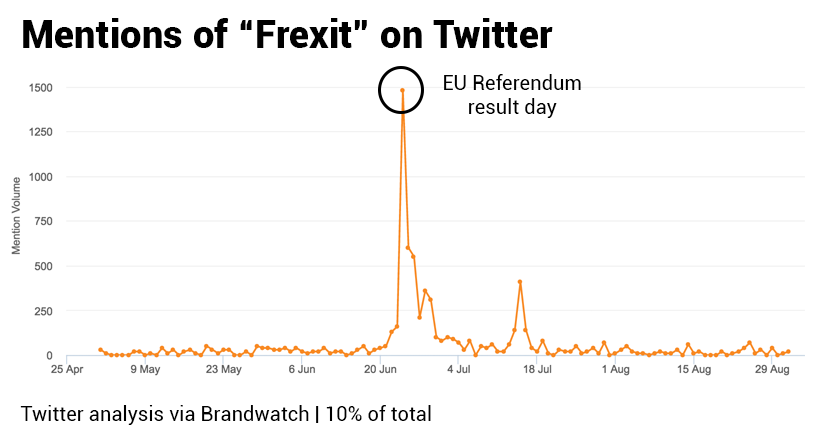 Of course, these social media mentions don’t indicate that people in other countries are going to be more inclined to leave the EU, but Brexit is definitely enough to start conversations.

The post-Brexit conversation was a hot topic amongst Trump supporters, too.

The BRITS just said a resounding FU to Globalists and our turn is next!!! #Trump2016 #TrumpTrain #Brexit

When the US Elections finally rolled around, Brexit mentions jumped as Trump was made President-Elect.

If anything can be drawn from non-UK mentions of Brexit, it’s that it’s become a reference point for major political change, and it’ll be interesting to see how it’s used as debates surrounding other countries’ positions in the EU develop. We’ll be sure to keep an eye on the data.