React takes a look at the data behind the Cyber Monday on social, finding out who's getting the most attention and which games consoles are most popular.

Cyber Monday, the consumer tech-focused little sister to the infamous Black Friday, is upon us. But what are people shopping for this year?

After taking a look at the data surrounding Black Friday last week, the Brandwatch React team decided to examine the buzz surrounding Cyber Monday to see what insights on consumer behavior could be dug up.

Getting to grips with Cyber Monday on social media

The team gathered a 10% sample of mentions of “Cyber Monday” (or #cybermonday etc) between Friday and 6am Monday morning, finding just over 40k mentions across 80 million+ websites.

It’s not nearly as large as the 10% Black Friday sample we analyzed last week (though we were searching BF mentions over a seven-day period). The Cyber Monday hype, it seems, is not yet on par with that of Black Friday.

That said, Friday’s mentions of Cyber Monday outweighed Saturdays with many people saying they were waiting on Cyber Monday before spending.

Fuck black friday, its all about cyber monday ?

Want to shop sooo bad but waiting until cyber Monday ? the deals better be better than today !

Just like Black Friday, the hype has spread beyond the US. 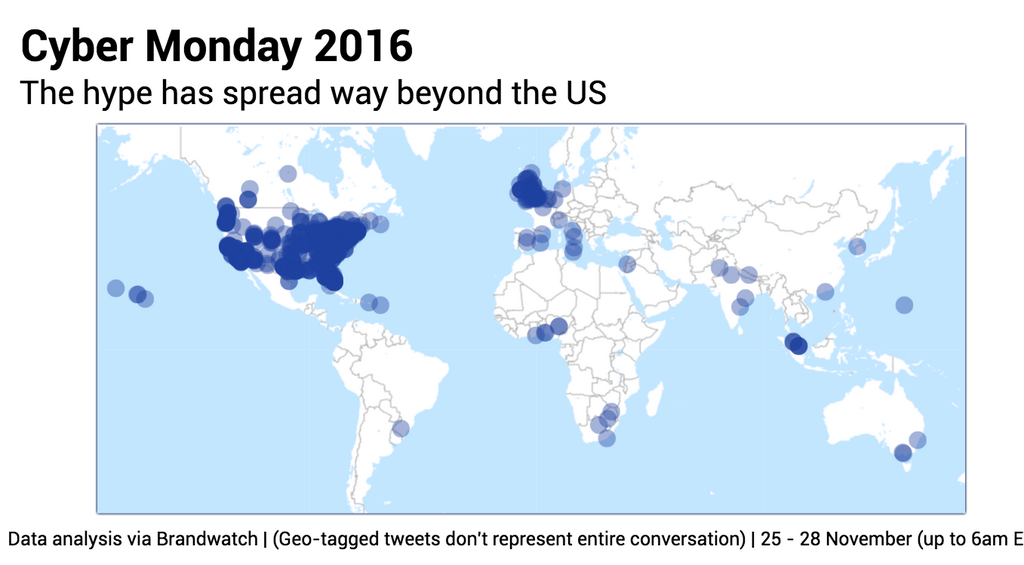 What are people talking about?

Tech certainly isn’t the only thing on sale this Cyber Monday, with hundreds of tweets related to discounts on clothing and jewelry.

Security is also a key part of the conversation, with Action Fraud UK tweeting to inform shoppers on keeping safe when buying things online.

The one and only #CyberMonday shopping list you need to avoid the dodgy deals. #TakeFive pic.twitter.com/ALRZeFbIqy

Meanwhile, much like on Black Friday, mentions of “bank account” and “I’m broke” are fairly prominent. Not everyone is paid by the 28th of the month.

all these cyber monday emails and I am BROKE ??

What are people buying?

While some people are broke, many are seeing Cyber Monday as a key opportunity to get some Christmas shopping out the way.

Finished 1/2 my #Christmas shopping before 7am.. thank you @amazon #cybermondaydeals ! #amazonprime

Among the top mentioned Twitter accounts are @KylieJenner and @TheVampsband, selling cosmetics and merchandise.

Meanwhile, @herovillaintoys, who specialise in action figures, are doing really well on the retweet front.

It’s a little odd not to find the biggest tech companies struggling to compete with celebrities and more niche accounts, but we’d expect them to be a little more prominent in the data as the USA wakes up this Cyber Monday.

Battle of the consoles

@IGN is one of the top retweeted Twitter accounts in the conversation and it’s sharing all the latest deals for games console owners. We decided to take a look at the video game conversation in more detail.

Searching for intent to purchase strings over the Black Friday/Cyber Monday weekend, we took a look at the consoles being mentioned most in regard to people talking about parting with their cash. These searches were not done on a 10% sample.

We searched for variations of PS4, Xbox One and Wii U alongside strings like “I’m getting” or “I’m tempted to buy” (etc), finding that Xbox One was just ahead. 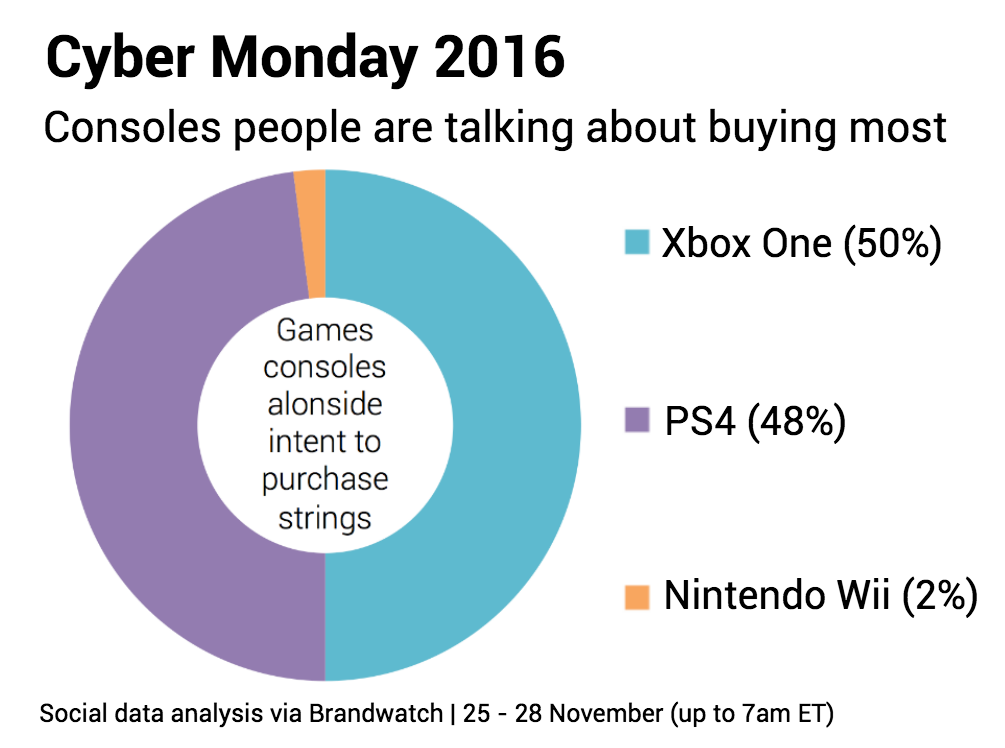 It’s a testament to just how competitive the games market is right now, especially in the run up to Christmas.

Sadly though, post-Thanksgiving deals have ruined some people’s Christmas plans…