Fantastic Beasts and Where to Find Them: The Social Data Review

The Brandwatch React team takes a look at reaction to Fantastic Beasts and Where to Find Them as well as the top-mentioned characters and actors.

Wizarding world fans around the world went a bit nuts for the release of Fantastic Beasts and Where to Find Them this weekend.

The film, written by J.K Rowling and based on a book released in 2001 that complemented the Harry Potter series, follows the story of Newt Scamander as he ventures into 1920s New York with a suitcase full of magical creatures.

It’s had quite the reception.

*This post is spoiler free, though we will discuss how much screen time some actors and characters get.*

A magical premiere glitzier than the Yule Ball

The London Premiere of the film last Tuesday certainly caught social’s attention with just under 55k online mentions of the film on the day. 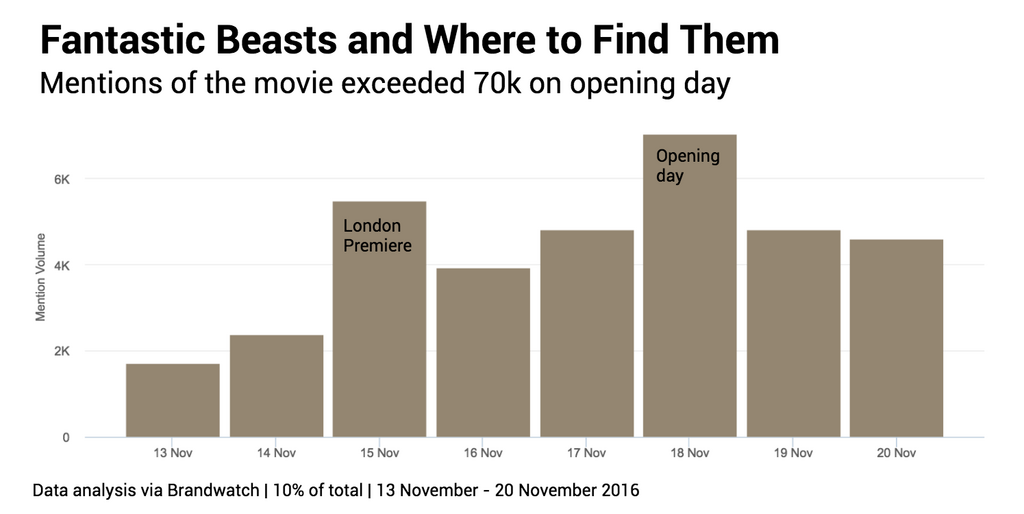 J.K Rowling was, of course, the center of attention that day although Ezra Miller who plays Credence (the boy with the tragic story and haircut to match) also made a big impact.

This tweet about his Premiere attire could have something to do with that.

Ezra Miller at the Fantastic Beasts and Where to Find Them premiere (2016) is literally a piece of walking art. pic.twitter.com/tu9MQPmvYB

We tracked mentions of the main characters over a seven-day period to see which were getting the most mentions.

Given Grindelwald’s fairly distant role in the film (he only appears for a very short time), it’s interesting to see him taking the second-most mentions.

Meanwhile, Ezra Miller’s character Credence Barebone took just 7% of the main character conversation despite the actor getting a lot more attention during the week.

Perhaps most surprising are the low volumes of mentions garnered by Porpentina Goldstein (arguably the most prominent on screen alongside Newt Scamander) and Seraphina Picquery who is President of the Magical Congress of the United States of America (MACUSA).

We searched for variations on both names (“Tina”, “MACUSA leader”, “MACUSA President” etc.) but the mentions were still unexpectedly low compared to Grindelwald’s unexpected high volume.

Taking a look at mentions of the actors who played the main characters above over the same period there are some slight differences in mention volume compared with their screen personas.

Eddie Redmayne of course takes the majority of the mentions, though Ezra Miller got a fairly large amount too. The actor has an abundance of fan pages who boosted his mentions throughout the week and his Premiere appearance would also have played into this.

Meanwhile Dan Fogler, who plays Jacob Kowalski in the film, is the third most-mentioned actor. His depiction of the loveable muggle (or “no-maj” as they call them in the US) has been praised by many.

@mrdanfogler fantastic beasts is amazing i love you

Johnny Depp’s casting in the film earned him a significant chunk of the conversation but the decision has been considered controversial.

His part in this film was fairly brief but the actor is said to be making more lengthy appearances in the coming four sequels, and J.K Rowling is reportedly “delighted” with his performance.

Sweet as butter beer or worse than a cruciatus curse?

Automatic sentiment analysis on a film with “Fantastic” in the title is a little unfair to take at face value so we used some custom rules on mentions to make a more accurate estimate on just how much social media loves the film.

We found reviews were overwhelmingly positive. There was the occasional “but”, however.

@jk_rowling I truly loved Fantastic Beasts but I have to be honest, I am genuinely disappointed to see Depp involved. He's a good actor but

I loved Fantastic Beasts but honestly Johnny Depp kinda brought it down for me ☹️ other than that, glowing reports all around

But yes! Fantastic Beasts was amazing. Johnny Depp shouldn't have been casted ?

The wizarding world continues to expand

The film has certainly reinvigorated interest in the wizarding world (that is, if it ever died down).

Pottermore, the popular site which J.K Rowling uses to add depth to the world of Harry Potter, were at the center of the action promoting the new film and had some of the most shared tweets during the week leading up to the release.

In today's #FantasticBeasts interview, we talk to the man bringing Newt Scamander to life on screen, Eddie Redmayne: https://t.co/Xbz7uqV45L pic.twitter.com/hTUwFdwpb0

J.K Rowling also reports that she has been inundated with questions prompted by the movie. There’s plenty more information to come, she says.

I'm being asked so many good questions about story & characters in #FantasticBeasts. If I can't answer, it's bc we have 4 movies to go!

With four more movies to come, and with reports of one coming out every two years, we could be waiting a while.