The Brandwatch React team has emerged bleary eyed and glittery from Glastonbury 2017 with all the data on this year's huge music festival.

Glastonbury 2017 is over, and as thousands of glitter and mud-caked, hungover revelers stumble wearily towards their bus home (many of our own colleagues included), our Brandwatch React team is feeling fresh faced and on it with some Glasto data.

Whether you’re reading this with 3% battery left on your phone on a rumbling coach next to a teenager who’s teetering dangerously over a vomit bag or from the comfort of your office, enjoy re-living this year’s stupendous Glastonbury in five social data charts.

Zooming in to mentions that were labelled as coming from Somerset, UK, we found 12,738 in that same time period. That’s a good effort from people running off dwindling phone battery and warm cider.

Saturday was the day that saw the most mentions, closely followed by Sunday. 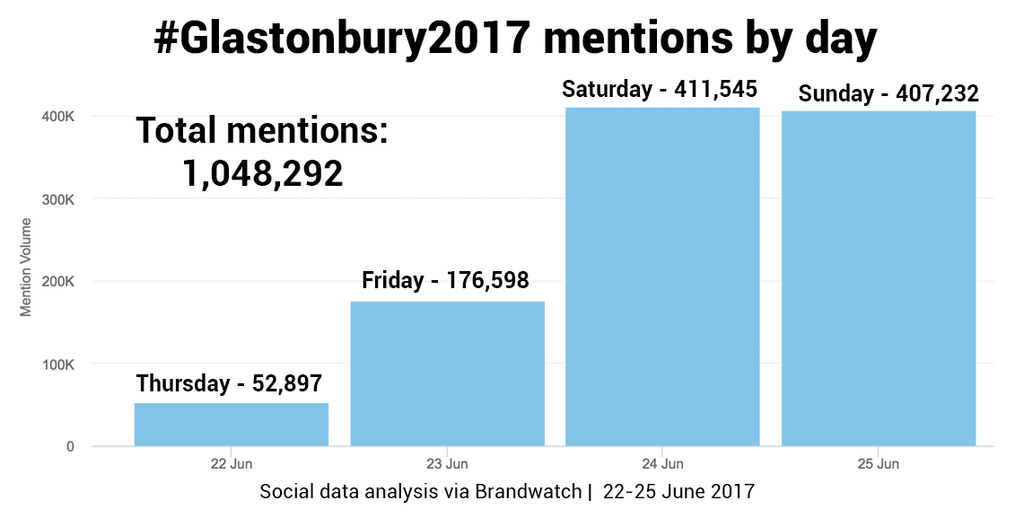 41% of gender-categorized authors were female, 59% male.

One of the most surprising things we found in the data was the prominence of Jeremy Corbyn.

He was actually mentioned in the Glastonbury conversation more than all of the actual headline acts put together, particularly after he addressed the crowd on the Pyramid Stage on Saturday afternoon. 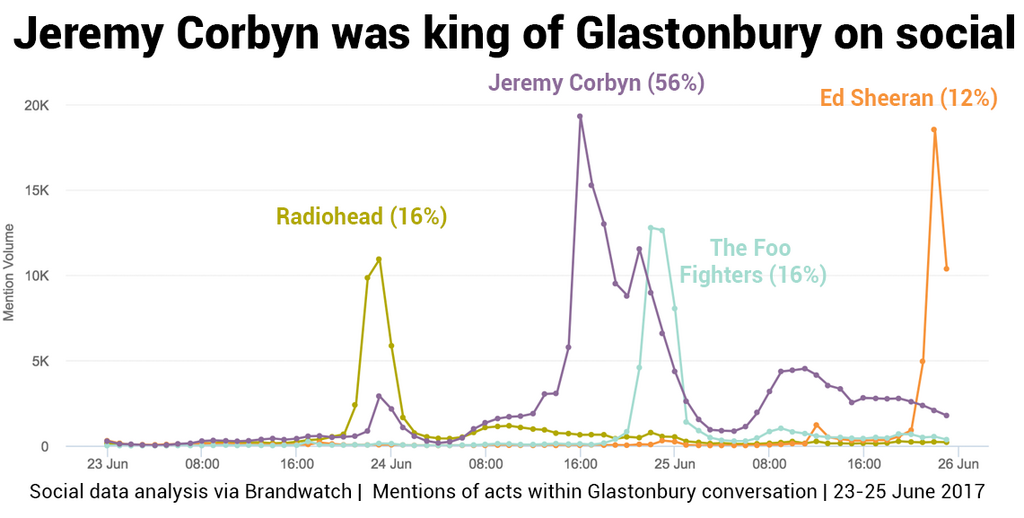 We predicted that he’d have a big impact during the festival last week when we measured him against the headliners in mentions leading up to the festival.

#Glastonbury2017: Festival-goers are getting ready for the Foo Fighters, Ed Sheeran, Radiohead and… Jeremy Corbyn pic.twitter.com/Lu069ER8jN

But mentions aren’t everything. We took a look at sentiment-categorized mentions to see which of the headliners was social’s favorite. The Foo Fighters won big time. 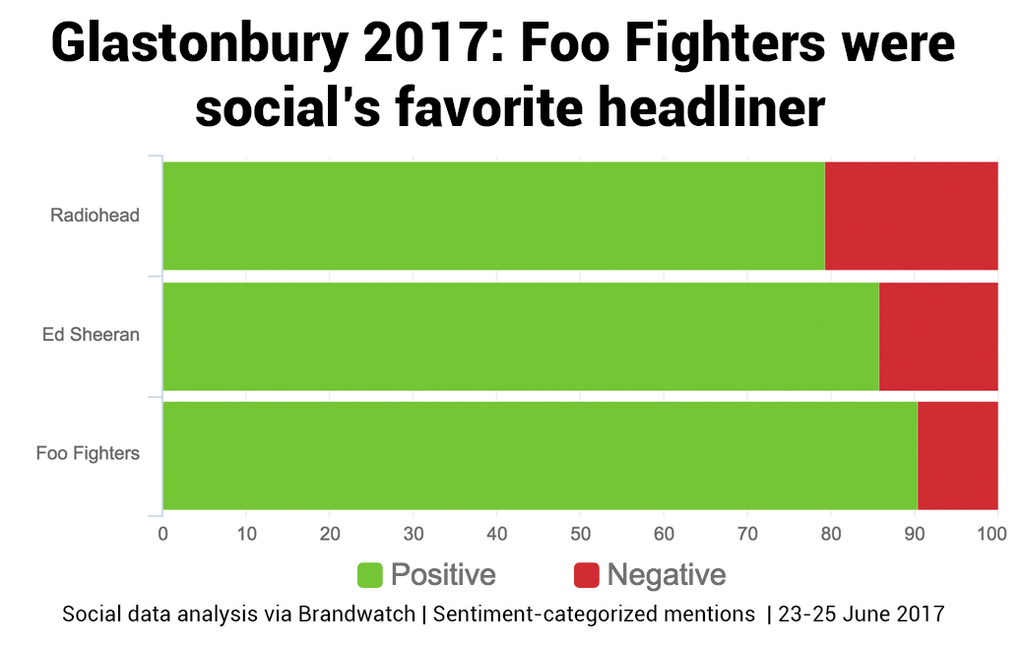 Their incredible performance, alongside some (NSFW) hilarious moments, were probably what clinched them the overwhelmingly positive reaction.

Breaking mentions down by gender reveals some interesting points. Women were far less likely to discuss Radiohead and far more likely to talk about Ed Sheeran online. Radiohead’s prominence in the conversation, as mentioned above, is a result of men out-mentioning women throughout the festival. Usually when we break down mentions by hour at a big event like Glastonbury, real-life moments are the things that cause the spikes. This is true to some extent in this case – for example, Thom Yorke of Radiohead saying “See ya later Theresa May” caused a big spike around 11pm on Friday. However, many of the spikes were driven by Jeremy Corbyn-related tweets, especially on Saturday.

Instead of using a chart, this time we’ve decided to include some notable tweets from Glastonbury.

Proud to speak at #Glastonbury – about the power we have together to build a country, and a world, #ForTheMany, not the few. pic.twitter.com/Dewk90zzZQ

only at glastonbury …. am fucking howling pic.twitter.com/9fvyVlAI8I

Glastonbury, enjoyed by tens of thousands of eco warriors, environmentalists and some anti fracking campaigners, all saving the planet. pic.twitter.com/knvB7rQd6M