Harambe Would Have Loved This Article: Analyzing a Gorilla’s Internet Legacy

Yes, apparently. The Brandwatch React team maps Harambe's posthumous social data history in an attempt to find the gorilla behind the meme.

What started as the tragic shooting of a majestic creature (to prevent a child getting harmed) has turned into a meme – perhaps the most perfect meme there is.

The incredible journey from live gorilla to controversial meme is what this article is all about. Harambe would have loved it.

Harambe’s death is often referenced alongside the death of Cecil the lion in 2015. In August we found 3k tweets mentioning both names, and the animals are often referenced together on news sites when discussing them.

While both were innocent animals killed at the hands of humans, reactions to their demises were very different.

When Cecil the lion was killed the internet’s reaction was that of unbridled anger. Mobs formed, his killer’s business was ruined and celebrities named and shamed him on their social media profiles.

To this day the man who killed him is mercilessly hunted by the press.

Cecil the lion’s death caused a huge backlash against hunting lions, one which is hoped to save the lives of other animals.

Harambe’s death was followed by a very different mourning period. Many turned to anger at the zoo keepers or guardians of the child (there were reports of death threats), but the generally accepted version of events was that of a tragic accident.

In Harambe’s case there was no obvious villain, just a highly publicized outcry from animal lovers and people lamenting those who were meant to be caring for the child.

So why did Harambe become the internet sensation he is now?

If you would have told Harambe that he was going to be an Internet sensation after he died, he wouldn’t have understood a word you said

Venkatesh Rao writes that Harambe became the perfect meme because no one stepped in to own it.

Marketers were unsure of it and the angry minorities were unable to legitimize the abuse hurled at the zookeepers and caregivers. Instead, Harambe’s internet presence became so varied and odd that it came to signify nothing in particular.

Harambe marks the emergence of something akin to a true stock market for culture, where price movements cannot always, or even often, be narrativized, either locally or globally. To be outraged by a Harambe meme—as those focused on the original conversation around animal rights and parenting continue to be—is to confuse Harambe the meme, a stock in a memetic marketplace, with Harambe the gorilla who died a tragic and pointless death.

The idea of Harambe has become something very different to Harambe’s physical presence in the world that was cut short – something that’s reflected on and laughed at in some of the Harambe content circulating the internet.

this is the only harambe meme i have lightly chortled at in months pic.twitter.com/TfXFs8wTfg

What can we learn from Harambe?

Is it OK to laugh at a dead gorilla? Hank Green asked his followers about how funny they found the meme, finding a mixed response.

I feel like the memeification of Harambe is an example of how humor is (for some) funnier if tinged with cruelty. Is that not it?

Green’s ethical concerns surrounding the meme are not shared by everyone, and the wide breadth of reactions to Harambe memes speak to the variety of ways in which he has been immortalized on the internet.

Aside from the more lurid Harambe memes that you can experience here, many tweet about the gorilla like an old friend who passed away (with a heavy dose of irony, of course).

Whenever there’s a big event you’re more than likely to find someone tweeting about how much Harambe would have enjoyed it. We took a look at mentions of “Harambe would have/would’ve loved” over the last couple of months, removing spam, to identify some of the top mentioned events. Ironically, it is Harambe memes that Harambe would have loved the most. 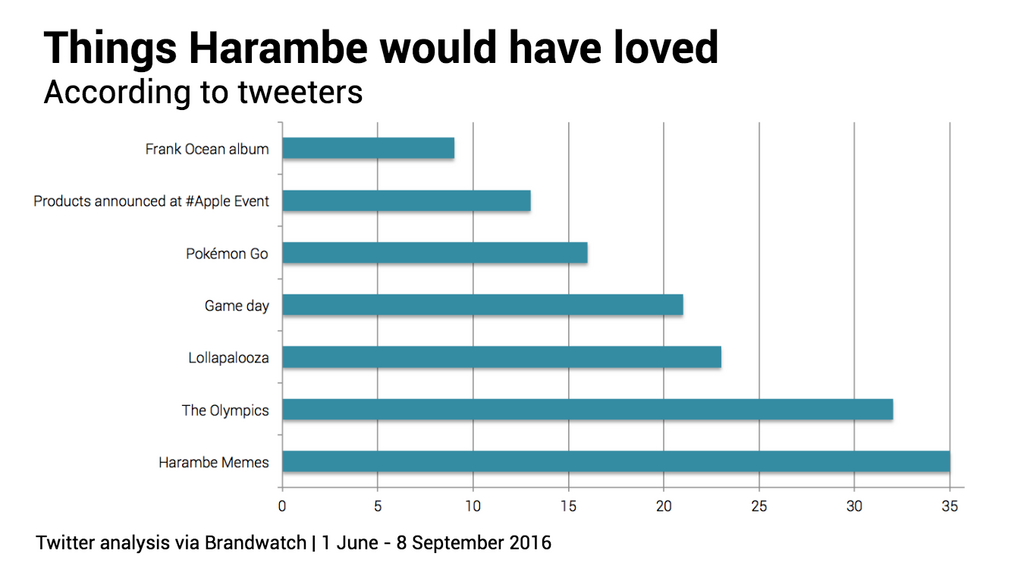 What Harambe teaches us is about transformation and legacy in a digital age and the intensely weird reactions the internet has to random events.

Harambe the gorilla has transcended his lowly origins as some random zoo gorilla. In his afterlife, he has become a superhero, a mega-meme, the internet’s gorilla.

When we were searching for a header image to this article we struggled to find a stock photo of Harambe. “Can’t we just use any old gorilla?” asked one member of the team.

In life Harambe was a gorilla but he wasn't "just a gorilla". He was a hero, a martyr. And in death he has become a legend.

Harambe wasn't "just a gorilla". He was our gorilla and he died for us.

Harambe wasn't just a gorilla, he was the glue that held this country together. https://t.co/9HzdzPOcQm

Perhaps a few months ago Harambe was like any old gorilla, but that’s not what Harambe is now.