React: #HistoryMade and the State of the Presidential Race on Social

Brandwatch takes a look at the social data surrounding the US Presidential Candidates as Hillary Clinton takes the Democratic Nomination. #HistoryMade

The events of this week have changed the game for the remaining 2016 presidential candidates.

Even though three candidates remain committed to their campaigns only Hillary Clinton and Donald Trump will (presumably) carry the torch all the way to the vote on November 8th.

History was made this week when Hillary Clinton secured the Democratic Nomination, the first ever woman to do so in the history of the United States.

Clinton drove massive conversation on Tuesday as she seized the nomination, 619,270 mentions in total, but despite this Trump was the most talked about candidate of the night with 636,040 social mentions. In the weeks preceding the the June 7th primaries Bernie Sanders ramped up campaign efforts in California in the hope of securing victory against Clinton in the golden state and the results were close but not enough.

#ThankyouBernie started trending in the early hours of Wednesday morning.

#ThankYouBernie for proving that a true progressive agenda just needs to get a bit of media coverage to catch on like wildfire.

The hashtag was used over 112,000 times with a female majority. 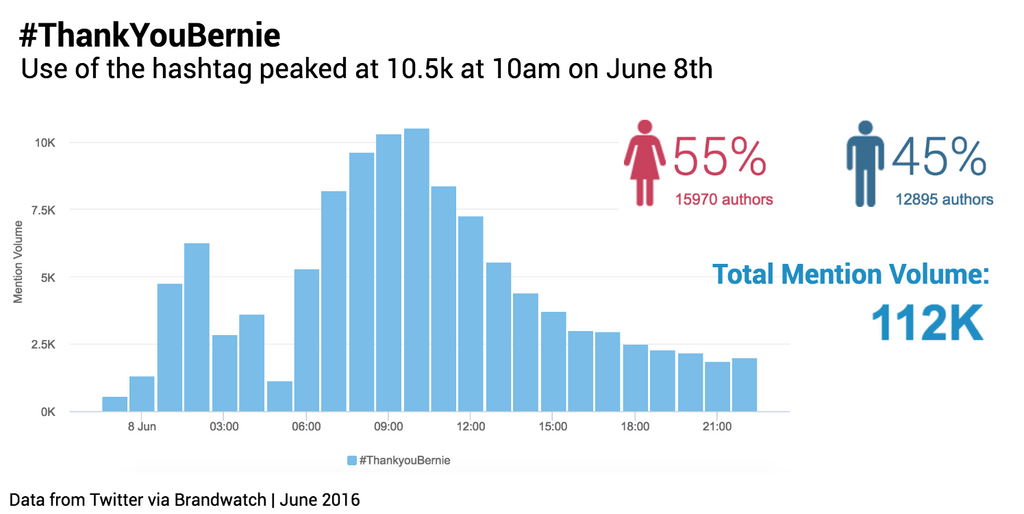 When it comes to social media both candidates have a strong presence and loyal following but Donald Trump definitely wins with over 2 million more followers than Hillary Clinton.

The road ahead won’t be easy for either of the nominees. Both have been trailed by controversy throughout the entire race and that shows no sign of letting up.

Our Election 2016 data viz shows the social sentiment for each of the candidates since the very first Republican Debate and everything in between.

The specifics of each candidate’s campaign will become more important than ever in the upcoming months. We looked at the past 3 months of social data to determine what topics social media have been discussing in relation Clinton and Trump. Unsurprisingly, 22% of conversation surrounding Donald Trump is related to immigration. Foreign policy accounts for the majority of the conversation, exactly 35% for both candidates.

Celebrity endorsements been commonplace in this race. Many came out in full support of Clinton on Tuesday, including Katy Perry who’s account has more Twitter followers than anyone else in the world:

I’ve never been prouder to have a woman card. @HillaryClinton

A lot of little girls are in bed right now dreaming for the first time, without limits. You broke the mold @HillaryClinton ??

@realDonaldTrump has been a great friend for many years. We don’t need another politician, we need a businessman like Mr. Trump! Trump 2016

HELLO BOYS! this is my formal endorsement of @realDonaldTrump & I’m a woman! (last I checked) And Rudy, U R amazing! https://t.co/0IrenUh8fa

dear
O. Wilson
they took ur comment
out of context!
I’m honored!
thank u!
If Trump will hv me
I’d be his VP
in a heartbeat!
©#TrumpSheen16

Stay up to date with all the action with our Election 2016 data viz and be sure to follow us on Twitter @BW_React for your daily dose of data.