Brandwatch looks at Cards Against Humanity's incredible rise to fame

How did a game which pokes fun at poverty and mass killings achieve worldwide fame?

With hundreds of households fighting for the most outrageous answers to seemingly innocent questions, we took the time to dive into the data to find out what clinched Cards Against Humanity the top spot for games on Amazon’s Best Seller List.

The world of tabletop games has made a comeback in a monumental way thanks to a spectacularly crude take on the common card game that has exploded in popularity.

Not only is Cards Against Humanity the perfect accompaniment to your drunken house party, it’s now a favorite activity at Christmas.

Gone are the days of Buckaroo and Cluedo, and in are the holidays filled with guilty laughter. The crude, the random and the hilarious have finally triumphed over the usual tipples of whisky and drunk-uncle dancing.

With huge peaks in mentions on Christmas Day we can confidently say that, among social media, Cards Against Humanity was a big hit. 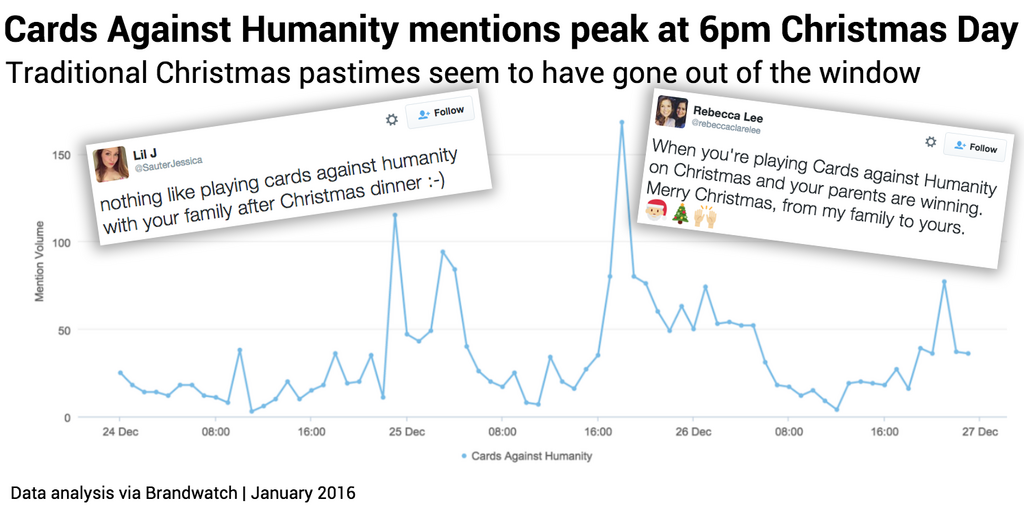 From Christmas Eve through to Boxing Day (the holiday in the UK on the 26th December), Cards Against Humanity replaced roasting chestnuts as an after-dinner activity last year.

With mention spikes in the morning suggesting the cards were a hot Christmas gift, the fun really started after bellies were filled with turkey around 4pm.

The level of social media activity on Christmas Day 2015 is the reward of years of product tweaking and marketing efforts.

Not so hot off the press

It may be ridiculously popular now, but Cards Against Humanity was not the overnight success that many had predicted.

After a bout of online crowdsourcing through website Kickstarter, the game concept was brought to fruition and officially released all the way back in 2011.

Four years after its initial release, Cards Against Humanity has rocketed in popularity, becoming a regular fixture on the board game shelf. It’s been a long ride to the levels of success and fame it now enjoys.

While the release of expansion packs have kept seasoned players interested, CAH’s innovative and controversial marketing strategy has taken every opportunity to shock and surprise new audiences. 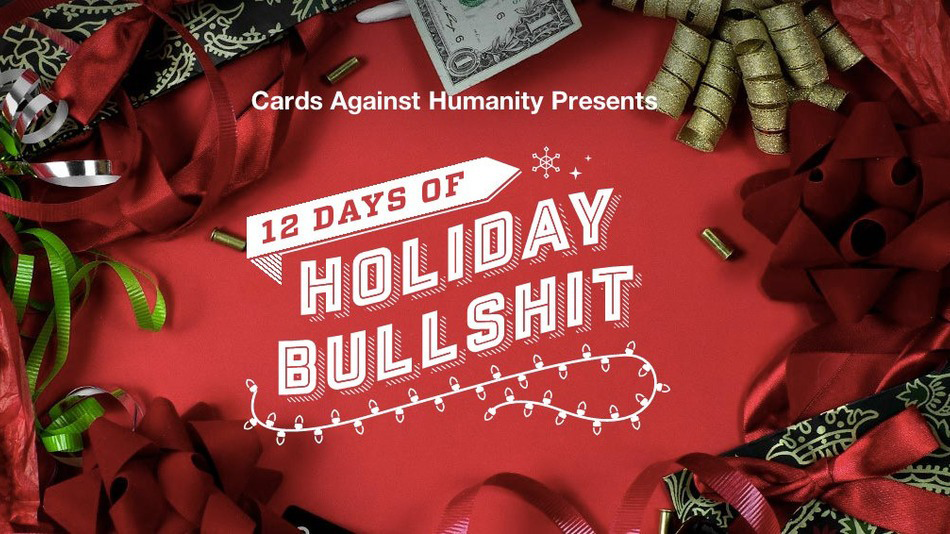 In 2013, they took on Christmas by releasing the “12 Days of Holiday Bullshit” in which customers paid $12 and handed over their details and were mailed 12 unconventional Christmas gifts, including a lump of coal and extra cards to add to their pack.

They also donated $100,000 dollars to charity and informed recipients that one of their gifts was a dollar donated to good causes.

After an initial product launch, multiple extension packs and four years of company history, 2015 was the year Cards Against Humanity stepped up their marketing game.

Black Friday opened up a window of opportunity that Cards Against Humanity jumped straight through with another unusual campaign.

A very plain sign-up page allowed viewers to pay Cards Against Humanity $5 and receive absolutely nothing in return. A bargain, right? Over 11,000 people donated $5, with over 1,100 people giving up to $100 a time.

The company raised over $70,000 and proceeded to announce that they had spent the money on their employee’s greatest desires.

The company also released another campaign promising eight mystery presents to be delivered for Hanukkah to people who signed up.

These gifts included the chance to vote on whether an original Picasso painting should be donated to the Art Institute of Chicago or be laser-cut into 150,000 pieces so that each recipient could have their own tiny scrap. The more ridiculous the stunt, the more social shares and the more word of mouth attention Cards Against Humanity gets. It’s a simple and hilarious strategy that has won them huge sales.

And now? It’s fun for all the family

Cards Against Humanity has truly gone mass market and, despite the taboo subjects printed on the cards, parents, grandparents, aunts and uncles are being involved in the fun. 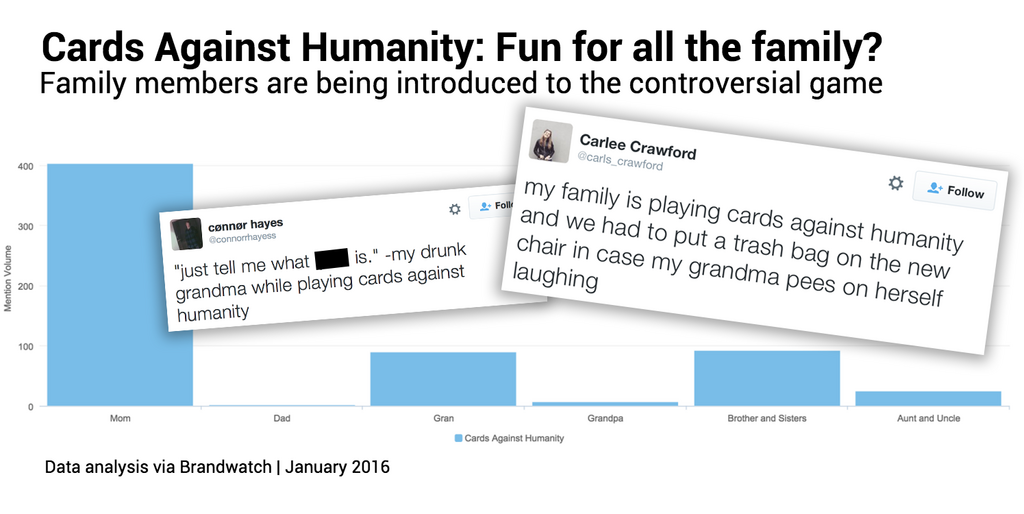 According to social, moms love it, but dads are having none of it. This graph shows an interesting view on family dynamics, with moms taking the lead in mentions about Cards Against Humanity, followed by brothers and sisters.

Perhaps already a joker in the pack, dads are spectacularly avoiding social media mentions with the game. Best of all, however, it seems as though grandmas are putting down the sewing kit and playing their hand too, coming in a very close third in mentions behind siblings.

If the game itself doesn’t find your funny bone, watching your granny burst out obscenities is a sure-fire recipe for hilarity.

Alternatively, if you don’t want to mentally corrupt your grandma, take a look at Buzzfeed’s video of other people’s grandmas playing Cards Against Humanity instead.

How to Leverage Instagram Reels to Grow Your Business