Our newest research finds that, despite a small fanbase, Chef’s Table is the best Netflix Original out there, commanding a 95% positive social media sentiment. We’ve drilled into the watching habits of millions of social media users.

Television is increasingly becoming a cornerstone of Twitter engagement. Unfolding in real-time, serial TV shows are the perfect complement to Twitter’s frantic firehose

Once a week, thousands of like-minded fans gather around a single hashtag – whether it’s #xfactor or #gbbo. Then, one-off events provide a gigantic, rich data-pile for analysts to rip apart.

Netflix Originals are stealing the thunder from established networks. Our recent report places Netflix as the most loved TV ‘network’ on social media.

House of Cards and Orange is the New Black are both preparing to return for a fourth season – it’s just been announced that Narcos, too, will be getting another season under the direction of José Padhilla.

When television shows make their debut on Netflix, social media analysis becomes harder. It’s not useful to analyze in real-time, as episodes come out simultaneously.

The most buzzworthy shows

Our research looks at 10 of the most popular Netflix original comedies, dramas and documentaries. The data we’ve collected here is based on a 20% sample query of exclusively Twitter data.

Going back to January 2015, we found 1,756,810 Twitter mentions of the most popular shows. We’ve ranked them according to the number of mentions. Below is the absolute ranking.

Understandably, the TV shows launched earlier in the year have a head start. This makes it all the more impressive that Narcos is already in fourth place – beating Sense8 and BoJack Horseman.

Looking at data richer than ‘how big’ is more interesting.

Chef’s Table was the most popular among the users we surveyed. Despite the low number of overall mentions, positive tweets outnumbered negative tweets 20 to 1. It has an outstanding 95.7% positive social media sentiment score. 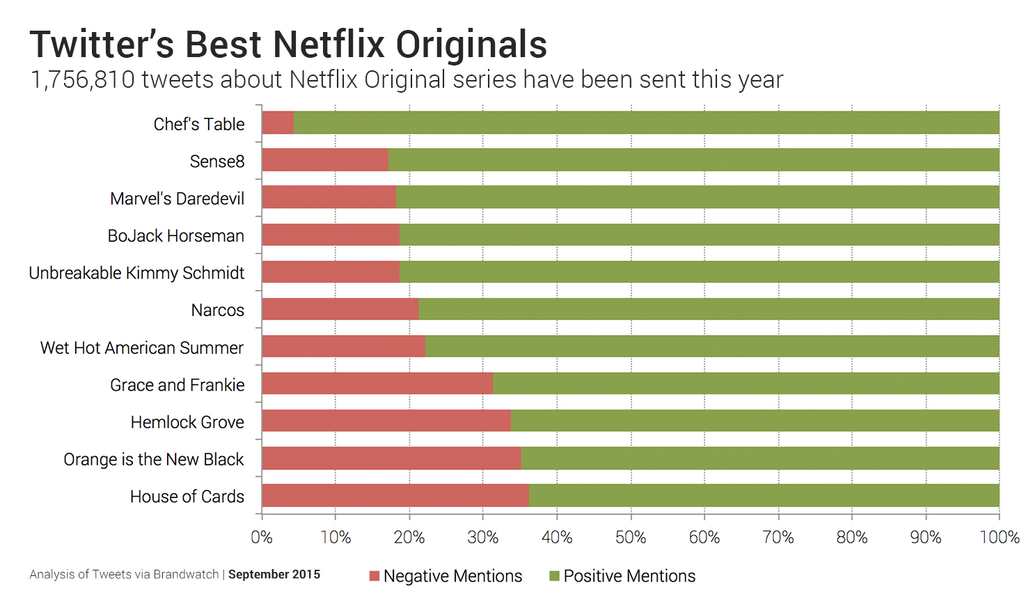 Sense8 is in second place with a 82.9% positive score. Marvel’s Daredevil and Unbreakable Kimmy Schmidt come in joint third.

The two most talked about shows, Orange is the New Black and House of Cards received the biggest amount of negative sentiment. Both launching new seasons in the coming year, it could be a sign some social media users are facing ‘Netflix fatigue’.

“We’ve seen that returning shows are scrutinized more than originals,” said Analyst Hannah Tregear. “When shows return for their third or fourth season – particularly Netflix Originals – you’ll get stacks of contrarian tweeters and op-ed pieces claiming it has ‘jumped the shark'”

Our research reveals that Marvel’s Daredevil and the ‘slowest burn’ of all of Netflix’s original series. Furthmore, Narcos might have an even longer tail of social media excitement.

8.3% of the mentions of House of Cards this year came just from the launch day alone. With Orange is the New Black, launch day accounted for 12%. These were both intense, short-tailed spikes of social buzz which quickly died off.

By comparison, Marvel’s Daredevil’s launch day only accounted for 5%.

House of Cards and Orange is the New Black’s mentions halved within a day – it took Daredevil’s tweetbase four days to half.

Narcos, released only one week ago, saw a busier launch day on Twitter than Wet Hot American Summer. It’s still got momentum, gaining over 15,000 tweets a day on average.