Misplaced Bets: “If Donald Trump Becomes President I Will _____”

The Brandwatch React team analyzed the most common things people said they'd do if Trump became President. We hope they weren't all serious.

If we learned anything from last year, it was that nothing is certain.

That didn’t stop thousands of people placing high-stakes bets on high-stakes political outcomes, though. We’re not referring to a fellow real estate tycoon that won over a million dollars betting on a Trump victory, but the people who tweeted about what they’d do if Trump was victorious.

We took a look at tweeted mentions of “If Donald Trump becomes President I’ll ___” (and variations on that term – I will, Ill, if @realdonaldtrump wins, if Trump wins etc) back to the beginning of March last year and up to the day before the 9th of November election.

We excluded retweets to see if we could quantify some of the personal bets people were placing. While many retweeted the “if Trump becomes president” tweets, they weren’t placing bets by extension. (Of course, not everyone who wrote the original tweets were serious – at least we hope not).

It’s not all anti-Trump, either – we found many people saying that if Trump became President they’d celebrate, or that they’d do something positive like quit smoking in order to appease the election gods…

Armed with thousands of tweets and our trusty Excel skills, we found the most common verbs that followed the phrase “If Trump/Donald Trump/realdonaldtrump/DonaldTrump wins/becomes President I will/I’ll/Ill ______” 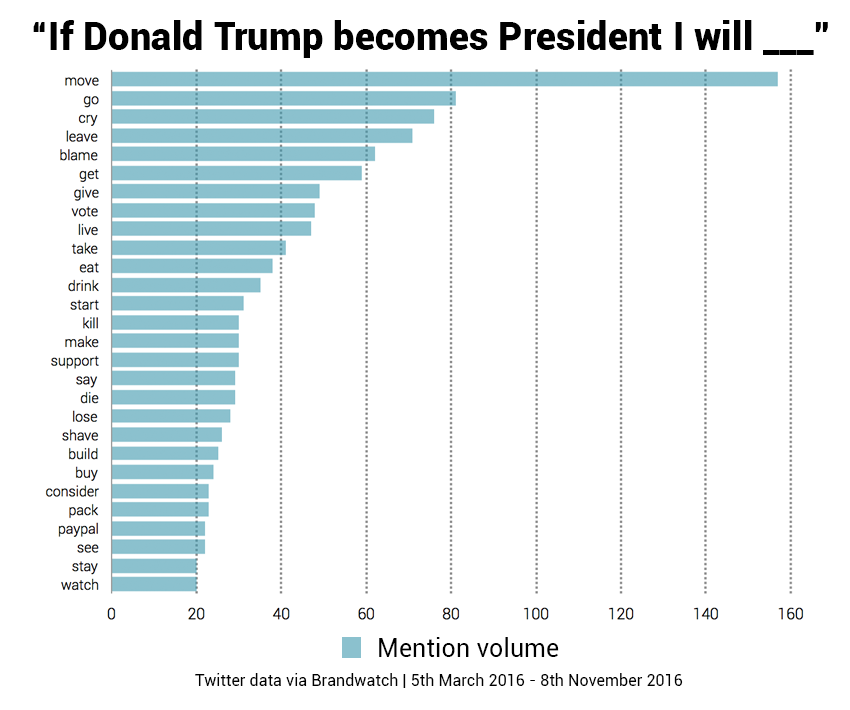 We thought we’d break down some of our favorites.

“I’ll move” was undoubtedly a popular option, and Canada appeared to be the top destination. 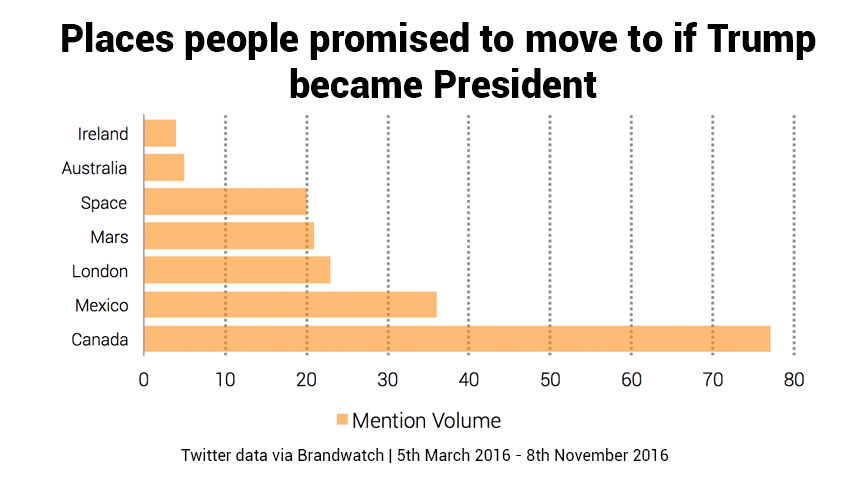 As Trump’s victory was announced, the Canadian immigration website crashed as visitors flooded the site. However, there’s no concrete evidence yet of mass movement to the country.

Celebrities, too, pledged to leave the USA for different countries if Trump was victorious. Others, however, wanted to go further afield.

If Trump wins I will move to Mars .. I really don't get why would people vote for him #ImWithHer #ElectionDay

If Donald Trump Wins I Will Cry

Of all the “if Trump wins” bets this seemed to be the most believable. As we all know, many tears were shed.

But not everyone was crying tears of sorrow.

I SWEAR IF TRUMP WINS, I WILL CRY, I WILL BE SO HAPPY!! I DON'T KNOW WHETHER TO DRINK OR EAT!!

Whatever happened, rivers of tears were going to flow.

If Donald Trump Becomes President I will Blame ____

Before the result was even announced people were spouting who they’d blame for a Trump victory. If you’re looking for a taste of the anger that many felt at the thought of him becoming President, a quick scroll through these tweets will probably help.

From millennials who didn’t vote to baby boomers to the media (specifically @cnn, @nbc, @msnbc, and @abc) to Bernie Sanders, the fingers of blame are pointing all over the place.

If anything, this tangled mess of emotive tweets goes to show that there’s no one reason that can be attributed to a Trump victory.

For some reason, a Trump victory would mark the start of many a strange diet.

People were threatening to eat all kinds of stuff. A Timberland boot, a can of cat food, a piece of A4 paper (not A3, not A5), a sombrero, a Wii U, a pencil, shampoo…the list goes on.

Margaret Wente claimed she would eat her column.

We certainly hope this didn’t happen.

If Donald Trump becomes President I will pay ____

“Paypal” isn’t usually considered a verb, but that’s how many people were using the word in the lead up to election night. We don’t imagine many of these were legitimate.

if Trump wins I'll PayPal everyone that RTs this $100

Many of the mentions were people joking about the number of money offers, however. In fact, @YAHIRMATA was one of them.

Perhaps Trump’s famous head of hair taking residence in the White House was too much for these tweeters, because we found a lot of people saying they were going to shave themselves if Trump became President.

It’s an interesting reaction, but in these confusing times everyone has their own way of dealing with things.

There were even a few double-whammies.

If trump wins I'll shave my beard and eat it. I'll stream it live too

If Trump wins I'll shave my beard, head and move to Barcelona!

Are you a journalist looking to cover our data? We have plenty more! Email us at [email protected] for more information.