John Lewis 2017: Trying to Understand #MoztheMonster on a Hangover is Harder Than You’d Think

NEWSFLASH! Christmas isn’t – despite what you may think – only about hastily-bought presents wrapped in tin foil, and questionable, claggy Pret sandwiches with sprouts in.

Christmas is, in fact, the holiday where we celebrate the big J. Not Jesus, John Lewis.

You know the drill.

Every November, just after the halloween decorations are boxed up and put back in the loft, the whole of the UK goes completely batshit over a series of TV advertising campaigns by massive brands, costing tens of millions of dollars.

“The festive season accounts for such a significant proportion of sales that there can be no holding back on ad spend,” says Leo Rayman, chief executive of Grey London, the ad agency behind Marks & Spencer’s Paddington-led campaign. “A bad Christmas can make or break a company’s year.”

Sounds depressing, right? Wrong! The whole christmas adverts thing is actually very wholesome and pure and I’ll fight anyone who isn’t into them. And you don’t want to fight me. I have been known to bite.

The most anticipated of all of the campaigns is always the John Lewis one.

And as is tradition, I’m wheeled out once again from behind the React sweet tin to give you all the data and try and figure out what you good people of the interwebs think of it. The problem here is that we expected it to drop yesterday, and spent all day geeing ourselves up. We got so over-excited that we went to the pub and drank a load of wine, so this blog could get interesting.

SO! Let us begin.

If you’ve somehow missed the cultural phenomena that is the advert, this time directed by Michel Gondry (!!) to the tune of a not insignificant £7m, here it is. It’s called Moz the Monster:

Wow! No animals this year! Fact time: the 2016 campaign saw a return to using animals as the stars. In 2015 John Lewis ditched the CGI fur for real humans for ‘Man on the Moon’, and we saw more people discuss the animals in 2016 than the 2015 ad.

Everyone bloody loved Buster the Boxer. Our CMO, Will McInnes, summed up why the campaign gave us the feels.

“As marketers, we know that a great ad is all about eliciting emotions.  It’s classic big brand storytelling, meets distribution in the social age. Essentially people won’t share boring content and John Lewis knows it. In a world where our attention is pulled in so many different directions, it’s a reminder that a good story still matters.”

So what about this year? WELL.

This year we get a CGI imaginary monster who lives under a child’s bed and seemingly torments him, bringing on severe long-term insomnia, driving the child to the point of near exhaustion, before they in fact become great friends – but then gets brutally murdered by the child’s well-meaning, but ultimately evil, parents.

That’s how I read it, anyway. But I’m feeling particularly cynical today.

What did the public think?

the monster isn't real, boy can't sleep as scared of the dark so creates an imaginary friend to play with then mum and dad get him a night light from John Lewis for christmas and he can sleep so no more monster. not hard to understand #MozTheMonster

Our React data elves have been trawling through tens of thousands of social posts to find out how the ad has gone down with the general public.

We tracked 18,260 mentions of the Moz the Monster advert between 7am and 10am today. 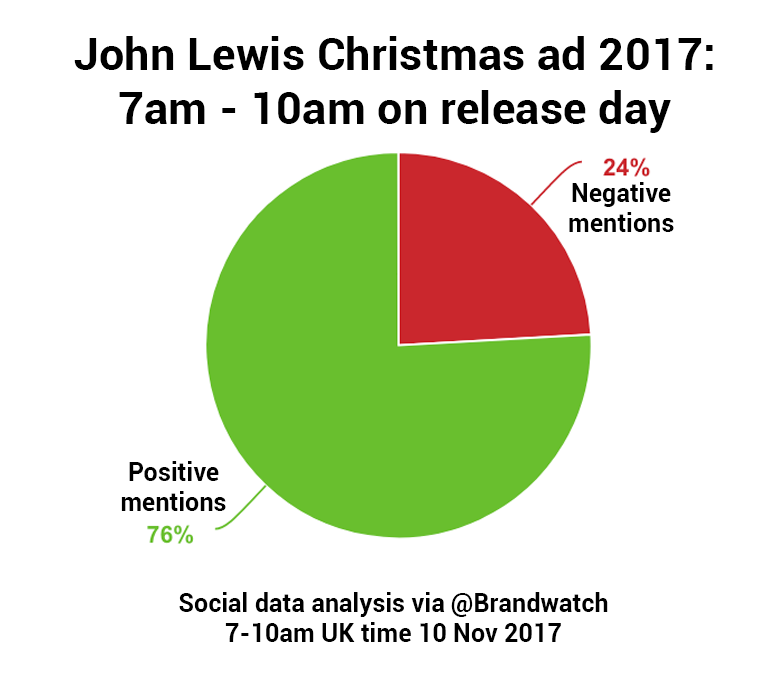 More women had something to say about Moz (every time I type that I am brutally reminded of SEO) than men. 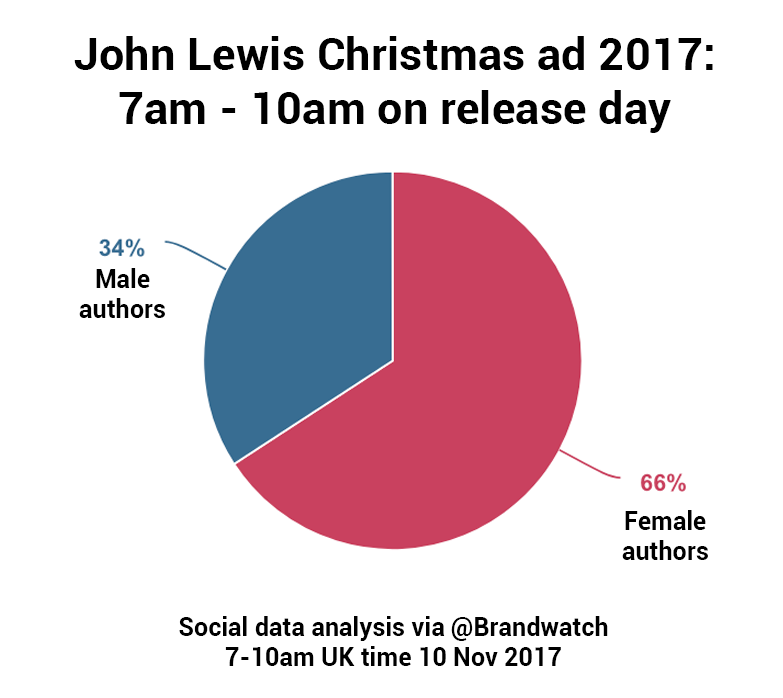 How does this compare with previous adverts?

Last year’s Buster the Boxer advert went live at 8am, and by 9.50am there were over 30,000 mentions of Buster, with 25,603 of the hashtag #BusterTheBoxer. Slightly less men have been tweeting about the ad than last year. 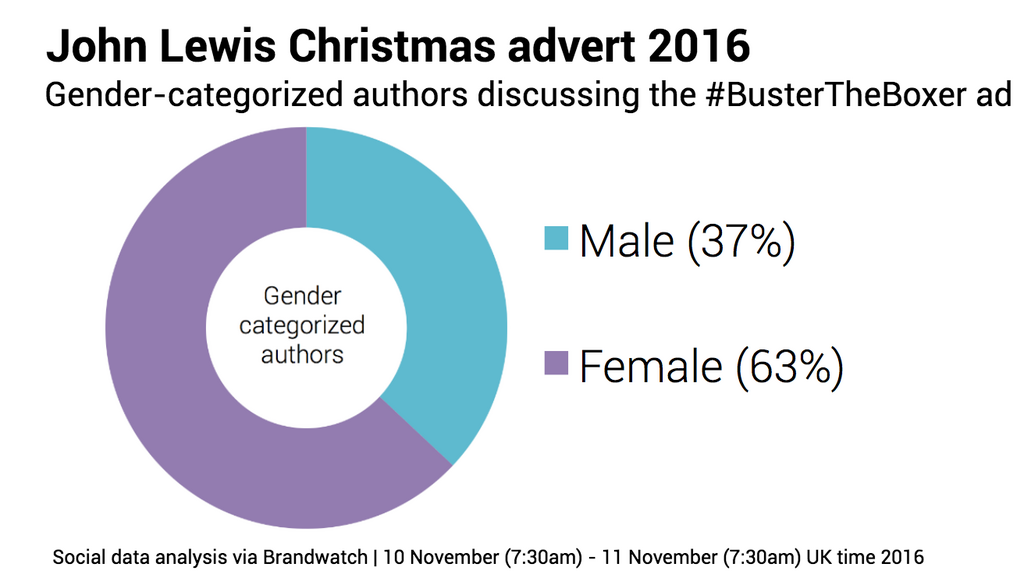 I’m happy to go on record and say this year’s isn’t my bag. To be honest, today’s not my bag. So it could be that. But I have to say I agree with those who have voiced their ‘disappointment’ and ‘lack of tears’.

Everyone knows that the John Lewis advert is basically TV’s ‘Love Actually’ – soppy, tear-jerking, and designed to manipulate you into buying stuff (John Lewis: toys. Love Actually: turtlenecks). Thing is, this year’s one is essentially trying to get you interested in buying a glorified nightlight. It’s a no from me.

I just DON’T GET IT. Why does the Monster get sent away at the end? I thought they were mates! Why is there a badly wrapped gift in their house anyway? Why are the parents not concerned about the prospect of a stranger sneaking into their house and gifting their son with a LIGHT? Imagine getting a light for Christmas when you were 7. Awful.

The rest of the team were as perplexed as I.

Are we missing something? Is my empathy chip disslodged?

Nightlights do make monsters go away, but making a friend disappear—even if it means getting more sleep—isn’t much of an uplifting moment (even if the spot plays up Moz’s good intentions to the hilt, then hints at the end that he hasn’t really gone away at all).

Let’s see what you all think.

Me: CANT WAIT FOR THE JOHN LEWIS CHRISTMAS AD, LETS HOPE MY EXPECTATIONS ARENT TOO HIGH AND ITS MASSIVELY UNDERWHELMING

The new @johnlewisretail ad just landed in my inbox. For me, the formula/story is a bit too similar to the penguin one. Man on the Moon still wins hands down for me but the song in #MozTheMonster is perfect ?? Still as heart warming as ever ❤️ #johnlewischristmasadvert

We’ve seen a lot of complaints of the ad being ‘underwhelming’ and not understanding what was actually happening in the ‘plot’.

#mozthemonster I don’t get it ?

Moz the Monster stars in the John Lewis Christmas ad

We’ll be tracking the reactions of people taking to their Twitter accounts as the festive season continues to swing.

What did you think of the advert? What’s the worst Christmas present you’ve ever got? Let us now in the comments, or over at @Brandwatch on Twitter.