React: The Latest Social Data on the EU Referendum

As the EU Referendum edges nearer, Britain is bracing itself for a vote that will decide the fate of generations to come.

Brandwatch has been monitoring the conversation and we’ve found some incredible insights.

Before we share them, remember while you read that this data captures the thoughts of thousands of social media users but in no way does it point to a specific leave or remain result.

Now, buckle up and get your #Brexit hat on.

We’ve tracked 5.4 million mentions of the EU Referendum (including associated Remain and Leave campaign hashtags) over the last two months. Volumes are certainly rising, with around 4 million of those occurring in the last month alone.

The magnitude of the referendum is reflected in the huge volumes, the likes of which are rarely seen when studying a UK based issue. 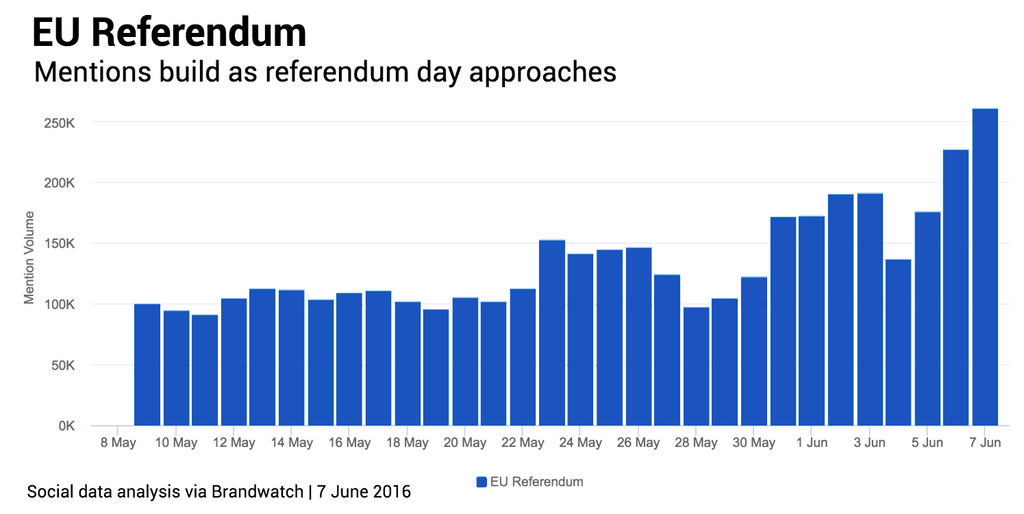 The deadline to register to vote fell on Tuesday 7th of June, and we found over 30k mentions of people talking about registering on the day.

Many are calling for the deadline to be extended after reported problems with the website used to register online.

A hashtag war with surprising results

Vote leave and vote remain related hashtags were measured in our research, and putting them side by side for the last 31 days left the leave team in the lead.

Of course, this doesn’t necessarily mean that more people using social media will actually vote leave and these mentions will include people who are talking about the leave campaign but don’t necessarily support it. 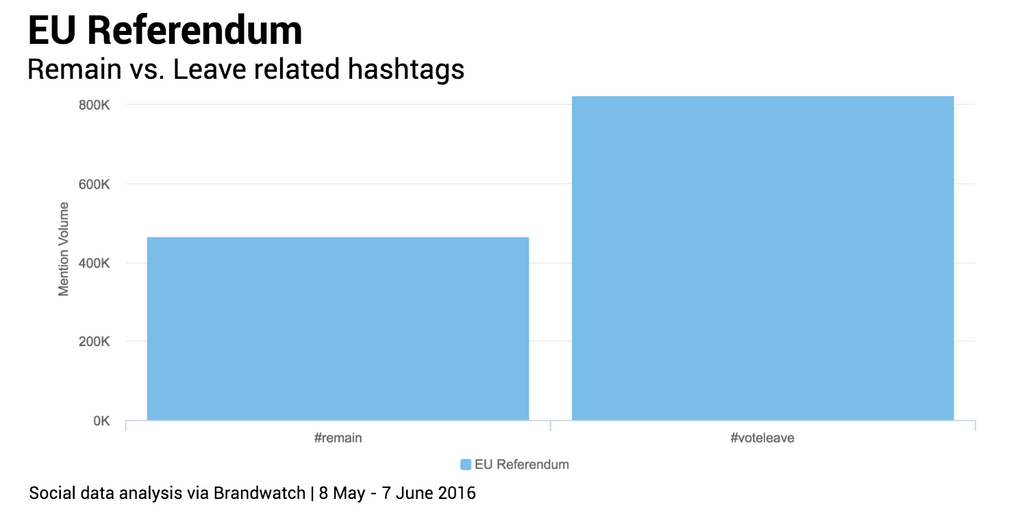 However, the fact that leave related hashtags are registering at nearly double the rate remain ones are is definitely interesting.

Looking at the top mentioned hashtags for the whole EU Referendum conversation, the top three are as follows:

Also notable in the competing hashtags data is the gender breakdown of mentions which really exemplifies the difference in volumes between male and female categorized authors in the overall debate. 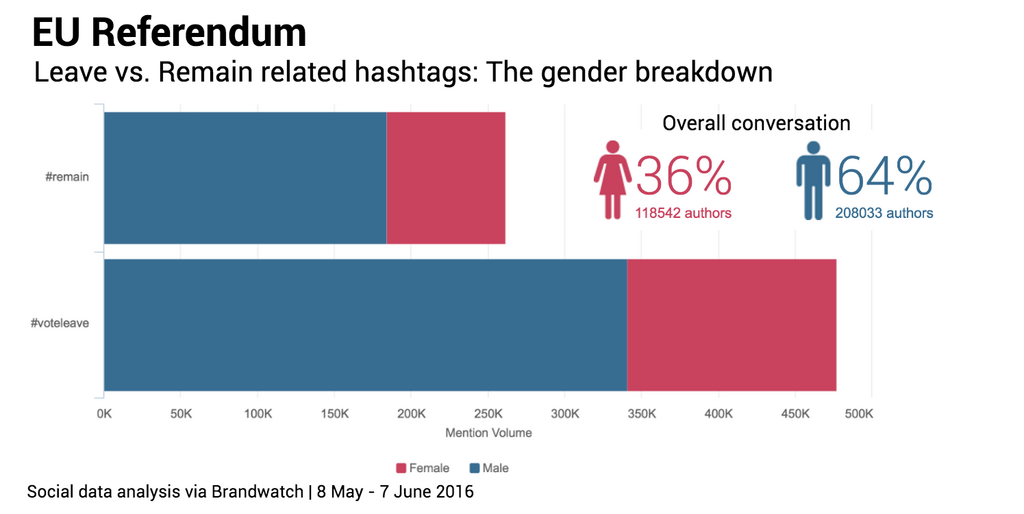 Breaking down the issues

Looking at the top mentioned issues surrounding the EU Referendum, the economy and immigration are definitely at the forefront of the conversation. 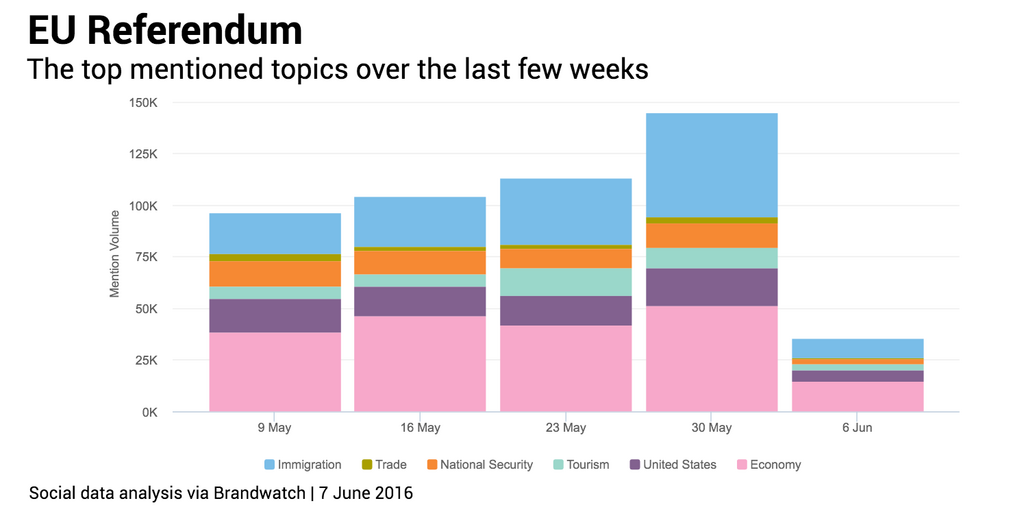 Britain’s relationship with the United States is also a large concern after comments from President Barack Obama on the UK going to the “back of the queue” for trade deals with the US if they left the EU.

Breaking those topics down by gender, the priorities are fairly consistent with the overall figures, though percentage-wise male tweeters are more concerned with the economy and females have a higher percentage of mentions for national security, tourism and the United States. 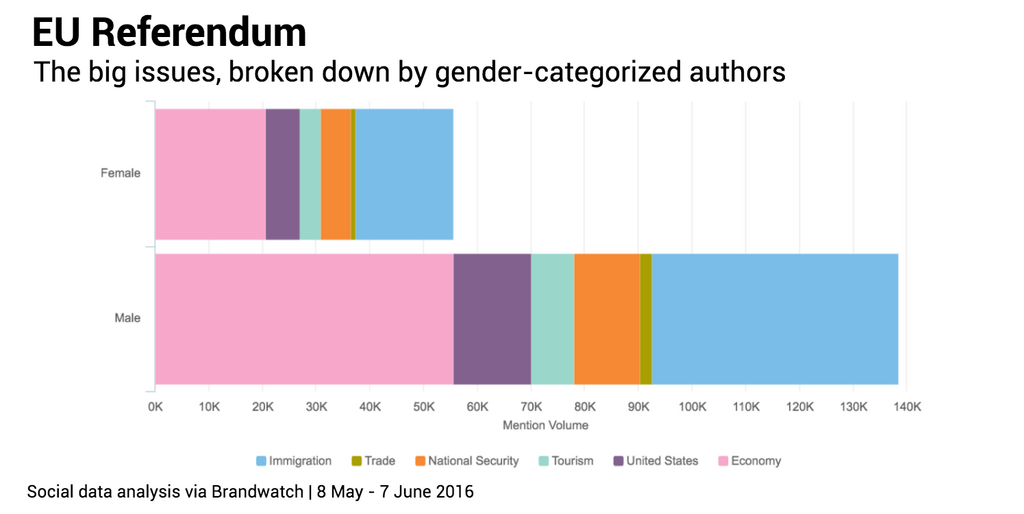 Taking a look at the political figures being mentioned most alongside the EU Referendum, it’s British Prime Minister David Cameron getting the most. 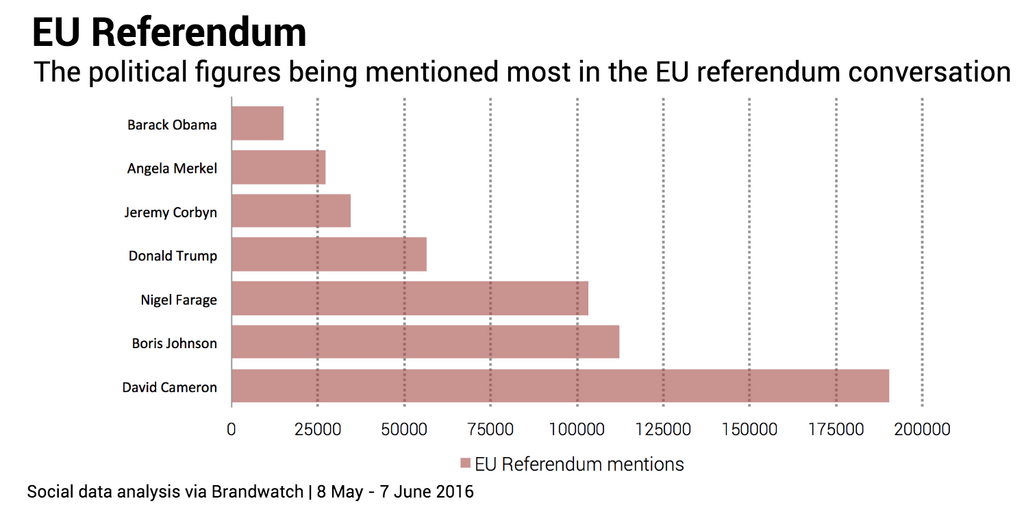 Boris Johnson and Nigel Farage, prominent figures in the leave campaign, are coming in second.

As the referendum gets closer and closer we’ll be keeping a close eye on the social data.

Are you a journalist looking to cover our data? Email [email protected]