The Brandwatch React team take a look at conversation surrounding Lucky Charms marshmallows to find out how social media reacted to the retirement of the hourglass.

Lucky Charms have been around for more than 50 years and are one of the top selling cereals in the US. Despite their lengthy history and popularity, the brand is no sucker for tradition and times are changing.

It’s a sad time for one cereal veteran.

A staple of the Lucky Charms marshmallow collection for 10 years, the yellow hourglass, is being put into retirement.

The General Mills brand broke news to cereal aficionados recently and has rubbed salt in the sugary wound with a  brutal Instagram post exclaiming that time is running out for the hourglass.

Lucky Charms fans are encouraged to get to stores fast if they want an hourglass to save, although the stinging irony is that time will inevitably decay the stature of the object that was once its prudent keeper.

If you could pick the #NextLuckyCharm, what would it be? Use an emoji to tell us! pic.twitter.com/kcrNFeWKIp

The announcement that the hourglass, which gives Lucky the Leprechaun the power to control time, was to be retired led to some true heartbreak.

What perhaps makes the reveal most heart breaking is that Lucky Charms tweets about how people should get their hands on the cereal before one of the marshmallows was discontinued got more engagement than the one that revealed it would be the hourglass.

This is your last chance to win a box of All Marshmallows before one of them is retired! Enter to win 1 of 70 boxes by liking us and sharing a pic of something that puts a little magic in your day with #luckycharmssweepstakes. Ends 1/29. Full Rules: https://t.co/KA50KJLxjb pic.twitter.com/FNnqFoY6Im

Overall, while some people were outraged, the reaction to the hourglass’s retirement on social media was fairly subtle. We tracked a number of news mentions, but whatever anger and sadness there was wasn’t bubbling into the hundreds of mentions.

#PlantBased: An Exploration of Online Vegan Communities and Conversations

How do online vegan communities manifest themselves online? What do they look like, who frequents them, and what do they talk about? The Brandwatch React team investigates.

This muted reaction to the hourglasses’s departure from cerealdom made us wonder how things could have been had another of the marshmallows been cut from the accomplished squad of lucky sweet treats.

Which of the marshmallows are people most interested in?

While the retirement of the hourglass may be sad, if the rainbow had gone there would have been riots. 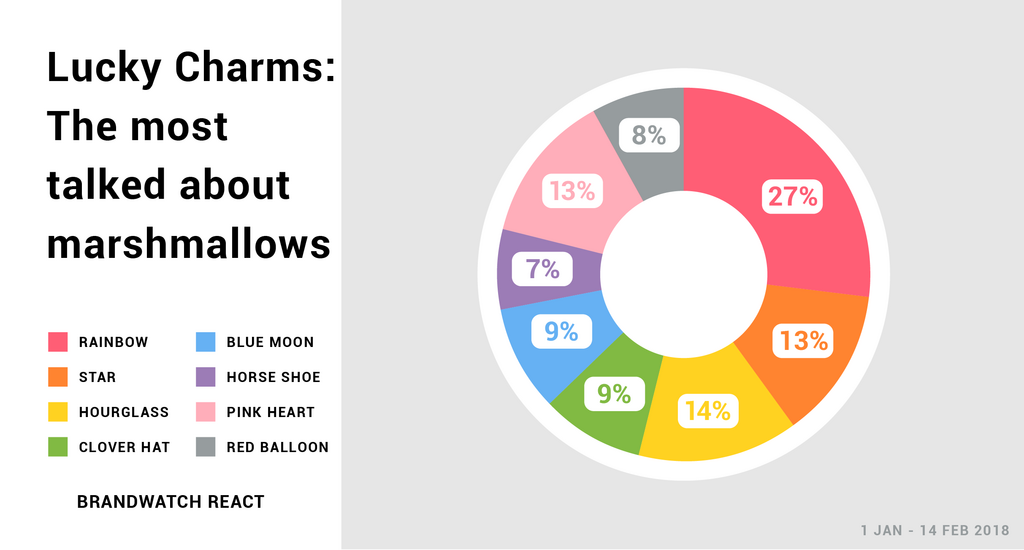 You may be surprised to hear that people would even go to the trouble of tweeting about individual marshmallows, and we should note that often they don’t. Many of these mentions included people discussing multiple marshmallow shapes.

Hi why does lucky charms think they can just retire the hourglass marshmallow nah ?️ how are we supposed to sing “Hearts, Stars, and Horseshoes, Clovers and Blue Moons, HOURGLASSES, Rainbows, and Tasty Red Balloons”

Despite that, some seemed more popular than others and it was the majestic rainbow that dominated Lucky Charms conversation. The hourglass, with its general mentions as well as reactions to it’s retirement, came second.

(Updated 20 February) News just in to the Brandwatch React newsroom – the hourglass has been replaced by none other than a unicorn.

Have We Reached Peak Unicorn?

Was 2017 the peak for unicorns? We take a look at the data behind the unicorn trend from makeup to Starbucks to fashion. Grab some glitter and settle in to find out what we found

Why is any of this even slightly useful?

About half way into writing and researching this post I began to hesitate. What was I thinking writing about a mass produced marshmallow? Why was I putting time into gathering data around its sugary brothers and sisters?

I wanted to show that no matter how small the announcement surrounding a popular product, people have opinions.

If you can segment the conversational subtleties between clumsily shaped marshmallows in a cereal box, the importance of listening to customers when it comes to larger scale changes around products (particularly when it comes to those that might affect someone’s likelihood of purchasing the product at all) becomes clearer.

While the hourglass’s retirement is a small change, the colour and design of our food is important for how we perceive and taste it.

While Lucky Charms may not lose sales over switching out one marshmallow type, if they were to replace the whole batch of marshmallows with new charms they could see a more substantial shift in the food’s reception.

Without some serious evidence that this was what their loyal fans were craving – something that could be picked up on using social data as well as traditional research methods – it would be a risky move indeed.