Merci Arsène: Social Data on the Tears, the Joy, and the Hypocrisy

The Brandwatch React team takes a deep dive into the data surrounding the news that Arsène Wenger will be leaving Arsenal after the long-trending #WengerOut campaign. We uncover the tears, the joy and the people who were keen to get him and and ended up with teary eyes.

The announcement from Arsenal’s official website that long-serving manager Arsène Wenger had decided to depart from Arsenal at the end of the season became one of the hottest topics on the internet overnight.

There was a huge amount of content being posted with regards to Arsène leaving, the rumours about the candidate that was poised to replace him, the gratitudes being shown for all he has done for the club, and even sentiments from former #WengerOut proponents getting all teary-eyed.

A huge, and very mixed, reaction 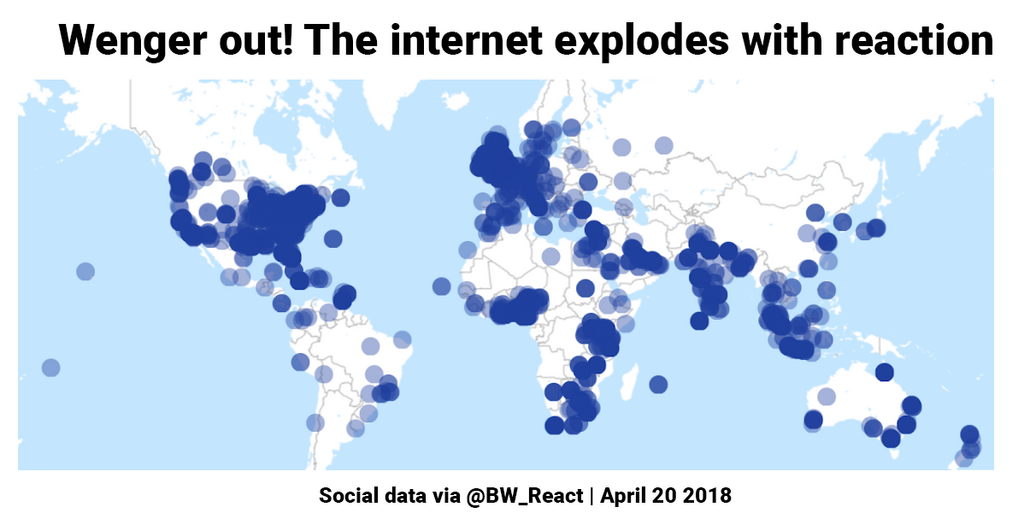 So how did our global fans feel about Arsène leaving? Using Brandwatch’s emoji cloud, we can get an accurate sense of the general sentiment from the fans. 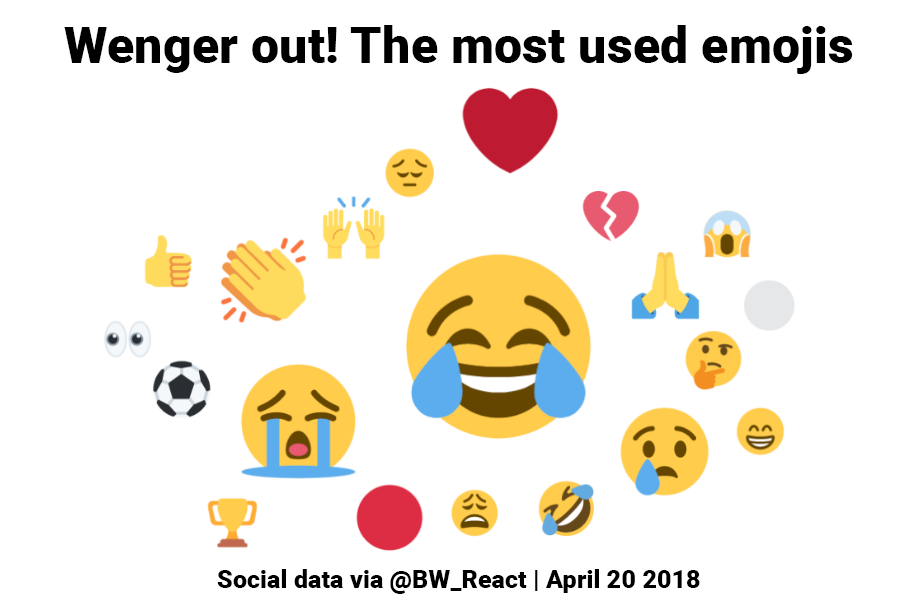 We see here a mix of reactions from the fans – from the terribly upset and heartbroken, to applauses and thumbs-ups representing appreciations for his past achievements.

We see a huge number of laugh-cry emoji mentions, with the gist of such mentions often teasing the hypocrisy of some Arsenal fans, who have consistently called for Wenger’s resignation over the years but have done a U-turn in sentiment after the actual announcement.

People will never say good things about you until you die for instance Wenger reign is ending and a week back most arsenal fans were against him but now they loyalty is back to 100℅ ??

Arsenal fans be funny af acting all emotional as if they aren't the ones wishing for #Wenger out ..y'all make me sick ??

Well this is awkward

Here are a few of our favorite examples of fans who seemed to have differing opinions before and after the announcement:

I really do hope we fill the stadium for the remainder of the season and show Arsène the unwavering love and support that he’s shown the club since day 1.

“There’s only one Arsène Wenger!” Ringing around the Emirates. Still don’t know how to feel…

Has the fucking clown resigned yet?
Has anyone in the fucking board grown a pair and fucking sacked him yet?
What’s going on?
Fuck his legacy, he’s no legend anymore. He’s a legend in stubbornness, arrogance, selfishness and FAILURE.
SACK THE FUCKING CLOWN!#WengerOUT #Arsenal

Players must go hammer and tongs at the Europa League to give Wenger the proper send-off he deserves.#MerciArsène#Arsenal #COYG

Using Brandwatch’s sentiment analysis, we are able to view the general sentiment around Arsène Wenger from the start of the EPL season right up til after the announcement.

What we see is a massive shift in sentiment – positivity is up, and negativity is down. 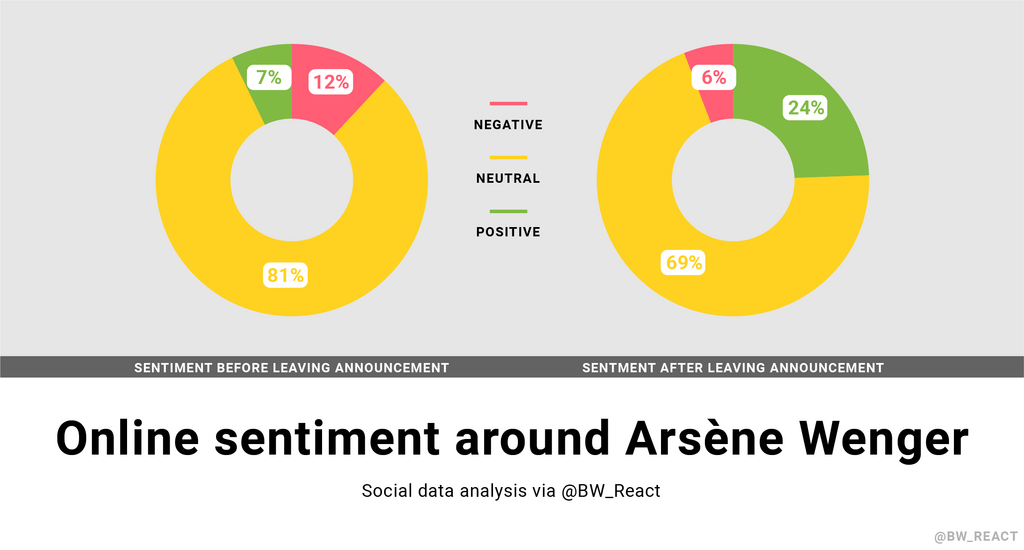 There is much to celebrate about Arsène Wenger. The man has been in management for over two decades in Arsenal, winning plenty of silverware throughout his time.

Which Football Sponsors Get The Best ROI?

In fact, his most fondly-remembered achievement would be his 49-game unbeaten Premier League record. No manager or team has yet to achieve that.

Also, despite not having won a Europa League before, plenty of fans are hoping Arsène delivers the silverware at the end of the season, ending his stint on a high. 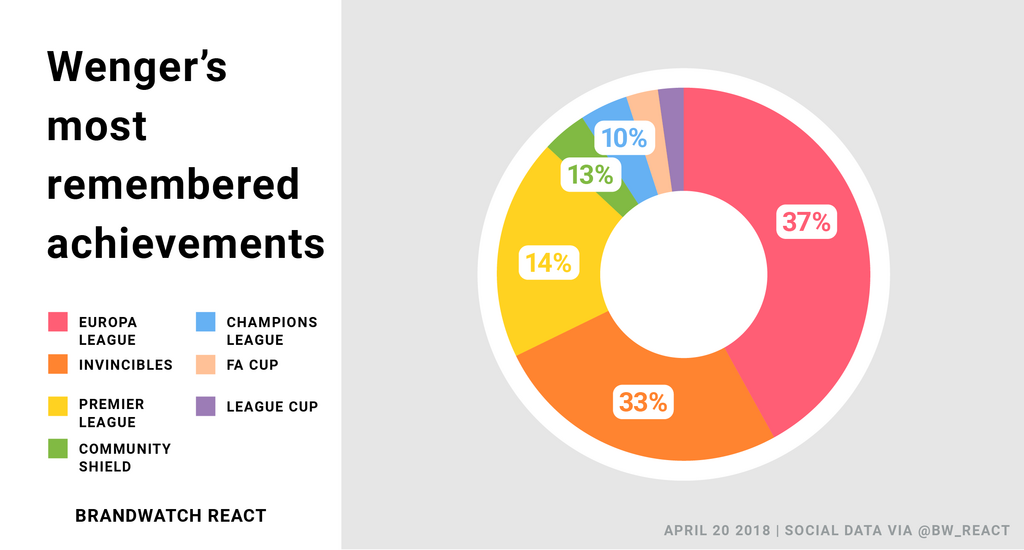 Looking to the future

A huge part of the conversation revolved around the potential replacement.

Brandwatch’s newly improved word cloud allows the data to be segmented using entities such as People and Organizations. In this instance, the ‘People’ categorization comes in helpful when looking at the different people who are involved in online conversations around the managerial vacancy at the end of the season.

A few familiar big names pop up at a glance –  with Brendan Rodgers, Luis Enrique, Carlo Ancelotti, Max Allegri, and even former captain Patrick Vieira all linked to the job.

Interestingly, fans have suggested the unlikely Senol Gunes from Besiktas, due to his surname ‘Gunes’ having an affiliation with the club, just like Arsène’s did. (For non-football fans, Arsenal is often called “the Gunners”).

Whoever replaces Wenger at the end of the season definitely has some big boots to fill – the dedication he has given to Arsenal is unquestionable. As summed up perfect by ex England international Gary Neville, he did change how the game was played and deserves a respectable send off.

Arsene Wenger built the best teams that I played against in English Football .The 98 team was Amazing.The biggest compliment is that he played football that made us change the way we played against them. He now deserves the most incredible send off from all in the coming weeks.