React: More Tweeters Want to Fight Donald Trump Than Vote For Him

More people on social media want to physically hurt Donald Trump than vote for him. Our newest research comes to surprising conclusions.

Donald Trump is one of the most controversial figures in US politics right now.

A real-estate billionaire, Trump has ruffled feathers in politics since announcing his candidacy for the president of the United States on June 16.

Despite previously identifying as a Democrat, he’s seeking the nomination of the Republican Party.

If he doesn’t win the primary, he’ll run as an independent in the presidential race, essential guaranteeing a democrat win.

Even though people inside and out of politics are furious at him for his ‘I say what I think’ attitude, he’s currently topping the polls for the Republican Party nomination.

After receiving significant backlash after his comments on the ‘drugs and rapists’ coming from Mexico, there’s been a pretty constant stream of online anger towards Trump.

Our newest research comes to a potentially troubling conclusion. More people on social media want to physically hurt Donald Trump than vote for him.

Facebook and Twitter’s pipes are at our fingertips, so we’ve conducted another action analysis of tweets and statuses relating to Donald Trump.

The larger the phrase, the more it has been said. 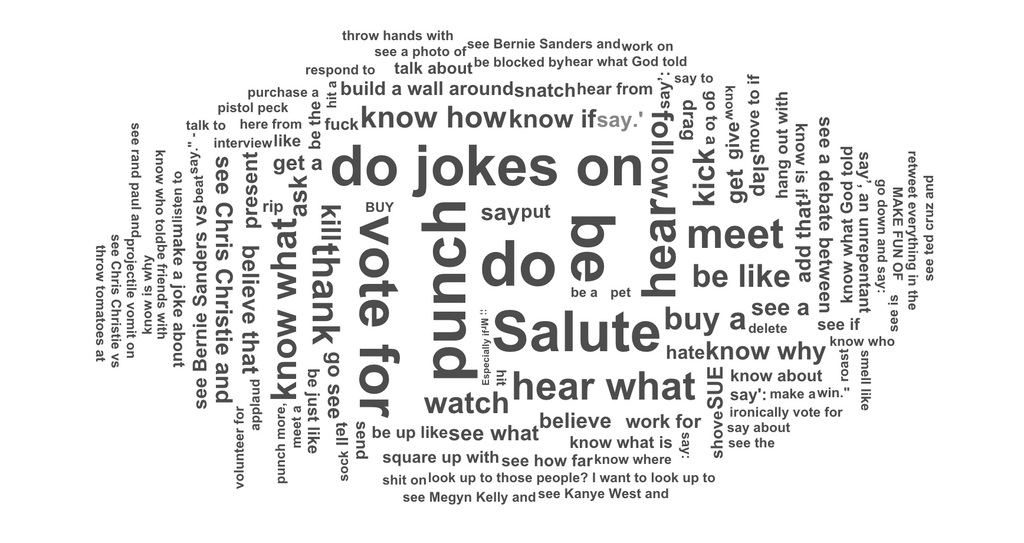 Some of our favourite niche desires are:

Further up the list, we’ve found some surprising results.

Running for president, it’s easy to assume ‘vote for’ would take one of the top spots – it doesn’t.

It actually sits in position #8.

The top verb after ‘see’ is ‘fight’. According to the data, wanting to fight Trump is twice as popular as wanting to ‘vote for’ him.

Bear in mind, this is social media.

In addition to having a reputation as an echo chamber, it’s notoriously leftward leaning as a whole.

People who adore Trump being harsh on immigration, fundamental conservative values, aren’t the ones glues to their phones and tweet feeds all day.

There’s too much violence on social media a whole. It’s even worse for public figures like Mr Trump.

When we analyzed what people wanted to do Taylor Swift, we were surprised with the level of positivity. The nasty verbs didn’t surface until a long way down the list.

As we’ve seen, violence is high up on Trump’s list.

Below, we’ve graphed a few of those words, and compared their position with ‘nicer’ ones. In the top 130 verbs, the ratio of ‘violent’ to ‘nice’ is roughly 1:1. 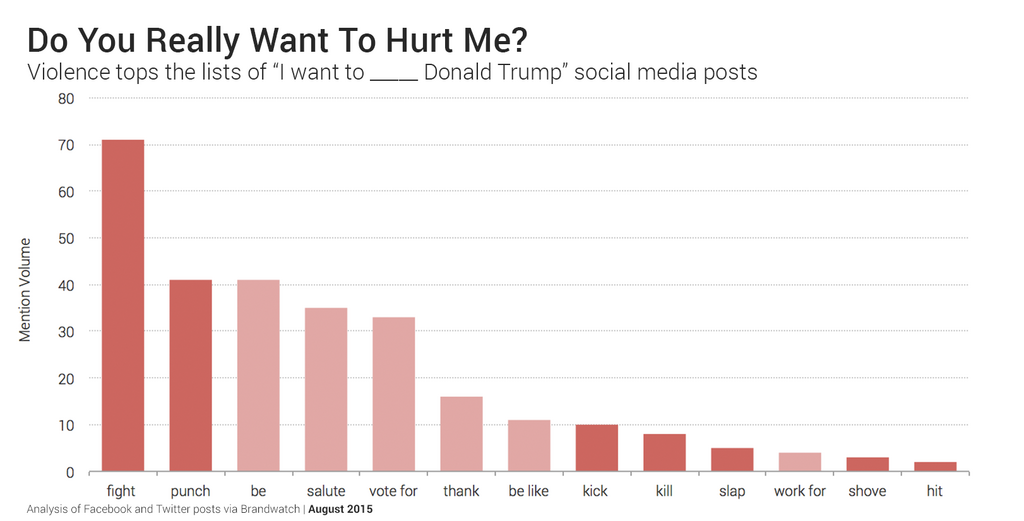 We’re constantly hearing how social media has an important role to play in politics.

Trouble is, no one’s quite sure what that role specifically is.

Poorly-timed photographs can spread across thousands in minutes, thanks for social media. It can make politicians look silly, turning them into a laughing stock for 48 hours.

Twitter especially offers an unrivaled opportunity for politicians to quickly connect with voters. Few are using it in this way.

Even seasoned, media-savvy politicians such a Hilary Clinton are using their twitter feeds and high-budget broadcast channels, rather than directly connecting with people asking them questions.

Knowing Trump, he could be leveraging his off-the-wall personality to respond these tweets about.