Nike’s new leap of faith into long-form marketing with the campaign “Margot vs. Lily” is making waves on social, but is it for the right reasons?

Margot vs. Lily is a brand new original series from Nike following the stories of competitive sisters Margot and Lily.

Its success could mark a significant milestone as brands move away from traditional Facebook posts and tweets, and into more sophisticated methods of targeting young customers.

Nike’s jump into long form advertising targeted at millennials is a surprise to say the least.

The ad-blocking, live-streaming types are being asked to spend over a month being marketed to, and the campaign’s reception has been varied.

Many people’s first reaction to this rare strategic move would be to snigger in doubt and to quickly re-highlight how the fast-paced millennial generation will turn up their noses at a suggestion that Nike could take a collective hour of their time for marketing purposes.

Millennials do love a series but reportedly hate being marketed to, leaving some unexplored middle ground.

Despite the doubts, lots of people are warming to the initiative.

Nike are opening the door to the possibility of building a community, a conversation and a story among individuals that often struggle to grasp the cohesiveness and coherence of most marketing today.

With millennials continually dipping in and out of content, grabbing them with something continuous, engaging and frankly addictive could be the way forward.

We tracked mentions of the series on Twitter to see how Nike’s foray into long-form of marketing is going.

The reaction so far on social

We’re currently awaiting episode 7 of the series, and the likeable characters and compelling story have definitely kept people interested.

Interest, like with any series, has trailed – the first episode garnered 19 million views on Youtube while episode five only just scored 1 million.

The social reaction, compared to the premiere excitement, has also dipped.

In fact, we found that 56% of all the mentions we tracked occurred in the two weeks surrounding the release. Despite this, a loyal fan base have continued watching and demanding more. 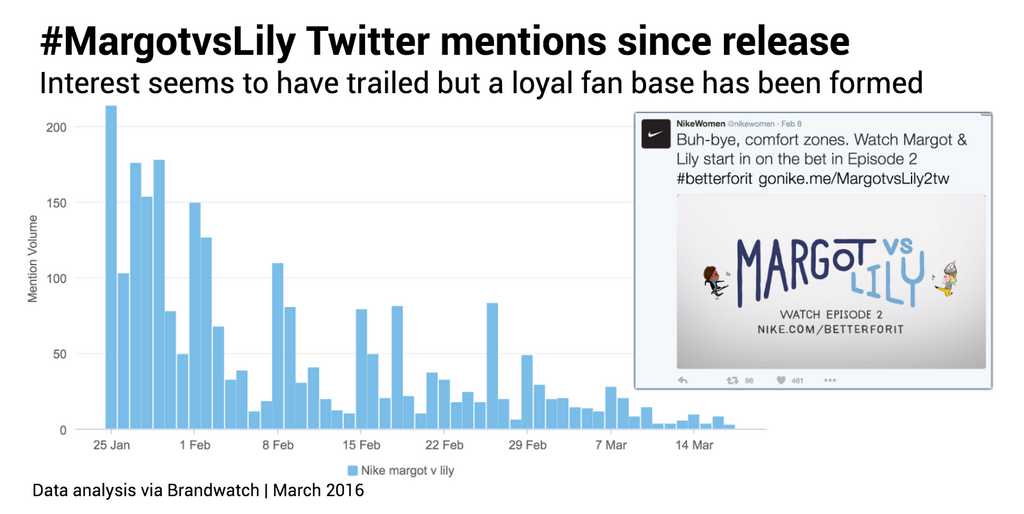 The trailing interest may not look great, but the incredible amount of interest Nike has gained from the series overall can probably be classed as a win.

As could be expected, however, the length of the episodes, and the fact that it’s drawn out, is a big issue for some.

i was so bored i actually did not skip that margot vs lily nike ad on youtube to watch it. it was 6 minutes long orz

@Nike putting that bullshit long margot lily ad when I’m waiting to see #deadpool at the cinema. The fuck. You’re the worst.

But, a lot of people are getting seriously into the long episodes:

.@nikewomen can there be a second season of Margot vs. Lily? with longer episodes? please + thank you.

There are even some fans getting angry when episodes aren’t uploaded when expected.

Meanwhile very cross with @Nike@nikewomen
WHERE IS THE NEW EPISODE OF MARGOT ? LILY?????

We took a look at sentiment-categorized tweets and found an overwhelmingly positive response from the release date to today. 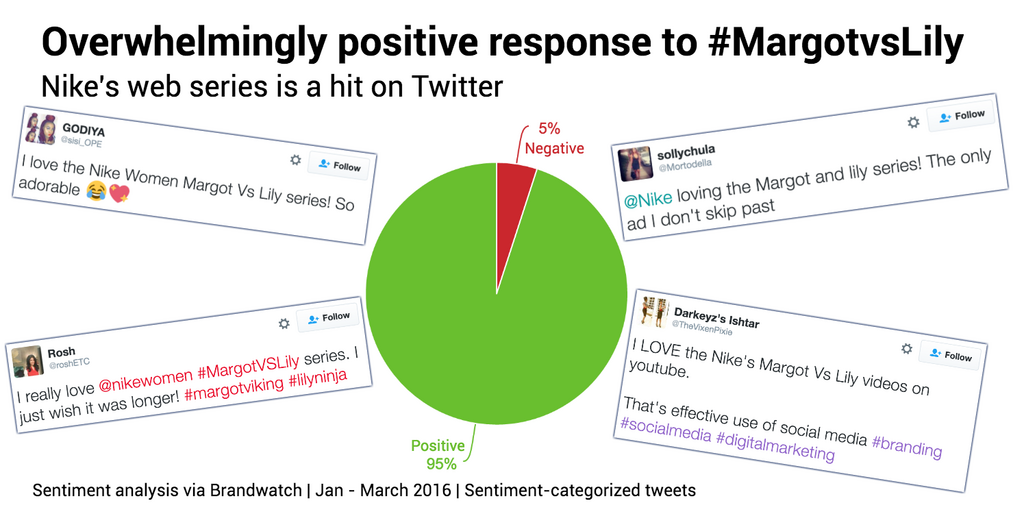 Nike, consider that a pat on the back from Twitter.

Blurring the line between advertising and entertainment

There’s certainly something about Margot vs. Lily that’s winning over viewers.

There are tweeters talking about it much like they would a Netflix series, discussing the characters’ motives and their feelings towards the storyline.

People are genuinely emotionally invested in the story and if you stumble on the series now it’s pretty binge-able.

Guys, catch the Margot vs. Lily series! Saw it on ETC and I can relate to it a lot :)

New addiction: Margot vs Lily. And I think I & @nadiaatmaji can relate to them (I am the Margot obviously & Nadia isn’t as pathetic as Lily)

Nike has done a brilliant job of creating relatable characters that audiences are responding to positively. The ability to plant a brand comfortably in the lifestyles of viewers is the aim of many advertising campaigns and Margot vs. Lily is arguably taking things to the next level.

While it might be a little cheesy at times in this writer’s opinion, Nike have successfully set up a campaign that speaks to millennials in both form and content.

It seems to have worked.

While millennials may hate being marketed at, some people are delighted that they can buy some of the Margot vs. Lily lifestyle for themselves.

@nikewomen Where can I get those lily vs margot t-shirts?

That Margot vs Lily @Nike YouTube series is so cute. Makes me wanna workout. Gotta get some gear now.

Continuing to market via video series may grow a more loyal community and introduce a more intelligent way to crack the millennial generation.

As a millennial myself, who found Margot vs. Lily through a promoted Facebook post on my newsfeed, I must say that I am among those keeping a close eye on the new Nike initiative.

Are series the way to go to promote ideas, lifestyles and products? I guess we’ll see.