With both albums dropping on the same day, who wins the battle of the hashtags between One Direction and Justin Bieber? We've got the data.

Luckily the internet survived and we were able to pull some data from the aftermath.

The albums are big news for the collective princes of pop.

For Justin, the release of this album, Purpose, is just one rung on his redemption ladder, making up for his antics over the years.

As for the 1D boys, they have been through a lot in the past year with Zayn, the beloved, leaving the band.

Subsequently, the remaining members announced their planned hiatus from the spotlight, which is to come sometime next year. If you wanted to look beneath the surface, Made in the A.M. is like a pseudo-farewell.

Redemption and abandonment are all well and good, but we wanted to know more.

So, in true React style, we got to work dissecting the custom emojis Twitter had launched for the artists and songs.

Research: We Know Exactly How You Like Your Eggs in the Morning

Battle of the hashtags

Now we’re not saying that hashtags can settle this battle, even though those funny looking symbols are extremely important in terms of social language, determinants of success they are not.

But, they do give a pretty good indication of the state of play.

Six days (12th-17th Nov), two hashtags, one victor or, should we say One Direction? The British boys took the win by a landslide.

This got us thinking, so we decided to dig deeper into that data to try and determine who, or what, is deciding the fate of these multimillion dollar hashtags.

Drilling down on location we can see that there were only two countries in the entire world where #Purpose overtook #MadeInTheAM.

Those countries, funnily enough, were Ecuador and Indonesia. Even in Canada (Bieber’s home turf) the One Direction album got more attention online with a hefty 4,423 mentions, compared to Purpose’s 984.

Unsurprisingly the One Direction boys fared the best in the UK and Ireland – their home countries.

Naturally both #MadeInTheAM and #Purpose received the most mentions from the US with 44,801 and 19,225 respectively.

It shouldn’t come as a surprise to anyone that the majority of 1D fans were female, 77% to be exact over the six day period.

Squads of smitten girls have loyally followed the band ever since their first appearance on the X Factor stage all those years ago. In fact, 9,781 out of 49,192 mentions contained the word “love”.

The power of hashtags

Seen as Twitter generously allocated custom hashtags we thought it to be a good idea to capitalize on the trend to determine the internet’s favorite One Direction-er. Yeah, we went there!

So, we took each of the hashtags and isolated every member (by excluding the others from the search string), the results were clear – #1DNiall.

We felt kind of bad for Zayn, the noticeably absent former band member, so we decided to see if the internet felt the same.

While the pro Zayn camp proudly defend his honor the other side are much less forgiving. 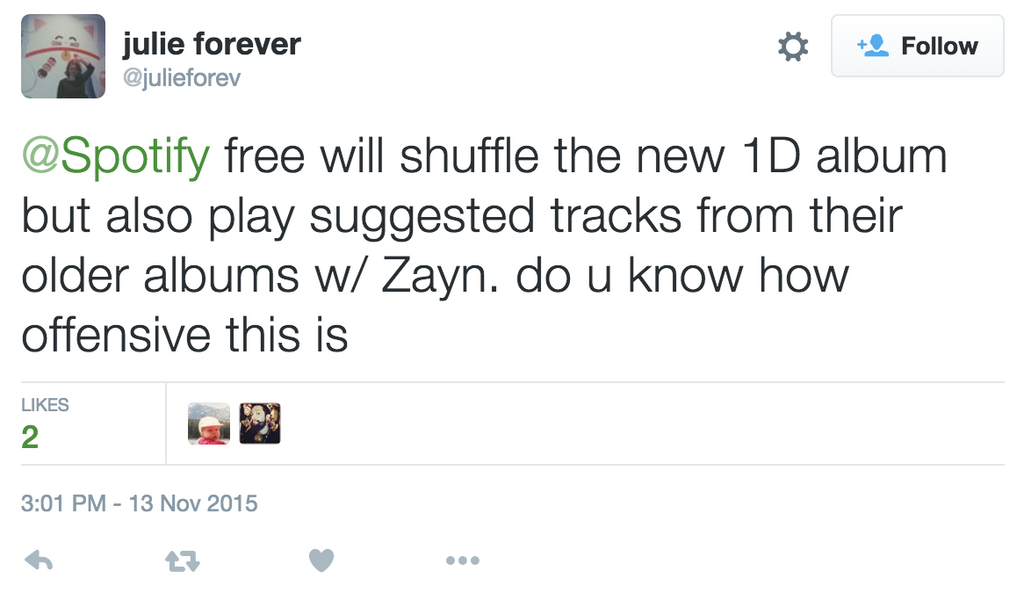 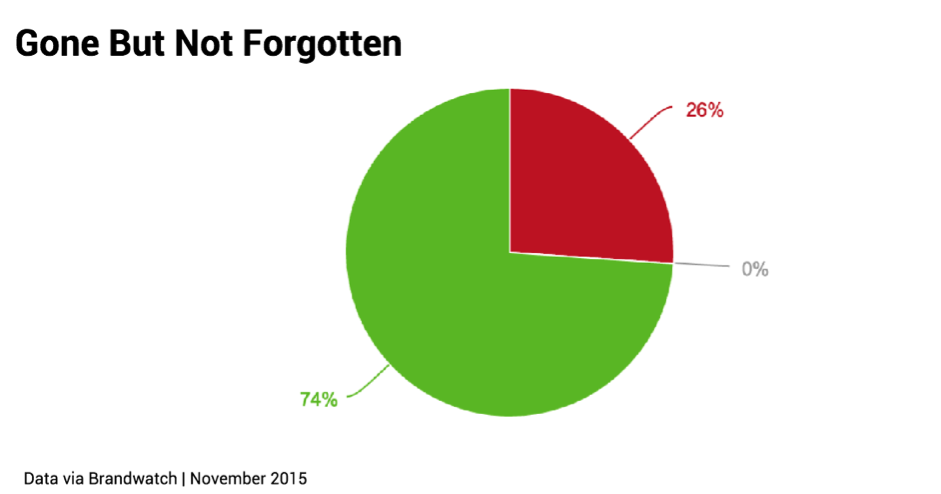 Back to Biebs – the overall sentiment for #Purpose was resoundingly positive at 91% but we wanted to determine the most popular song, as chosen by social media. Justin Bieber’s collaboration with the American singer-songwriter, Halsey, on The Feeling clearly went down a treat.

It remains to be seen whether or not social media will correctly predict the winner of this showdown but at the minute it is looking unlikely; Bieber’s Purpose has overtaken the One Direction album and is on its way to being the most successful album ever for the Canadian.