Millennials have an obsession that is as green as the avocado toast that’s supposedly bankrupting them: house plants.

Plants have always been a useful and decorative friend to humans, but they’ve taken on a new meaning in recent years. Cheaper and less high maintenance than pets, house plants are filling a void in millennials’ hearts and homes.

Why this explosive growth in popularity?

How come plant ownership has gone from your hippie grandmom’s pastime to a must-have for urban millennials?

One reason might be that, for many millennials – especially those living in increasingly congested cities, home ownership is out of the question. Rents are on the rise, and oftentimes, it is hard to care for pets in small apartments (and sometimes not permitted). Plants can bring life to a little apartment and give the owner something to care for.

But there are other reasons, too.

If you’ve spent a lot of time on social media, you’ll know that millennials love to share tips on and pictures of their photogenic plant children. Examining social data around plants can help us unearth why they have slithered their way into so many homes, identify trends for house plants, and pinpoint the shifting demographics for house plant parents.

For our analysis, we analyzed posts Twitter and forum posts from 2010 to 2019.

Plants were not always the scene-stealing social media stars they are now.

Plants are obviously conversation starters, but what are people talking about when they’re talking about plants? Looking at the word cloud, we can identify the most prominent topics in the discussion. 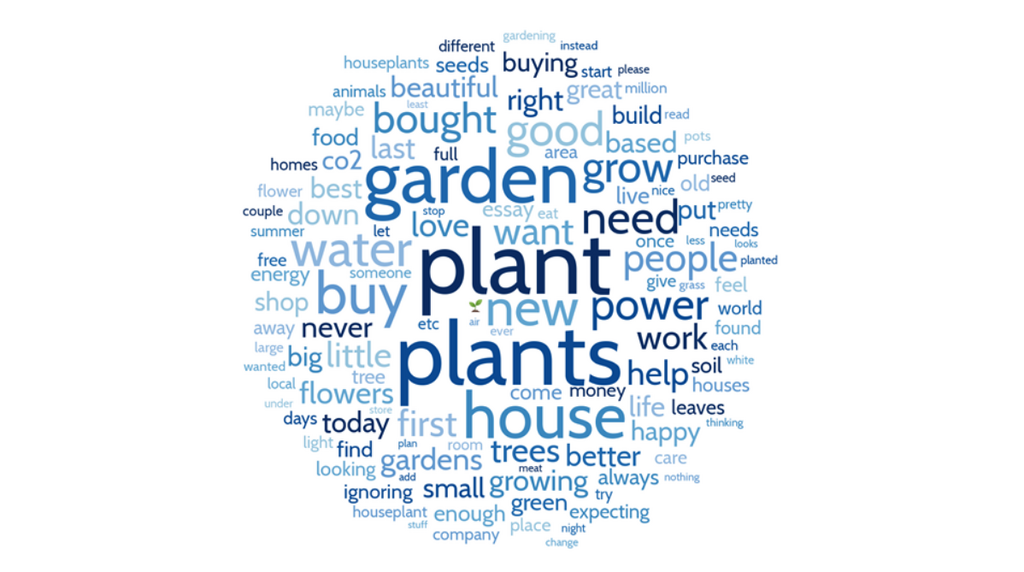 Looking at this plant word cloud containing posts over the past month, we are able to decipher what people discuss regarding plants.

We found that deciding on what plants to buy for their homes, figuring out how to grow plants for their gardens, questioning if their plants are pet-friendly, watering plants, getting enough light and sun exposure, assessing soil quality, improving air quality with plants, and basking in the happiness plants bring to them, were common topics.

Many say that plants brighten up their homes and reduce stress.

Maybe I should take myself plant shopping today. Might brighten my mood

U.S. Congresswoman Alexandria Ocasio-Cortez tweeted a video of herself planting corn with children in the Bronx, noting gardening’s therapeutic qualities.

These past few months I’ve discovered the joy of gardening. It’s therapeutic way to connect to the Earth & our food 🌎

I wanted to learn about community garden opportunities in the Bronx - so we joined @NYRP & some little ones to plant some corn in our Castle Hill garden! 🌽 https://t.co/SDr9YRERAt pic.twitter.com/326H4LeXyH

Meanwhile, it is not uncommon for plant parents to name their plants, as they would with pets.

House plant subscriptions have taken off in recent years–subscribers find them convenient. According to this Forbes article, the subscription box market has grown by more than 100 percent per year for the past five years.

What plants are people buying?

With so many plants to choose from, there are some tried and true favorites that come out on top.

Looking at data from 2012 to 2019, the top three most common houseplants are succulents, cacti, and aloe. These houseplants are low maintenance and require little water – in fact, it is easier to kill them with too much love than it is to kill them by not paying enough attention.

There are clear trends that have emerged over time.

Since 2012, succulents have become increasingly favored, while cacti seem to be going in the opposite direction.

Where are plant parents most likely to be located? What are the interests of those who have plants?

We checked out the data to find out. 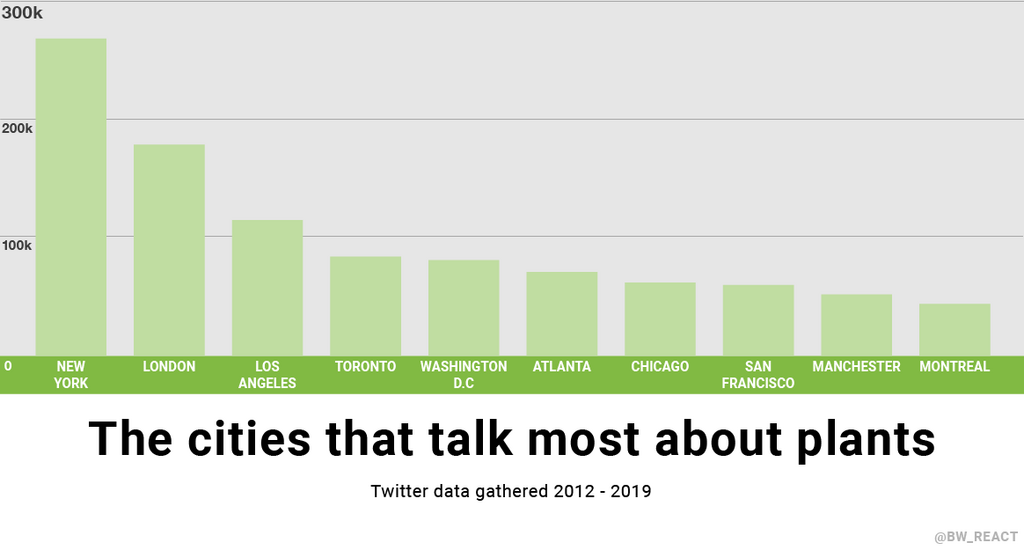 Our geographic analysis reveals the cities that are most enthusiastic about discussing plants on social media. New York dominates the rest, with London coming in second.

The interests of plant parents

Affinities reveal that plants appeal to people with certain interests.

Naturally, those talking about plants are in tune with nature, with interests in herb gardening, farming, wildlife, and ecology. They recognize the direness of climate change, with interests in sustainability and conservation. They are crafty and hands-on, with an affinity for interior design, crafts, cooking, recipes, Etsy, and home decorating. They seem to have artistic interests like museums, design, and visual arts. Interests in parenting, moms, and dogs also indicate some are not just parents to plants. Furthermore, they like wine.